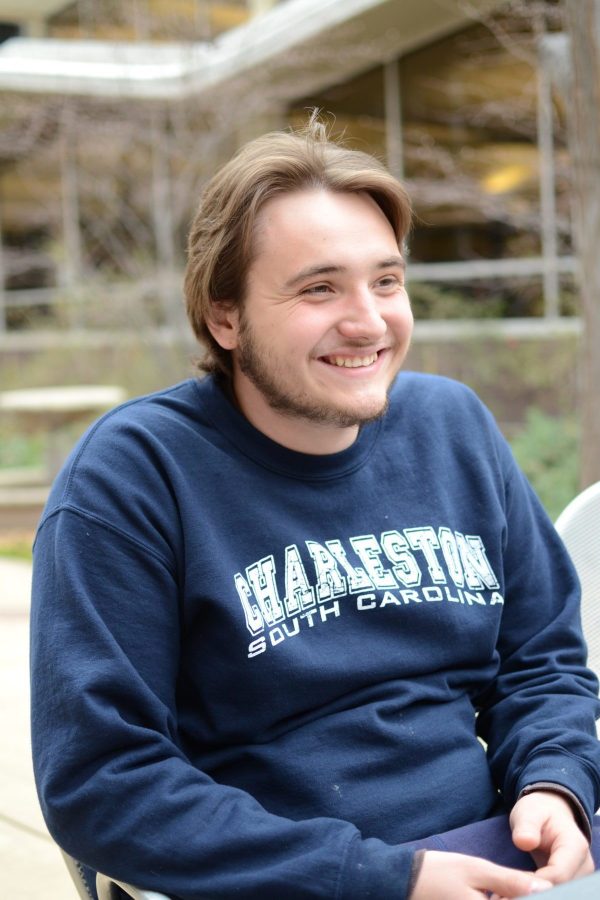 Owen Zielinski, a freshman double majoring in Biochemistry and Psychology, creator of the Survivor CSU series talks about the changes made in this season. Zielinski's goal is to unite the residents of Academic Village by breaking down any possible "Engineering vs. Honors elitism." Survivor CSU is in its second season titled Fans Versus Favorites CSU that puts a team of favorite competitors from last season against a team of fans of the first season. The teams will compete in a variety of challenges around Fort Collins with the losing team having to vote a teammate off the show, the last person left winning a $200 prize. (Matt Tackett | Collegian)

College can be a rewarding experience… if you can survive.

Students at Colorado State University created a student-run gameshow titled “Survive CSU,” similar to the popular television series “Survivor,” when participants compete against each other to build friendships and win a cash prize.

The show was created by Owen Zielinski, a freshman CSU student majoring in biochemistry.

There is sort of a dynamic between the participants. It’s funny to see alliances form, and then get destroyed when there is backstabbing.”

-Ethan Powers, a friend of Zielinski’s and a participant of the show

Zielinski, who works in the CSU Residence Hall Association, said the reason he created the show was that he “wanted to keep working in residence hall life” as he moved past first year.

“I was thinking about what I could make that would be fun and also benefit the residents,” Zielinski said.

The program’s first season, which ran in January of this year, originally pitted Honors and Engineering Aggie Village residents against one another.

“I noticed that in Aggie Village, there was a lot of engineering versus honors elitism without the two populations working together,” Zielinski said. “I thought I would make a program that’s kind of competitive but also fun. It kind of teaches these groups who call the same place home to work together.”

Owen is a fan of “Survivor” and has watched every season, said Ethan Powers, a friend of Zielinski’s and a participant of the show.

Powers said he greatly enjoyed his experience as a participant and said his favorite part about the show was watching the human interactions unfold.

“There is sort of a dynamic between the participants,” said Powers, a freshman majoring in electrical engineering. “It’s funny to see alliances form, and then get destroyed when there is backstabbing.”

As for events on the show, Powers had a definitive favorite.

“Definitely the event where we had to run through campus, blindfolded, at night,” Powers said. “That got a little interesting.”

Although the show has a very serious name, Aidan Lewis, another past participant of the show, said that “Survive CSU” is mostly for amusement.

“Really, we’re just kind of in it to have fun and hang out with people,” said Lewis, a freshman studying neuroscience. “You can be anyone from anywhere and still play the game and the diversity is what makes it really fun.”

The game is a way for students to blow off some steam and meet new people.

“There were about 20 participants, and some of the people I had never even talked to before,” Lewis said. “So it definitely brought us together, and I see them all the time now.”

“For the season two premiere, we went to Old Town where we did a scavenger hunt,” Zielinski said. “The participants had to go to various businesses and talk to them and ask them for info in order to find the finish line.”

Student life is busy and finding time for extracurricular activities can be a challenge, but Lewis assured that the weekly commitment is only around four hours.

“Really, it’s just a way to de-stress and have something to look forward to every week and have some friendly competition between people to make new friends,” Lewis said.

As for the future of the show, Zielinski says there is more in the works.

“We’re sponsored by RHA, but we’re not a registered student organization yet,” Zielinski said. “We’re spreading the word and maybe with season three we will look to make it a (Registered Student Organization).”

Collegian reporter Carson Lipe can be reached at news@collegian.com or on Twitter @carsonlipe