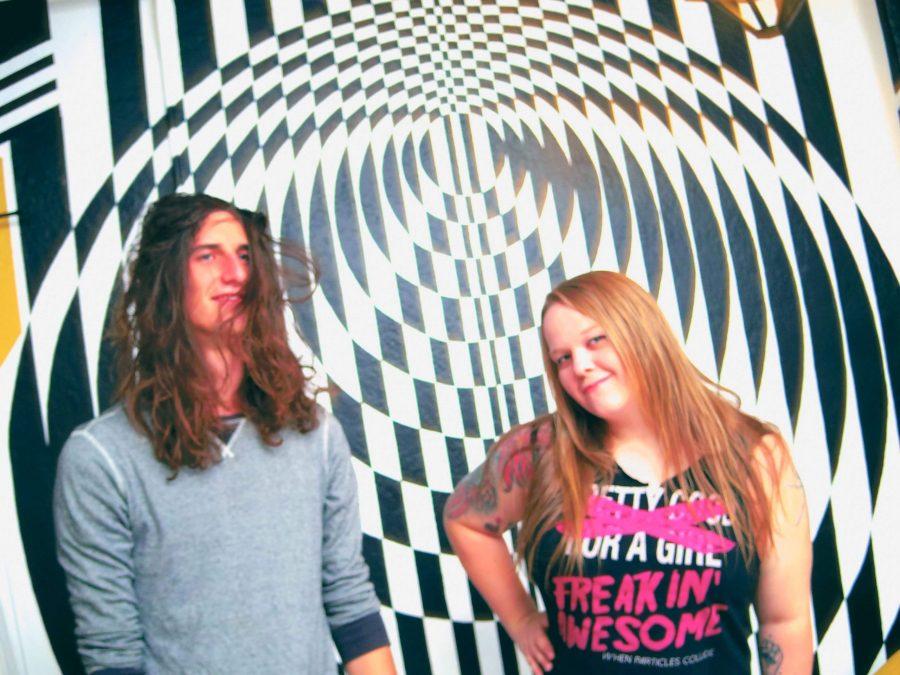 Plasma Canvas describes their genre as "loud," but notes Against Me! Brand New, and Motorhead as some of their punk rock influences. (Courtesy of Brandon Mccarron)

Plasma Canvas, a rowdy duo, is a part of the rising Punk scene in Fort Collins.

Ash grew up in Washington, Missouri, where xe came out as transgender three years ago. Ash said that after a year of dealing with hate and discrimination, xe moved to Denver in December of 2015 and then to Fort Collins a month afterwards. At the time, the goal was to transition and start a band, and within three months of the move Ash was on hormones and creating an album with hir band.

The self-titled album, described as “Dirty Femme Rock/Sparkly-Andro-Thunder-Punk” on the band’s Bandcamp website, is a compilation of songs written by Ash between hir journey from Missouri to Colorado and pertains to hir life and experiences.

“People have asked me if it is a concept album,” Ash said. “I really I was just dealing with sh*t. I was just journaling my life with music and with the flow of the music and the lyrics; it ended up telling a story.”

The vocalist and guitarist said that xe wants to tell stories that had not been told yet and to tell hir personal truth. The song “So I Was Thinking” portrays the first relationship Ash entered after coming out and hir first relationship with a cis-gendered lesbian. According to Ash, this woman saw hir for hirself, even though Ash was not on hormones.

Ash said xe wanted to be specific in hir music because there are countless love songs in the world, but none of them portrayed hir story. In the truest punk fashion, the musician sought to create counter-culture and resistant art through valid, loud representation. Xe did not see hirself reflected in media, so Ash made the media hirself.

Plasma Canvas makes a conscious effort to have as many 18 and up shows as possible to make sure younger fans are not excluded from their message and simultaneously seek to create an inclusive space for LGBTQ+ youth and beyond.

“Being a visible, queer, trans, lesbian person, I want to make sure everyone who is like me, or subconsciously thinks they might be like me, out in the audience, to know that this music is just for you,” Ash said. “The fact that other people around you like it is cool, but I am making music for the queer kids.”

Intolerance of any identity is not tolerated at Plasma Canvas shows. Ash said that Nazis have been punched and kicked out of venues during their sets, and the band is not afraid to call out racism, sexism, homophobia or any other hateful behavior at any point during their shows.

“I try to make a point to tell everyone at every show while I am on stage that they are listening to the gayest punk band in Colorado,” Ash said. “There’s no space for hate in my punk scene.”

Although McCarron is not the original drummer of Plasma Canvas, his musical talent as well as shared enthusiasm for Ash’s cause makes McCarron what Ash calls, “The right drummer.”

Prior to Plasma Canvas, Ash made music in several other bands but found hirself having to run lyrics by hir band mates to censor hir messages. McCarron, according to Ash, lets the band be what it is really about.

“I just want to make the weirdest, loudest, most angry, crazy punk rock that I want to make,” Ash said.

McCarron said he loves that about Ash, and shares the same wild musical goals. Sometimes the music gets so hectic, in fact, that McCarron breaks his cymbals. While recording their music, the band finds themselves worried about whether the cymbals will survive the duration of the day.

“I have been working on some sort of artwork incorporation with my broken cymbals,” McCarron said. “With all the stuff I am breaking in this band, I want to do some Plasma Canvas artwork.”

Another aspect that makes this team so solid is their shared outlook on their definition of what “punk” is. They believe it transcends simply the genre and a coercive sound but the culture of punk itself: doing what you want to do and treating people with respect, they said.

“It is so much more of an attitude than I would say a music genre,” McCarron said. “I do not know of a more inclusive crowd than a punk show.”

Plasma Canva’s self-titled album can be downloaded for free or by donation on their bandcamp website, and both the self-titled album and their acoustic EP “Pretty Little Things” can be streamed for free on Spotify. The band is working on another EP currently that will release late this spring. They will perform Jan. 27 at Seventh Circle Music Collective in Denver with DNR, a Punk Rock influenced interpretive dance troupe.