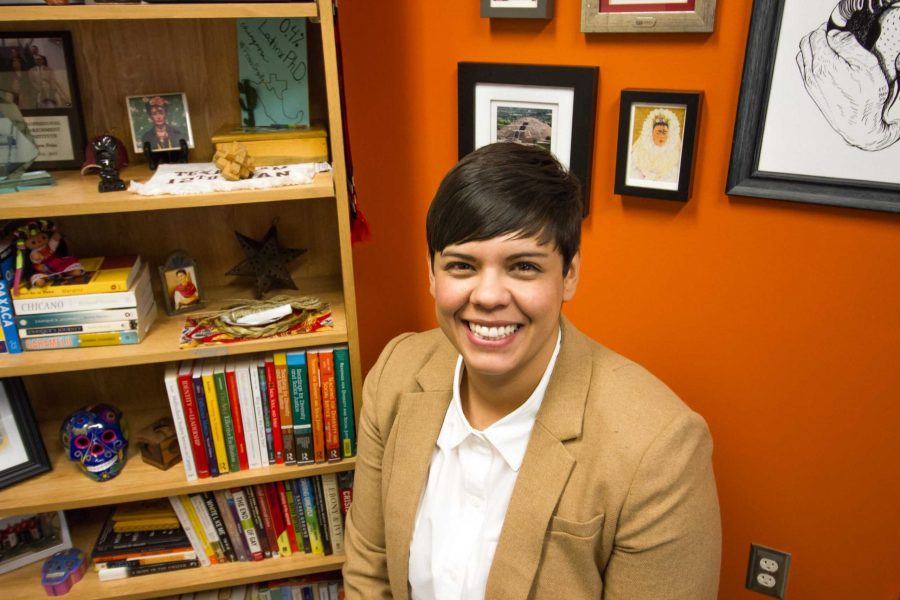 Dora Frias, the new PRIDE Resource Center Director is seen inside her office in the PRIDE center. (Tony Villalobos May | Collegian)

With the goal of representation and intersectionality, Dora Frias is taking over as the new director of Colorado State University’s Pride Resource Center.

Frias started the position in October. Because of this, she is working on getting her feet planted at CSU and understanding the needs of LGBT students at the University.

“I’m also still figuring out what we’re doing, how we’re doing it and then what direction then we’ll take,” Frias said. “So it’ll take me a minute to figure all those things out, but I want to spend some time getting to know the students first.”

“I appreciate Dora’s background of experiences,” Kathy Sisneros, assistant vice principal of Student Affairs, said in an email. “She serves as a leader on a state, regional and national level for our Latinx and queer students, and I believe that her commitment to advocating for students from a social justice lens is very much a strength.”

Emily Ambrose, the assistant director of the Pride Resource Center,   describes Frias as “collaborative” and “driven,” and attended graduate school with Frias at CSU.

“Being friends before and transitioning to colleagues we both come with an awareness of our roles and approach (working together) from a team context,” Ambrose said.

Frias identifies as both a member of the LGBT community and as a Latina.

“Both of these identities for me are equally important,” Frias said.

“They inform each other; I am not one more than the other.”

Fries has taken note of the University’s large population of white students.

“There’s also a piece for me working at a predominantly white campus as a queer person of color,” Frias said. “I want to be the me that I never had as an undergrad. I didn’t meet someone that looked like me that held my identities until I was 25, until I came here. And that’s too long for a young queer person not to see themselves reflected as grown folks.”

Intersectionality describes the interconnectedness of power structures and discriminations. It was first coined by legal scholar and renowned Black Feminist Kimberlé Crenshaw in 1989. Frias hopes to bring a stronger awareness to this concept through her new position.

“Dora will also be very intentional about making sure the Pride Resource Center is an intersectional space for students and continue to make sure that the center is one where students who identify along the continuum of gender expression find a place of support and validation,” Sisneros said.

Needing to discuss intersectionality holds an importance on a college campus and especially within resource centers.

“A needed breath of reality and intersectionality comes in with an intentional framework around supporting and advocating firstly for students,” Ambrose said.

Because of her background, Frias feels this element of balancing identities on a personal level. She was born in Durango, Mexico, and grew up in El Paso, Texas, near the border of Mexico.

Frias seeks to make this a space for all LGBT students. She recognizes that the Pride Resource Center only sees a portion of these students and that these individuals often interact in different parts of campus.