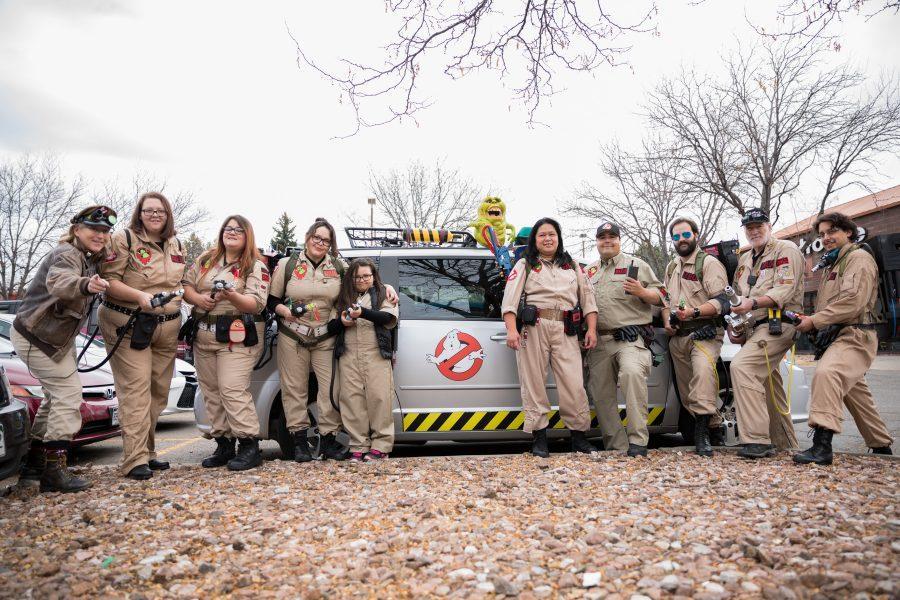 Ghost Busters at meet and greet in front of their Ecto car. (Jordan Reyes | Collegian)

Whether you are a fan of science fiction or not, chances are, “Ghostbusters” is a movie that we can all check off our lists. The original film is 33-years-old and has had a positive impact on many generations since then.

One particular group of superfans in Fort Collins chose to turn their hobby into something for the community, a way to give back.

“I had a friend that wanted to start dressing up as a Ghostbuster for comic conventions,” said Alex Warner, the co-founder of the group. “We started doing some research and found out that there are actual charitable groups all around the world that dress up as Ghostbusters and go to events.”

Now, that is exactly what Alex and his team do. The 13-person squad will dress up in full Ghostbusters regalia—proton packs and all—and participate in events around town that raise money for charities.

Most notably, they participate in Fort Collins Comic-Con every year, which raises money for the Poudre River Public Library District to promote youth literacy. According to the group, they have helped raise nearly $85,000 for the District over the last three years.

“Beyond ambiance, the Ghostbusters provide a fundamental foundation of community that just can’t be replicated or easily replaced,” Armstrong said. “They’re committed to inclusive fun and it shows through in everything they do for us and the community at large.”

They are not just in it to dress up as their icons either. Mayette Eggleston, a member of the group, loves to do it just to make people happy.

“The best part is seeing everybody who recognizes the Ghostbusters,” Eggleston said. “Seeing them smile, bringing them back to their childhood, it’s the best feeling ever. It’s kind of the reward for us dressing up.”

The organization, which is one of over 150 similar organizations around the world, is actually certified by Sony, the company responsible for the production of the “Ghostbusters” franchise.

Their pride in their work is obvious, as they each have a beige jumpsuit, a homemade proton pack that lights up and whirs—likely costing only $10 to make no less, and an “Ecto,” which is what they refer to their van as. The van is decked out in Ghostbusters swag including lights and sirens, echoing the vehicle driven in the original movies.

To top it off, the group is based out of Warner’s home, and the basement could serve as an entire Ghostbusters museum on its own. The walls are lined posters featuring Bill Murray, Melissa McCarthy and more; bookshelves are filled with action figures, and memorabilia; patches from all of the other certified Ghostbuster organizations; and an enormous cardboard cut out of the Ghostbuster logo.

Beyond their charity work and their super fandom, the Fort Collins Ghostbusters strive to make a social impact as well.

Warner remembers growing up believing that adulthood meant giving up all the fun parts of childhood, but now that he is a real-life Ghostbuster, he has a different idea.

“Now when I drive the vehicle around, I want kids to be inspired and say ‘you can dream, can do stuff, you don’t have to do give up the childish stuff,'” Warner said. “You can embrace who you are and love it. If you love it, be it.”

Similarly, the group likes to advocate for women, subscribing to the belief that women can bust ghosts—or do anything for that matter—just as well as men can. The group is over half female, including eight-year-old Kiki Soto, the group’s junior Ghostbuster, who found it “super exciting” to see women Ghostbusters on the big screen.

Teresa Soto recounted a time that she marched in a parade in full costume and got a nasty comment regarding her gender from someone in the crowd.

“I said ‘what’s wrong with women Ghostbusters?'” Soto said. “He didn’t have much to say after that.”

Although they don’t actually save people from ghosts, between their social impact and charity work, it is safe to say that for some, the Fort Collins Ghostbusters are truly local heroes.

Find the The Fort Collins Ghostbusters on Facebook at facebook.com/FortCollinsGhostbusters.