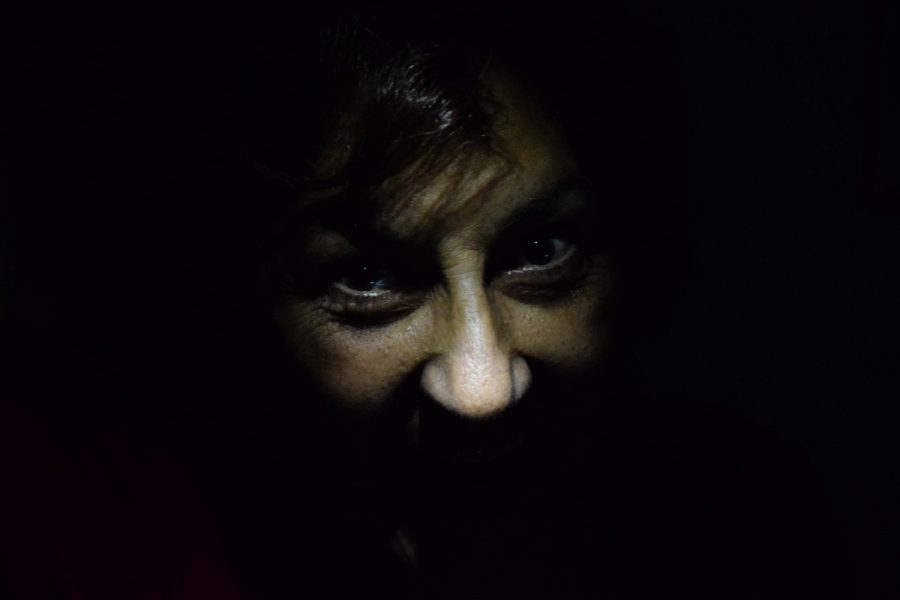 A dark face in the shadows. Photo provided by pxhere.

Krista Thaxton never thought she would be the kind of person who would tell personal ghost stories.

Thaxton is a senior Spanish and sociology student at Colorado State University. Her paranormal journey began when she met a friend in Spanish class named Lena Stroud, a biology student who lived on the fourth floor of Braiden Hall on the northwest side. Something—or someone—subtly tormented Stroud and other residents on the floor, according to Thaxton.

“I went into her room, and it was terrifying,” Thaxton said. “You just felt really scary, and you know, you would just get that feeling. It was scary, so I was like, ‘Yeah, we are not coming up here anymore.'”

Thankfully, Thaxton never experienced first-hand the terrors of Braiden, but she became heavily familiar with the stories. Stroud’s room was supposedly plagued with a dark figure that manifested underneath furniture and in the corner of her room. The figure had a dark, mask-like face and a taste for insighting fear and anxiety, she said.

Stroud shared a joint bathroom with her sister during her time in Braiden, and recounted a time in which she was awoken in the morning by her sister pacing the bathroom that connected their rooms, slowly stepping into Stroud’s room each time. But, when Stroud would look up to see her sister in her room, no one was there. Frustrated and groggy, Stroud left her bed and walked into her sister’s room to ask her why she was pacing and did not like the reply, Stroud said.

“She very creepily said, ‘You heard it too?'” Stroud said. “Now her side of the story is she was studying and thought I was doing the same thing to her, just walking in between the bathroom and her room, and suddenly stopping. She said it lasted 15 minutes, but she was too terrified to say anything.”

According to Stroud, whatever haunted her room traveled throughout the hallways of the dorm, as well, and had a tendency to climb up onto beds throughout Braiden and aggressively shake them.

“One night I was on my phone, and it hit my feet, smacked them,” Stroud said. “I slept in fetal position for the rest of the year.”

When sharing her experiences with her parents, Stroud was met with belief and support from her mother, who has also experienced paranormal happenings, and complete disbelief from her stepdad, who believes the happenings in Braiden hall were all made up. Thaxton experienced similar doubt from her mother when she shared her interactions with the undead, even when Thaxton moved into a haunted apartment of her own.

Thaxton moved into The Summit on College during her sophomore and junior year. The haunting started with small things, such as her belongings being displaced and her bedroom stereo turning on to loud music the moment she returned home.

“I would be like, ‘That’s weird, that’s weird timing, I don’t like that,'” Thaxton said. “But I tried to tell myself that maybe there was an alarm set or something, so I cleared everything out of the stereo, but it kept happening for two weeks in a row.”

As Thaxton and her roommates continued to live in the apartment, the seemingly weird timing only became more confirmed as spooky happenings. In one instance, Thaxton witnessed a roommate’s exercise ball begin to move on its own.

“We were like, ‘Oh, maybe there’s a slope on the floor,'” Thaxton said. “You know, we were trying to rationalize it, but we couldn’t because it started rolling.”

Despite the ground being even, the exercise ball proceeded down a hallway and stopped right in front of Thaxton’s bedroom door. Thaxton said that her and her roommates have tried to duplicate this instance again by pushing the ball from where it originally started moving, but to no avail. Something unhuman rolled the ball, she said.

Because the original ghostly instances did not seem malicious, just strange, Thaxton and her roommates decided to affectionately name their ghost Penelope.

“I was a little creeped out at first, but honestly because these things happened pretty regularly over two years; it kind of became a joke,” said Jensen Woods, a senior communications studies and interdisciplinary arts major who lived with Thaxton in the haunted apartment. “There was one night, though, we were pretty scared because weird noises kept coming from the end of our hallway. We tried burning sage, but it did not really do anything.”

Thaxton’s personal experiences were not always so harmless, and she believes much of the haunting was directed at her personally during her time in the apartment. One day, upon coming home from school, she found that the straps on one of her backpacks burned off and melted in half. Thaxton tried desperately to find a way that the burning would have been started by natural causes. No candles burned near the bag, no heating unit scorched its fabric, no overbearing, super-nova sun shot through the window like a hyper-beam. There was simply no explanation.

Since leaving the apartment and Braiden, Stroud, Thaxton and her roommates have not experienced any more paranormal disturbances, but avidly believe in the paranormal because of what they have witnessed in their college years, despite possible pushback.

“To people who do not believe in ghosts: You simply have to experience it,” said Stroud. For those who do: “Just know you are not crazy. Sleep well, and find others to validate your experiences.”

Phaedra Tisch-Calabaza is a paranormal scene investigator in Fort Collins and can be reached at catcala@comcast.net.

Collegian reporter Miranda Moses can be reached at antertainment@collegian.com or on Twitter @mirandasrad.