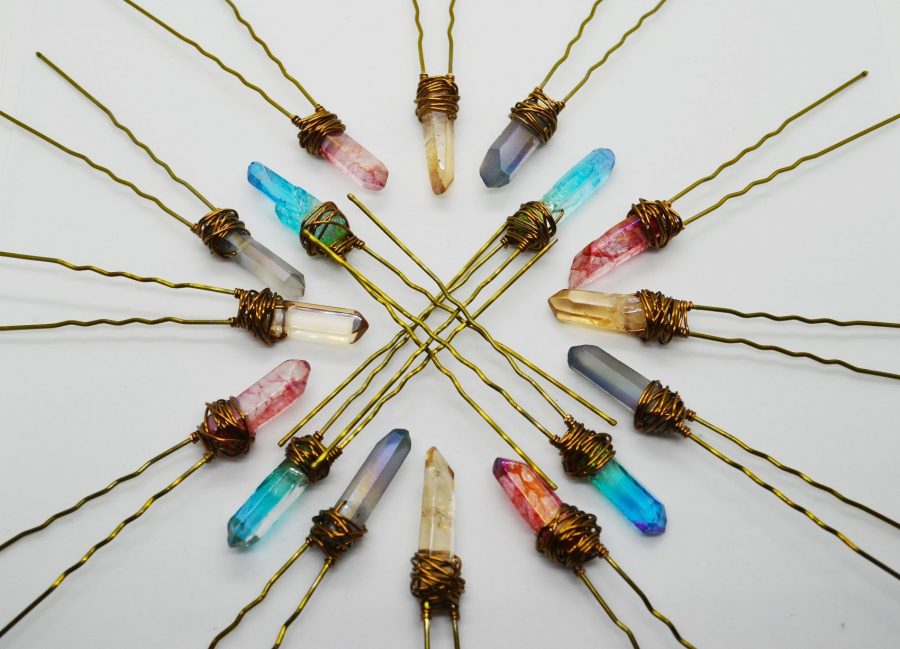 Aleksandra Novak sees the beauty in everything, even dead animal parts.

Novak, a second-year geosciences Ph.D. student at Colorado State University, designs hair accessories comprised of crystals and taxidermy for her Etsy shop, GemsAndBones. A recent addition to her collection features antlers poking out from a crown adorned with naturally derived crystals and roses. For some, this may seem like an odd combination, but the blend of femininity and ruggedness has attracted more than 2,000 customers since the shop opened in 2014.

Novak said she began making art at five-years-old. Growing up in Magadan, Russia, Novak designed and sold beaded jewelry at craft fairs. She started profiting from her creations in middle school.

“It was exciting because I could make money and then spend it on more supplies, or I would just buy candy,” Novak said.

Aleks Novak stopped designing jewelry in high school when she became distracted with “being a teenager.” She attended Moscow State University where she received her bachelor’s degree in environmental geology. Novak planned on entering the petroleum geology industry in Russia after graduation, but an oil crisis forced her to reconsider.

“I graduated at the peak of the crisis,” Novak said. “I decided I might as well go back to school and get a job when times get better.”

Novak received her master’s degree in marine geochemistry from Mississippi State University. While

living in Mississippi, Novak visited a quartz mine. This is where GemsAndBones began.

“We were in there with buckets and hammers like serious miners,” Novak said. “I brought out a lot of really cool crystals. … I brought them home and cleaned them, and then I was like, ‘What do I do with them now?’ I didn’t want them to sit on a shelf. The idea came into my head to make a crown.”

Novak got some wire and wrapped the crystals together. The end product featured several shiny, clear gems aligning the front of the crown. This was the first piece in the GemsAndBones collection, but Novak did not know it at the time. She kept the crown for herself with no intention of selling it, until one evening when her friend Oindrilla Paul, a fourth-year biological sciences Ph.D. student at Mississippi State University, saw the crown and suggested Novak sell it on Etsy.

“I was amazed by the beauty and uniqueness of her work,” Paul said. “…Her artwork is one of a kind. Everything is so unique and exquisite. That’s what I love about her work, and that’s what made me suggest she join Etsy and sell them there. I thought people would appreciate her work there better.”

Novak said she saw no harm in trying.

Novak said she was surprised by the response. She purchased more supplies and listed several crowns and hairpins.

“Some of the Etsy editors noticed it, and I was featured several times,” Novak said. “And then more and more people started finding out about it.”

As GemsAndBones grew in popularity, Novak’s designs became more diverse. She transferred to CSU for her doctoral studies last year and started incorporating taxidermy parts like bones, antlers and teeth.

“When I say ‘parts of animals,’ it sounds kind of creepy,” Novak said. “I lived in the northeast (part of Russia). Cultural, traditional folklore things were pretty big there. You incorporate fur and bone pieces. A lot of things that I involve in my work are from there.”

Novak said her accessories are typically purchased for special occasions.

“My hairpieces are mostly bought for weddings, or festivals or photo shoots,” Novak said. “A lot of kids rock my hairpieces. A lot of people get them for quinceañeras. I’m not from America, so I had no idea what that was, but my friend told me to market it for that. It’s becoming a trend.”

On average, there are between 70 and 80 hair accessory styles listed in the GemsAndBones shop. The pieces are made to order. Customers coordinate with Novak on a color scheme once they select a style. Prices for hairpins start at $3, and prices for crowns start at $32.

The most expensive item in the shop is a crown for $350.

The GemsAndBones motto is “Crystal Hair Accessories with the Energy of the Rockies.”

“It’s all natural and made by hand,” Novak said. “When people contact me, and I work on the hairpiece for them, I think about this person. And so many people get back to me and say they feel the energy. … It’s not just energy of natural crystals. It’s also energy of person to person.”

“I love how unique and feminine her pieces are without being too over the top glitzy or glam,” GemsAndBones customer Rachel Abrahams said. “Her crowns and hair pieces standout but don’t look like the typical bridal or pageant hair pieces. … Aleks has been a pleasure to work with, and I am so excited to see the final outcome of the custom crown that she is making for me for Halloween.”

As a Ph.D. student, Novak said she has to prioritize her studies.

“A lot of people have been messaging me like, ‘Hey, can you make me a crown? My wedding is next week,’” Novak said. “I don’t want to disappoint people, so I do my best. But sometimes that’s just not possible. It’s like, sorry guys; I have to take a nap.”

“Your brain rests while you make things,” Novak said. “I like to have something that helps me get away. You can think about research all day, and you’ll probably go nuts.”

“When Aleks was a child, it always made me feel very proud seeing her succeed,” Julia Novak said. “As an adult, Aleks keeps making me feel even more proud, she’s got an incredible imagination and ability to transform her creative vision in the form of art.”

Novak plans on working in the natural recourses field when she graduates but said she will maintain GemsAndBones as an artistic outlet. Although the shop may decrease in size, Novak said her childhood self who spent hours carefully beading jewelry for candy money would be happy to see her grownup self creating art while still achieving her educational dreams.

“If I saw myself doing it right now, I would be proud but also surprised,” Novak said. “I would probably be like, “Oh my God, is that me?”

Collegian arts and culture director Randi Mattox can be reached at entertainment@collegian.com or on Twitter @randi_mattox.