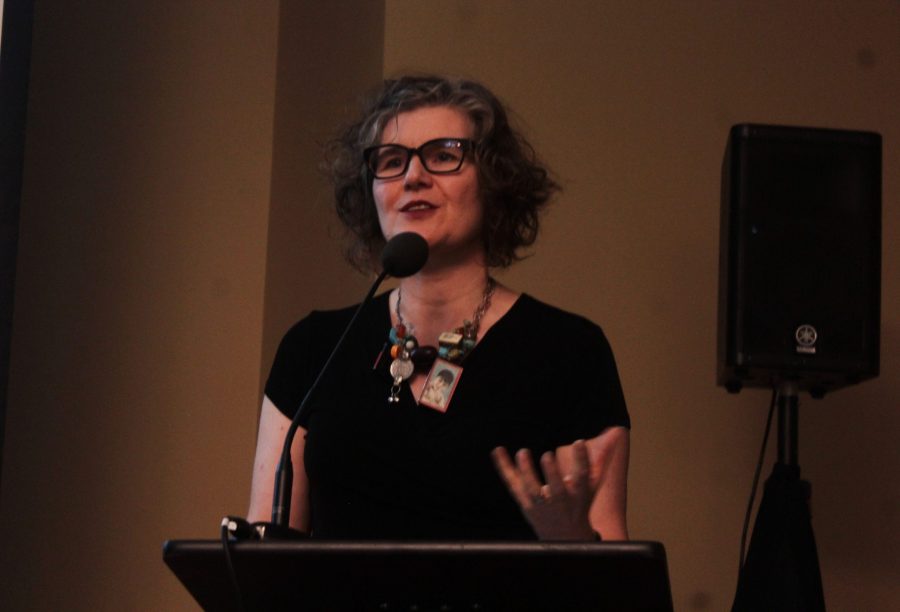 The conversation surrounding clothes and environmentalism is one the Fort Collins Museum of Art is trying to have.

“ReDress: Upcycled Style” is the latest exhibit at the Fort Collins Museum of Art. This exhibit showcases works by artist Nancy Judd who has created dresses, shoes and purses entirely out of recycled materials.

The museum’s brochure about the exhibit describes it as “glamorous, shimmering evening gowns, appearing as fine couture and refined garments.”

“She posts how many hours it takes her to work on them, 200 to 600, (which is) kind of underscoring how long it takes to make something that is so beautiful and handmade and different from how clothing is created in our culture today,” said Lisa Hatchadoorian, the executive director for the Fort Collins Museum of Art.

Despite crafting many dresses for this traveling exhibit, Judd does not consider herself a clothing designer; she is an artist and an environmental advocate.

One of the main purposes of this exhibit is to educate and demonstrate the amount of waste produced. According to Judd, the clothing industry is the second biggest polluting industry in the world.

Growing up in Portland, Oregon, Judd has been connected to the environment since childhood.

“In nature there’s no such thing as trash; there’s no garbage,” Judd said. “When a leaf falls to the ground it becomes a feed source.”

Judd also grew up around art. Her mother, who passed away earlier this year, was an artist who later became the president of an art school. With this influence, Judd had an artistic streak as a young girl.

“My first recycled fashion, though, I created for my little teddy bear,” Judd said. “I used to make it little dresses and outfits from scraps of material.”

In a speech given by Judd on Sept. 8, she discussed how the fashion industry’s relationship with the environment is not its only issue. Judd spoke about how clothing is manufactured internationally in many places that are not treated humanely and how that is a social justice issue that should not be overlooked.

“Other human beings are paying for our cheap fashion,” Judd said.

Being such a sustainability focused area, this type of exhibit is perfect for a Fort Collins audience.

“Fort Collins prides itself on being sustainably oriented city, so this is looking at it from an artistic viewpoint,” Hatchadoorian said.

While some of the U.S is battling wildfires and other parts are struggling with flooding, the environment is not something we can ignore. This exhibit uses an unusual method of showing this message of environmental activism.

“People don’t necessarily always think of art as a medium for messages like this,” Hatchadoorian said. “It’s beautiful and not a bad place to start.”

In her speech, Judd talked about the ways to combat the wastefulness of the clothing industry, encouraging people to not buy from chain stores, support local store, buy organic and durable clothing, and to never, ever throw away clothing.

“I want to encourage everyone to reclaim fashion as a form of personal creativity and resistance to consumerism,” Judd said. “Be a real rebel and wear practical clothes that last a long time and are comfortable.”

This exhibit is not to necessarily show how much waste is produced but to reframe the way we think of what waste is.

According to the museum’s brochure, “she encourages people to look differently at trash, to see garbage not as waste but as wasted resources.”

“ReDress: Upcycled Style” will be up through October 22.