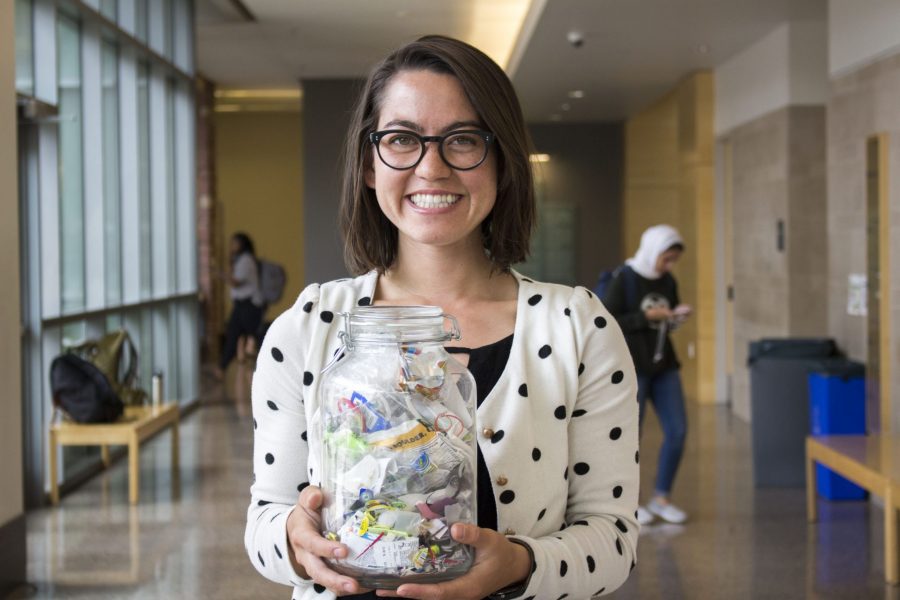 Marie Taylor, a senior Anthropology major, lives a minimal-waste lifestyle and holds a trash jar that contains all her nonrecyclable, noncompostable trash since January of this year. (Brooke Buchan | Collegian)

Marie Taylor takes out the trash once a year.

While the average person produces approximately 4.6 pounds of trash per day, according to National Geographic, senior Colorado State University student studying anthropology and archaeology decided to change that number for herself. Taylor and her husband, Sean Babbs, have been living a zero-waste lifestyle since March 2016. Now they take the trash out once a year.

After meeting Andrea Sanders, director and founder of bezero.org, and touring Sanders’ home in Boulder, Taylor realized that she wanted to live a zero-waste life, she said.

A zero-waste lifestyle means making choices every day that create the least amount of waste. Rather than buying plastic containers, Taylor buys glass containers. Instead of throwing out produce waste, she adds it to her backyard compost. After all the lifestyle changes, Taylor and Babbs have made only 16 ounces of trash this year.

“I like having less of an environmental impact,” said Babbs, a Colorado State University alumnus. “I think that’s the big thing. What I really try to do is avoid using one-use plastics.”

Learning about and living a zero-waste life was Taylor’s gateway to becoming what she calls an everyday activist.

“I try to think of all these choices as votes, or as me expressing my opinion,” Taylor said.

The amount of trash humans create is damaging to the environment; each choice has the potential to affect the environment and create waste. By buying produce from a Community Supported Agriculture, Taylor has been able to reduce her produce trash. Fresh fruit and vegetables do not come with stickers as they do at grocery stores. Those stickers, as well as the plastic bags provided for fruit and vegetables, are not recyclable or compostable.

“We live in a world that doesn’t really enable us to live like we do,” Taylor said. “So it’s not fair to try and be really 100 percent zero waste, but I think making choices that minimize it is the important part.”

“I do think it’s kind of rewarding if you’re into environmental problems or things like that,” Babbs said.

To start living a zero-waste lifestyle, Taylor recommends keeping track of your trash. She said that it is so easy to throw something away and not look at it, but when you force yourself to look at the trash you are throwing away, you notice changes you can make.

According to Stephen Gillette, Solid Waste Director for the Larimer County Landfill, an average of 1,200 tons of waste are taken to the landfill six days a week.

If the same amount of trash continues to be taken to the landfill each week, then by December 2024 the Larimer County Landfill will reach its capacity, according to Gillette. To minimize the amount of waste, Gillette said using reusable cups and plates is beneficial and simple.

“Reduce, reuse, recycle,” Gillette said. “Our society is based on throwing it away so we’re used to disposing of materials.”

Considering how trash affects the environment is also a motivational factor, and Taylor said there are documentaries and videos through organizations, such as the 5 Gyres Institute, that are worth watching.

“Just understanding that once you throw something away it doesn’t really go away,” Taylor said. “You can say minimize trash and protect the world but in the end, unless you see really what’s happening with it, you don’t really want to make a change in your life.”

Even seemingly small choices are beneficial. Every choice helps. If a zero-waste lifestyle seems daunting, remember that gradual changes are important too, she said.

“You don’t have to be minimal or even close to zero to take part in it,” Taylor said. “People think you have to jump in whole-heartedly but you can just have a to-go cup with you at all times. If everybody at CSU just brought their own cup, how much less trash we would have would be incredible. That could literally change the world.”

Collegian Reporter Gracie Ludens can be reached online at entertainment@collegian.com or on Twitter @gracieludens.