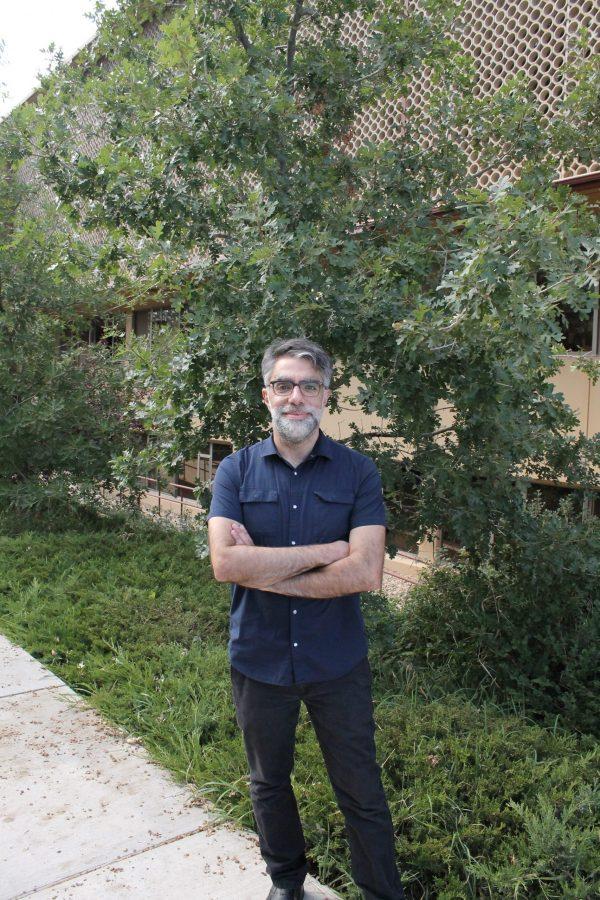 Usama Alshaibi is a visiting professor at Colorado State University and has a concentration in film studies.

Colorado State University professor and filmmaker Usama Alshaibi remembered an exchange from childhood, and the indelible mark that growing up in 1980’s Iraq left on him.

As a former refugee, Alshaibi has a background that few CSU students can immediately understand. Memories of armed conflict inform his filmmaking and give him a unique perspective as a teacher. His past puts him in a unique position to show his pupils that art carries empathy.

“This is the ability to bridge theoretical work with a practice, such as creating art while critically evaluating its meaning,” Dickinson said.

To Alshaibi, an artist cannot have one without the other.

“So you’re upset with how someone tells your story,” Alshaibi said. “Change it, and tell it how you want it. Think about it. You’re playing baseball, and a foreign army comes in to liberate you. What would you do to protect your family?”

“My students have a tough time seeing Chris Kyle from ‘American Sniper’ as an invader, but I want to shift the narrative,” Alshaibi said. “Look at the background characters in the crosshairs of that sniper’s scope. Bring them to the foreground.”

Alshaibi’s interest in humanizing presumed background characters is connected to his time at the Chicago History Museum. He was interviewed by Studs Terkel, an author, radio broadcaster and actor known for collecting spoken-word stories from average Americans. Terkel’s pulitzer prize-winning book, “The Good War: An Oral History of World War Two,” presented everyday people’s memories, from soldiers to farmers and prisoners. Terkel believed that anyone who had a story should be heard and remembered.

“I spent years digitizing his work, and Studs had a big influence on me,” Alshaibi said.

He would go on to create “Boy from War,” a documentary charting his own coming-of-age story during the Iran-Iraq War of 1980-1988.

Fearing that the 1979 Iranian Revolution could inspire a similar uprising among Iraq’s Shi’ite Muslims, Saddam Hussein invaded Iran the following year. This led to border clashes as the two countries vied for hegemony in the Persian Gulf. Iraq was backed by the U.S., the Soviet Union and France, great powers hungry for the usual natural resources. For oil and ideology, over a million civilians and soldiers died on both sides of the conflict.

“There is no way to convey trauma with numbers,” Alshaibi said. “But if I tell you about one kid, you know his name. And each personal story is a shard of a bigger story. You can understand what it was to be an Arab under Reagan, and maybe you begin to challenge the narratives constantly imposed on Muslims. Maybe you begin to see that those escaping war have no choice but to leave.”

The Iran-Iraq War’s eight years still stand as a testament to brutality, and there is good reason historians liken it to World War I. Trench warfare, bombing of civilian homes and use of chemical weapons were commonplace.

“When our house was bombed, I had this realization,” Alshaibi said. “To know that your parents can’t protect you, as a kid, is . . . well, it’s taken me a long time to begin addressing that. If you’re a kid living through war, you don’t care about flags and countries after a while. You just want to live.”

Alshaibi’s early adjustments to life in the U.S. were not always easy, and the state of modern refugees gives him pause.

“When people yell at you and discriminate against you in a country where you feel like ‘at least I have a chance,’ that is immoral,” Alshaibi said. “To vilify refugees, to see people fleeing danger as a danger themselves, it’s evil. It says that we’ve lost something as Americans.”

The best response to hate, Alshaibi said, is to speak to people in the universal language of feelings.

“American society responds on an emotional level,” Alshaibi said. “I want to empower my students by giving them a voice. I don’t want them to just sit back and critique. The path to understanding is to stand up front, listen to others and see their stories.”

Collegian reporter Ryan Greene can be reached at entertainment@collegian.com or on Twitter at @Ryangre75057034.