Colorado State University students participate in Drums Along the Rockies 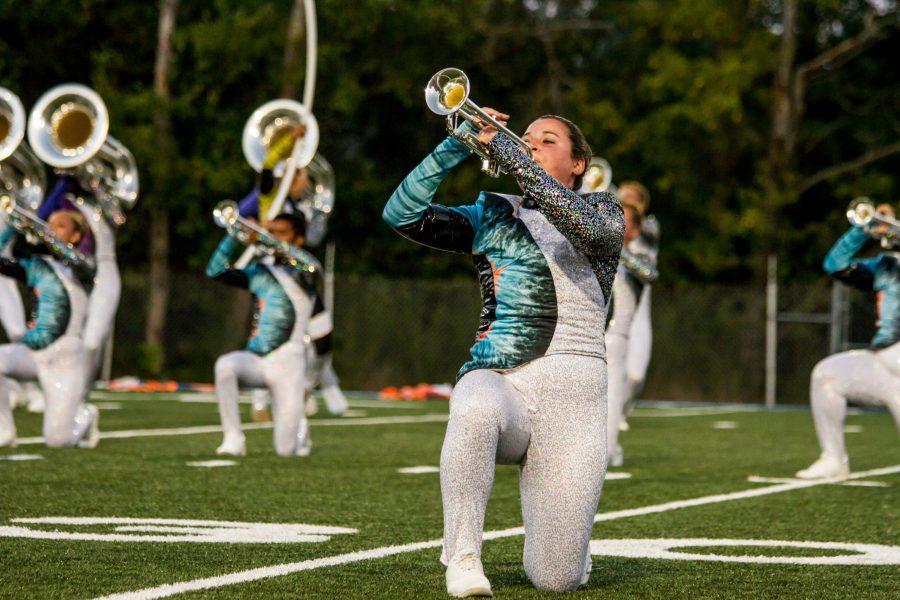 Sydney Brown, incoming Music Education major at Colorado State University, competes with the Blue Knights Drums and Bugles Corps as a trumpet player. Brown is in her third year with the Denver based corps which has ranked in the top 10 of internatioal drum corps throughout the last several years. Brown will be preforming in her "home show" Drums Along the Rockies on July 15, 2017. (Photo courtesy of Tony Villalobos May and Ascend Performing Arts)

Editor’s Note: The Rocky Mountain Collegian’s Photography Director Tony Villalobos May is an employee of Ascend Performing Arts and contributed the photos to this story.

Participants in Drum Corps International come from more than 15 countries

The annual Drum Corps International Tour, including the Drums Along the Rockies performance, is made up of more than 100 events throughout North America

A high-end performance with marching bands and sparkling outfits, the Drums Along the Rockies with Ascend Performing Arts is Colorado’s one of the country’s premier marching music events.

On July 15, drum corps groups gathered and performed their marching routines as a competition, not only based on musical talent but also on the entertainment of the performance. The first four weeks of the summer are spent training, and then the groups perform across the country.

This year, multiple Colorado State students are performing with multiple drum corps groups. These talented students with a passion of the performance of marching are participating in the groups the ‘Troopers’ from Casper, the ‘Blue Knights’ from Denver, the ‘Cascades’, from Seattle and the ‘Battalion’ from Salt Lake City. Each drum corps group provides a different experience in the performing arts of marching, but all provide a summer family for these CSU students.

Performing in the front ensemble, Malia Odekirk is a junior at CSU, and she has been a part of CSU’s marching band for two years. She has played the piano since she was four and played percussion throughout middle school and high school. She is a music major with a double concentration in percussion performance and music education.

“My current marching experience has been incredible and undoubtedly life changing,” Odekirk said. “The relationships we build and the high level of improvement in musicality and technical ability is unparalleled, and I am very thankful to be here.”

Odekirk said her experience with the drum corp and Colorado State University has been life changing.

“I am very appreciative for the incredible opportunities I have had thus far at the school,” Odekirk said. “I am currently marching a season with the Troopers, and the corps is an incredible group that is deeply rooted in history, camaraderie and dedication. Beyond this corps, DCI itself is an extraordinary activity that brings people from all walks of life together to work harder than they ever have, test the limits of the human physical and mental state and cultivate remarkable relationships that have the potential to last a lifetime.”

Richie Dow is a second-year student majoring in apparel and merchandising. He has been performing snare for his past two years at Colorado State, and he will be a section leader in the fall. Dow is also a veteran of the Blue Knights Percussion Ensemble and is on tour with the Seattle Cascades Drum and Bugle Corps. His experience with the Seattle Cascades has been worthwhile yet difficult, as the art of performance goes, he said.\

“My experience has been satisfying,” Dow said. “There are lots of ups and downs during the season, but when I look at how far I’ve come it really makes it all worth it.”

Sydney Brown is an incoming Colorado State student who will be majoring in music. She’s played the trumpet for eight years, and this is her third year with the Blue Knights Drums and Bugle Corps.

“My experience with drum corps has been very positive,” Brown said. “It is a great feeling to work so hard for an end product. Performing in front of crowds all summer never gets old, and it makes me excited to hear and see the reactions from the audiences. Drum corps have taught me how to work hard, and they have shaped me into the person I am today.”

Anthony Lederhos is a athletic band support specialist at Colorado State University and is coaching The Battalion Drum and Bugle Corps for this year’s Drums Along the Rockies competition. Lederhos studied percussion performance and graduated from Colorado State in 2015. This is his first time teaching a group at the drum corps competition. Lederhos has been involved in the marching arts for 10 years.

“I was a member of the Blue Knights Drum and Bugle Corps in 2015, and it was an experience I will forever cherish,” Lederhos said. “It taught me how to truly commit to one’s craft and that you will only get the most out of an experience if you are willing to do your absolute best work.”

Lederhos said he has appreciated the people he has worked with over the years with the Blue Knights.

Reccently playing a memorable show at Sports Authority Field in Denver, Lederhos said, “I do not know of many other activities that hosts such a passionate and hard- working group of people.

Collegian Reporter Julia Trowbridge can be reached at entertainment@collegian.com or on twitter @chapin_jules.