Happy and healthy: 83-year-old man walks 16 miles for his birthday 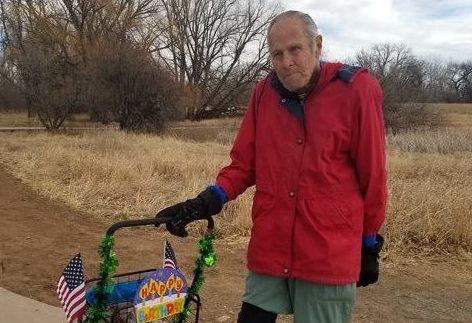 Brown sets off on his 16 mile walk for his 83rd birthday. (Collegian | Alaysha Powell)

Fort Collins resident Don Brown stepped out into the cool, crisp air Saturday morning to begin a 16 mile walk. This long walk was in celebration of his long, healthy life. He turned 83 that same day.

Brown brought a carrier cart to hold everything that he might have needed during his walk. He decorated the cart with American flags, a poster of Texas, a picture of sea shells, magazine clippings and a picture of his idol Jack LaLanne, “The Godfather of Modern Fitness,” on the very front.

Inspired by LaLanne, Brown said he began working out at the age of 15.

Brown’s favorite forms of exercise are cycling and walking, but Brown said he didn’t learn how to ride a bike until he was 15.

“I got to age 15 and my folks couldn’t afford a bike or anything,” Brown said. “Suddenly my dad got a real good job, so they bought me a brand new Schwinn and a guy in my neighborhood taught me how to ride.”

Brown said he created motivation to stick with his newfound love for exercise. He worked several jobs that demanded hard labor, including working as a bicycle carrier and freight handler.

When Brown became an adult, he served in the army. During his free passes, Brown said he would bike miles and miles through the nearby towns in Germany where he was stationed. When Brown came back to America he competed in various tours and races where he made several friends.

“You’re out there with some people who are really great and that’s so much fun,” Brown said.

One of Brown’s most notable accomplishments is completing the Pikes Peak Marathon three times all at the age of 60. Brown said that while he did not always win a first place ribbon or trophy, he did not care; he just enjoyed exercising in the company of his friends.

Brown said he had to give up cycling as he got older due to problems with his balance. However, that does not stop him from walking and inspiring his many friends.

“We’ve biked many miles together,” said Dave Thoms, a close friend of Brown. “He just gave up bicycling within the last year because of his equilibrium. Don is an exceptional athlete and I think that is what caused us to become friends so fast. I’m all for it. I think it’s great.”

During his free time Brown said he regularly goes on long walks to maintain his healthy lifestyle. With he momentum of his 16 mile birthday walk, Brown said he plans to participate in the Colorado Half Marathon in May.