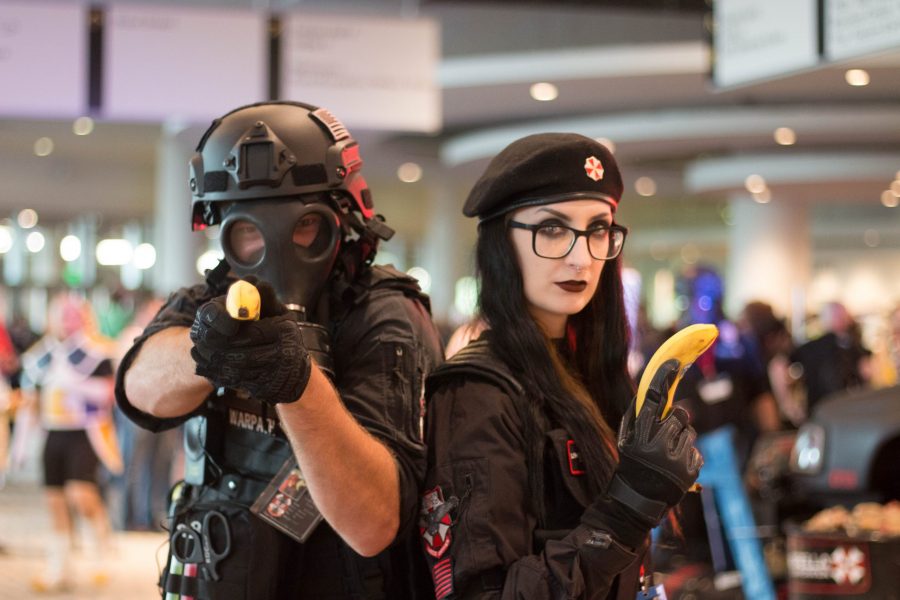 The streets of Denver were lined with costumed fans this Friday, although Halloween is still three months away.

This weekend is the sixth annual Denver Comic Con, run by Pop Culture Classroom. The convention invites fans of all things movies, shows, video games and of course, comics, to the Denver Convention Center for a three-day pop culture extravaganza. Attendees can attend panels, shop for nerdy merchandise and have their photo taken with their favorite celebrity guest.

The convention has grown every year, with attendance jumping from 27,700 in 2012 to 114,900 last year. This year is expected to follow that trend, as lines wrapped around the building before the doors opened. Once the early arrivals were allowed into the building, they lined up to go upstairs to the show floor. However, some took the time to see some groups downstairs, such as the Umbrella Corp Denver.

The group is a Resident Evil cosplay organization that supports the local community and veterans by providing costumed appearances at events and raising money for charity. The group had many costumed members, as well as a costumed vehicle, and spent time posing for photos with guests. Umbrella Corp Denver is one of the many groups that pop culture fans can get involved with who were advertising at the Con.

Once allowed upstairs, attendees flocked to check out the hundreds of vendors, artists and authors filling the main area of the convention. Many of the merchants sell clothing, toys and other items related to the many interests that the Con caters to. Although many are online vendors, many brick and mortar comic book stores have booths as well, including Gryphon Comics.

“I think it’s a good time for everybody to come and see everything,” said Liana Sanders, the store’s owner. “It’s nice to see people out in the world instead of just in our store.”

Gryphon is well known to the pop culture fans of Fort Collins, being one of the City’s best shops for comics, games and other items. The shop’s booth was just one of many of its type, and costumed attendees walked through, browsing wares.

Cosplay is always a huge part of the convention scene, and Denver Comic Con is no exception. Costumed characters from every show, movie and comic imaginable walked the halls of the con. There are the usual Deadpools, Doctor Whos and Harley Quinns, although every year has some costumes that are a bit more popular. This year, some of the new, exciting costumes included Team Skull Grunts from “Pokemon Sun and Moon,” characters from the game “Overwatch” and one frightfully impressive Demogorgon from “Stranger Things.” The cosplayers gathered and posed for themed photoshoots, and many of them were stopped throughout the day to be complimented on their work.

Many con-goers choose not to dress up and simply want to enjoy the convention without being stopped for a photo. Zach Adrians is one such attendee, who took a break from the show floor of the convention to enjoy Breckenridge Brewing’s beer made for the Con, “I am Brewt.”

“It’s good,” said Adrians, who graduated from CSU with a degree in Speech and Communication in 2011. “It’s a little heavy, but it’s good.”

Adriens also said that he was excited for the panels over the weekend, and loved the artists he had seen.

Although the merchants are a wonderful part of Denver Comic Con, an ever more popular part of the event is the over 400 hours of panels, events, screenings and workshops. Panel discussions range from improving Lego creations and the science of “Star Wars” to using pop culture to help teach in the classroom. Many of the special celebrity guests also had their own panels, including voice actor Dee Bradley Baker, musician “Weird Al” Yankovic and two of the young actors from “Stranger Things.”

During his panel, Dee Bradley Baker talked about growing up in the town of Greeley and finding his passion for voice acting. Baker is known for playing an impressive collection of cartoon characters such as Daffy Duck and the Clones from “Star Wars: The Clone Wars” as well as many creatures from series such as the “Halo” franchise and “Avatar, the Last Airbender.” Baker calls his work with “Avatar” and “The Clones Wars” his favorite that he’s done.

Many of the other guests hosted Q&A sessions where they answered questions from fans, many of which related to pop culture. “Weird Al” admitted to being a huge Star Wars fan and talked about his inspiration when creating his parodies. Caleb McLaughlin and Gaten Matarazzo from the hit Netflix series “Stranger Things” also talked “Star Wars,” although McLaughlin got a collective gasp from the crowd when he admitted that he had never seen the franchise. The two talked about how their lives had changed since the show released last year. although they were sadly not allowed to talk about season two.

One of the biggest panels of day one featured James and Oliver Phelps, who played the Weasley Twins in the “Harry Potter” franchise. The twins talked about auditioning for the series with no prior experience, and admitted that they had never been to Denver before and so spent the day before wandering the city. Many of their answers to questions included a bit of Fred and George’s trademark humor, including a question about the twins playing each other’s character on set, to which James replied: “well, I played Hagrid once.”

The day concluded with the opening ceremonies, hosted by Ken Reid of the TV Guidance Counselor Podcast. After parties were hosted around the city as attendees headed back to their homes and hotels to prepare for the rest of a full weekend of pop culture.