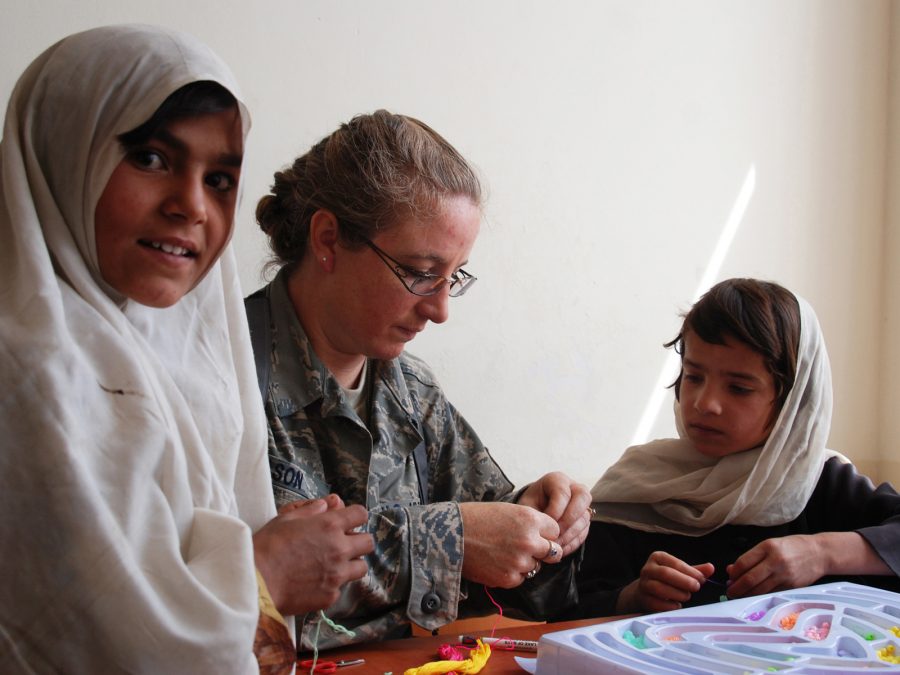 The United States is largely a country that is unaware of many of the difficulties women around the world face in seeking education in the hope of bettering their lives. Figures like Malala Yousazfai have inspired countless numbers of people. In the case of Yousazfai, by telling her personal story of bravery and defiance after experiencing first hand violence in pursuing an education in Pakistan.

While Yousazfai has continued her fight for women’s right to education in Pakistan and the Middle East, “What Tomorrow Brings” is a touching film on a school in a remote village of Afghanistan that shares Yousazfai’s sentiments. Our subject here is the honorable Razia Jan, a woman who is responsible for the creation of Zubali Education Center, an all girls private school.

Opened in 2008, the school is attended by over 600 students and the bright red door of the facility serves as a promise that children deserve and will, in fact, have a better future. The center is home to a population of progressive female teachers that have historically inspired students in and outside the classroom.

Directed by Beth Murphy, “What Tomorrow Brings” was filmed between 2009 and 2015 and chronicles the lives Jan and her teachers have touched throughout the school’s existence. Jan herself is a no nonsense kind of person and, as an audience, we see how she deals with the demands of the men within her community.

Multiple times in the film, we see Jan berate the Mujahideen men in the village into making sure the school is protected at all costs. Jan comes across as fearless, especially when it has been taboo for women to look men in the eye when they are speaking to them. In the film, Jan even reflects on some threats she and the school have received to which she told these men that she will bury them in response. In many ways, Jan is incredibly brave.

“People often ask me if I am scared of what I do,” Jan said. “If I am scared, then my life is not worth the value.”

Despite Jan’s ferocity, she is a champion of compassion for her students. The film does a great job of showing the ways in which Jan and the teachers of the school approach the lives of the students they are responsible for. We see how this plays out in the lives of two young women named Pashtana and Rihala who are both have immense hopes for graduating school.

In the film, we see how these two women are pressured from the men in their families to not go to school and instead marry older men. After Rihala has been absent from school, a teacher named Nazima comes to her father’s home and tells the man his actions are preventing his daughter from pursuing a better life for herself. The entire segment is beautiful as we see Rihala’s father open up to Nazima’s words and consider what will truly be better for his daughter. Rihala returns to school near the end of the film and eventually went on to graduate as well.

The film is largely uplifting but shows the harsh realities that go into making sure a school like this is able to provide for its students. There is always a chance that the school’s water could be poisoned by saboteurs in order to shut it down, so every morning a teacher tests the water on herself to make sure it is not poisonous to the girls and women. The woman’s belief is that she is just one person and that there is too much at stake to risk it.

Despite the odds, the school gives so much to its students and the film captures the importance education and compassion have on the lives of these young women. Jan’s school offers women a different life from the one that is often prescribed by the men in their communities. It is a film that provides a profound sense of hope and it is no secret why Razia Jan’s non-profit organization is called Razia Jan’s Ray of Hope.

“Education is so important. No matter where you are, there is hope to educate people and make their lives better,” Jan said.

“What Tomorrow Brings” is a necessary film in the the mission to expand educational opportunities to everyone and one that should be viewed by everyone when it comes to the power of compassion.

James Wyatt can be reached at entertainment@collegian.com or Twitter @jaames2295