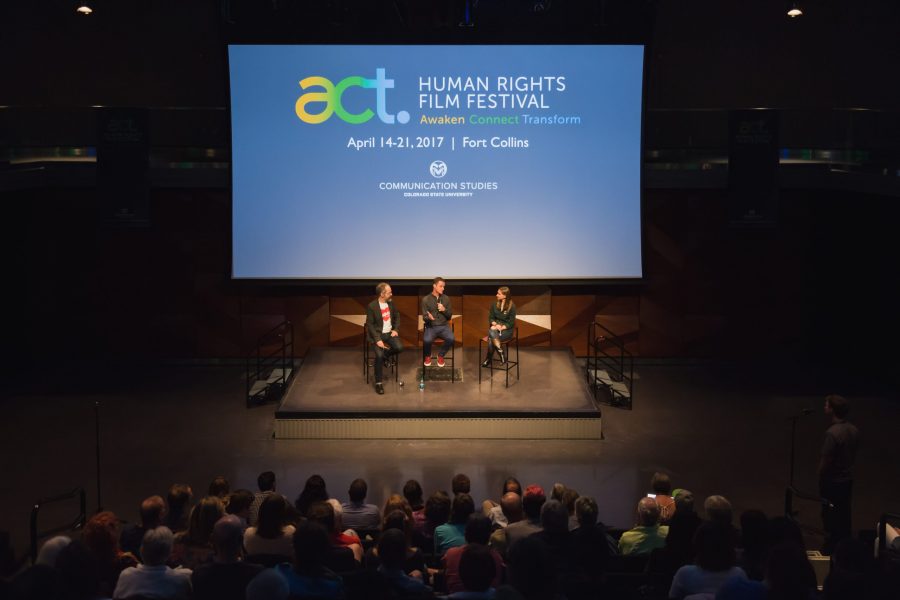 Conor Horgan and Rory O'Neill field questions after the showing of their documentary 'The Queen of Ireland' during the ACT Human Rights Film Festival. (Davis Bonner | Collegian)

What exactly is a human rights film festival? It is a question that can be answered a lot of different ways, but Colorado State University’s ACT Human Rights Film Festival brings a simple message to the viewer through an array of films. ACT stands for “Awaken, Connect and Transform” and the myriad films present at the festival all aim to convey that message to the audience.

Tommy Clarkin, a volunteer for the festival and a student at CSU, believes that films like the ones shown at ACT allow people to broaden the scope of their knowledge on issues that are going on in the world.

“This film festival is a great way for Fort Collins to get introduced to human rights around the world,” Clarkin said. “These films introduce us to stories that you don’t get to see every day.”

A film that did this for Clarkin was “What Tomorrow Brings,” a movie about an all-girl school in a remote village in Afghanistan. The school was created by activist Razia Jan and the film chronicles the day-to-day lives of the women who work so hard to assure the younger generation of women in Afghanistan a better life through education.

“Before that movie, I had no idea about that school or what those girls were going through and it opened my eyes,” Clarkin said. “It’s a film that really broadens human rights than we are used to experiencing.

Jan herself attended a screening of “What Tomorrow Brings” during the festival. She said she found an immense value in having a festival dedicated to human rights.

“I think it is so important for the world to truly see what human rights are and it’s such an asset for us to promote these rights,” Jan said. “There almost couldn’t be a better way than at a human rights film festival.”

Rory O’Neil, subject of the film “Queen of Ireland,” was also present during the festival.

“The context certainly gives it more gravitas,” O’Neil said. “I also think it gives it a particular focus for what the audience can hopefully take away from it.”

In the context of human rights, “Queen of Ireland” is an important film in the representation of the LGBTQ+ community and the victory found within the film is one that sends a strong message of hope to the rest of the world. It was this kind of message that director Connor Horgan hoped had reached the audience who viewed it, he said.

“This is the first dedicated human rights film festival the movie has ever been shown at and I hope the film and the festival have both been able to make a difference,” Horgan said.

It is the perspectives and messages that the films and their creators present at the film festival that make its existence such a privilege to CSU’s campus, said C.J. Johnson, a student at CSU. The festival provides a real opportunity for Colorado to engage in human rights discussions with the rest of the world, he said.

“People bring these films here with different views and with different things going on in the world and that’s very important,” Johnson said. “It’s good so we don’t stay so single-minded and can come together as people.”

James Wyatt can be reached at entertainment@collegian.com or Twitter @jaames2295.