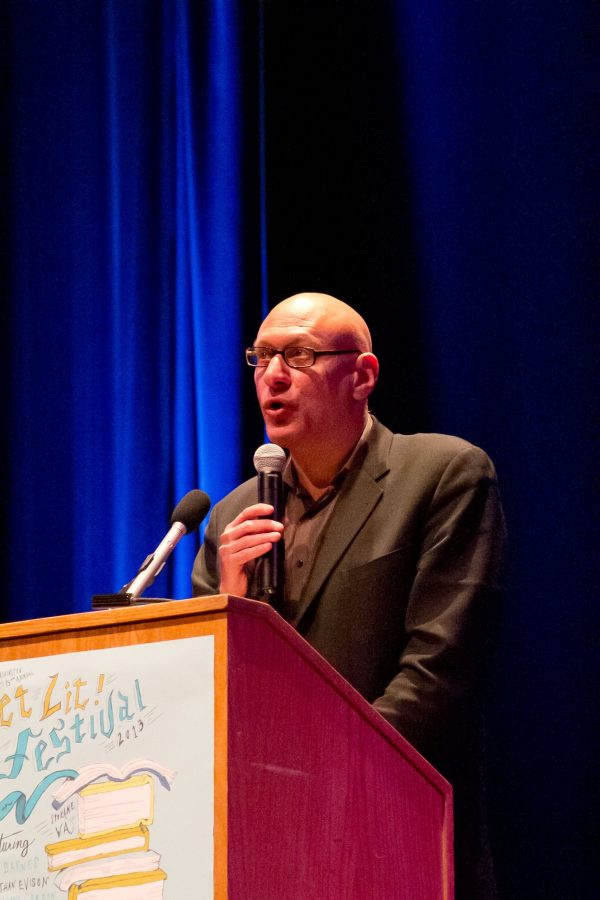 International best-selling author David Shields said his co-star and former student Caleb Powell have become close through adapting their book “I Think You’re Totally Wrong: A Quarrel” into a film with the directorial aid of James Franco.

The film pits Shields and his former student Powell, who is in his 40s at the time of the filming, against one another in an exchange of words and of wit in the traditional styling of the dialogue found in film and literature.

Despite the film’s setup and the rigidity of the genre, there was plenty of laughter coming from the audience sitting in a lecture hall in the Behavioral Sciences Building on Colorado State University’s campus; some of the snappier dialogue between the two men proves to be more humorous on average than traditional examples of the dialogue format tend to be.

However, there is still plenty of serious philosophizing and debating that the genre is known for.

“This maybe is a chance for you to reanimate your art and for me to reanimate my life,” Shields says early in the film to Powell.

The two writers engage in a dialogue over four days spent in a mountain cabin, which at times is not quite civil. Occasionally Franco himself becomes involved in the dialogue and is featured in several scenes in discussion with the two men.

“Franco was very laissez-faire as a director, but when he saw Caleb and me fall into some interesting trouble he pounced, as a good director should,” Shields said.

The film not only serves as a dialogue of two opposing viewpoints from two different writers, it reveals a good deal about each writer in turn. At first the film was supposed to recreate the dialogue contained in the book.

The two writers’ script-writing retreat became the premise for the film adaptation.

“The last thing one wants to do is to remain dutifully loyal to the book,” Shields said. “I wanted the film to feel different. During the filming it felt very different and the final result feels very different.”

After screening the film Shields took the front of the lecture hall and fielded audience questions.

“I think I have created a monster and it is a compliment in a weird sort of way,” Shields said in response to an audience member’s question. “I would like to shape this monster and present it in a meaningful way.”

Collegian reporter Samuel Perrine can be reached online at entertainment@collegian.com or on Twitter @brickzor.