“Resident Evil” franchise crawls back from the grave with new installment 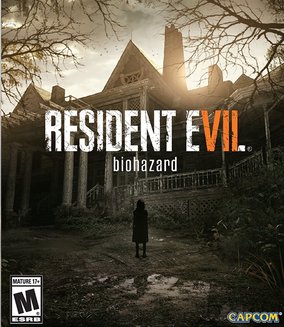 However, many fans were displeased to see that the gameplay for “Resident Evil 6” mimicked the third-person shooter “Gears of War.” To critical chagrin, the plot featured globetrotting action-adventure. It discarded the franchise’s trademark cramped and claustrophobic survival horror. This led executive producer Jun Takeuchi to declare that the next “Resident Evil” installment should revisit its roots.

Capcom’s soul-searching paid off in the “Resident Evil 7,” released for Playstation 4, Xbox One and Windows.

The game is set in a Louisiana bayou but feels as if the player is stuck in a Japanese horror film. Players inhabit the body of Ethan Winters, a first-person protagonist who has come to the swamps in search of his missing wife. The game begins with a trek through eerily silent woodland. Players will have difficulty suppressing a grin when they first lay eyes on Ethan’s destination: a looming, dilapidated house. This is but one of many assurance that the franchise has recaptured its survival-horror elements, while adding something new.

Once inside the house, the game relies on creaking floorboards, faint rainfall, muffled sobbing, swirling shadows, disembodied whispers, jump-scares and other atmospheric elements to generate suspense. The game’s goal is to make the player feel helpless and constantly at the mercy of unseen, insidious forces, a goal it overwhelmingly accomplishes.

Fans who have yet to pick up the title may wonder about “Resident Evil’s” famed bad voice-acting. Realistic voices and raw screams that chill players to the core replace the franchise’s usual stilted voice inflections and campy dialogue. Players will not encounter any “Jill Sandwiches” here.

The game can be beaten in nine to ten hours, but long segments of time pass between enemy encounters. In one scene, the player guides Ethan around a corner only to be faced with his possessed wife, Mia. In a clear indication that marriage counseling might not be such a bad idea, she slices through Ethan’s wrist with a chainsaw while spewing obscenities at him. For the full arm-severing experience, a virtual reality helmet is available for the game’s PS4 version.

“Resident Evil 7” may represent hope for survival horror, but it has some problems. This game does a marvelous job of putting you in the protagonist’s shoes and of never allowing you to feel safe. The illusion of danger is sadly shattered at times. When expressionless, the villainous Baker family’s faces approach the jaw-dropping realism of a game like Until Dawn. When talking, character’s mouth movements are comically chomping and muppet-like. In addition to reminding the player of Kermit the Frog, this animation quirk is an unwelcome injection of absurdity into an otherwise serious game.

The game lacks variety among enemy characters. Aside from the Baker family, the murderous occupants of the mansion, most enemies are “The Molded.” These look like tar in human form, with giant teeth, eyeless heads and claws. While encountering them in a pitch black, water-filled catacomb is hair-raising, the novelty wears off once the player realizes that the game’s enemy designs simply do not offer much variety. It also does not offer zombies, at least not in terms of ravenous, walking corpses. The closest the player sees to zombies are the Bakers, who are scheming, devilishly intelligent enemies and far from a mindless horde.

Boss battles with the mutated Bakers can be repetitive, with no indication as to how much health these immortal characters have left. For the first five minutes, these fights are terrifying, pitting a frighteningly outclassed Ethan against characters who can regrow their own heads. After minute twenty or so, the boss fights become a protracted endurance trial, leaving the player to wonder if they have inflicted any damage at all.

While the game’s suspense element is pure Japanese horror, reminiscent of “The Ring” and “The Grudge” movies, key scenes unfold like a greatest hits of Hollywood horror. Allusions to “Texas Chainsaw Massacre” surface when your character is drugged, propped up at the Bakers’ dinner table and force-fed unidentifiable slop while the family yowls at one another.

The psychopathic Bakers and their sadistic antics echo a similar family from the film “House of 1,000 Corpses.” One of the game’s sections, clearly inspired by the “Saw” films, features Ethan confined to a trap-filled room, where his only hope of escape rests in a breadcrumb trail of cryptic clues that the Bakers’ son has left behind. Ethan’s long-haired wife, Mia, mirrors the torn yellow-green skin and guttural scream of Mia from 2013’s “Evil Dead” film.

Should you play it? Yes

Classic franchise characters like Wesker, Jill Valentine and Leon Kennedy are nowhere to be found during the gameplay. Aside from the audio-visual suspense, this is one of the game’s greatest strengths. It gives no indication as to where these events fit in the “Resident Evil” timeline. The game saved “Resident Evil” because it looks and feels nothing like previous installments. It is a refreshing take on Capcom’s survival horror tradition.