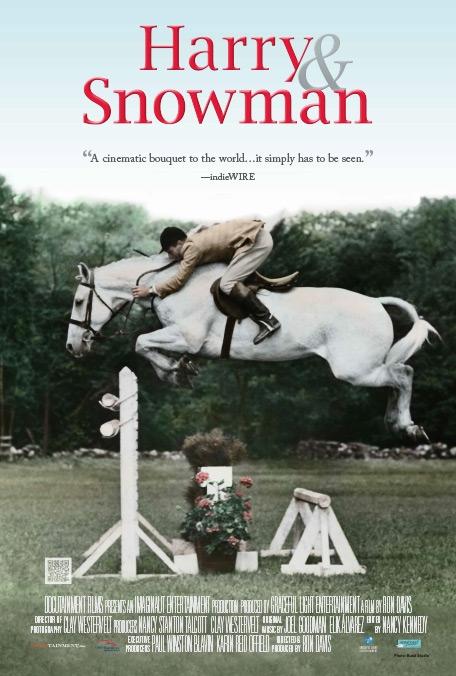 We all have that faint memory of struggling to stay awake while our grade school teachers showed a boring film on an animal migration during science. These types of films were called documentaries, and while the poorly created ones may have turned you off from the entire genre completely, “Harry and Snowman” will surly change that.

“Harry and Snowman,” directed by Ron Davis, is a film about the relationship between a man and his horse and the incredible journey that they shared together. Harry de Layer is a Dutch immigrant who came from Holland. He immigrated to Long Island, New York, after the end of World War II where he was offered a job as a riding instructor for Knox School. I never even heard of this school before seeing this film, so for those of you who are curious, this is a pretty prestigious institution. It was during his time here that de Layer stumbled across an Amish plow horse that was getting ready to be sent to the glue factory. It was in that moment that de Layer chose to rescue the horse and name him Snowman. Snowman and de Layer became an inseparable team and launched a legendary career together.

I can honestly say that I am not the biggest fan of documentaries, especially when the only thing I knew about the plot was that it was about some guy and his horse, but I am glad I gave this film a shot. I am a huge animal-lover, and I am not ashamed to admit that I cry my eyes out during anything dealing with them being rescued. I have always kept rescue animals instead of going to a store or breeder, and I do feel that it creates such a strong bond. Any of my fellow animal-lovers will understand and love this film.

Davis does a good job capturing this emotional bond. Davis made de Layer truly seems like he and his family have touched the lives of several people despite his flaws. During the war, he helped hide Jewish people from being persecuted. However, he had his own issues as well.

One of the things I did not like about de Layer’s story was his children’s interviews. His daughter, Harriet, recounts her father’s dedication to his work. While this can be an admirable quality, she explains that sometimes the kids went without so that their father could have. This honestly broke my heart because it must have been difficult for his family to deal with, but I do applaud Davis for including small details like this to show that de Layer isn’t a super hero but a human.

The footage shown was really interesting. Since Harry and Snowman rose to their fame in the 1950s, the footage is a mixture of old school film mixed with modern interviews. It is really cool to be able to put faces to names and really understand the entire story. One may not think that a lot can happen by rescuing an animal, but de Layer and Snowman shows that a person’s entire world can change.

Should you watch this movie? Yes

Anyone can see this film, but if you are interested in the 1950s, animals or documentaries, then this film will probably be all that more interesting. Every good story seems to have an underdog, and this film is no exception. It is a story about love, passion and pain. There are plenty of happy moments, but those moments are met with bumps in the road. The wondrous attitude that de Layer has on how to approach life is captivating throughout the entire film, and it will truly inspire you to put your entire heart into everything that you do in life.