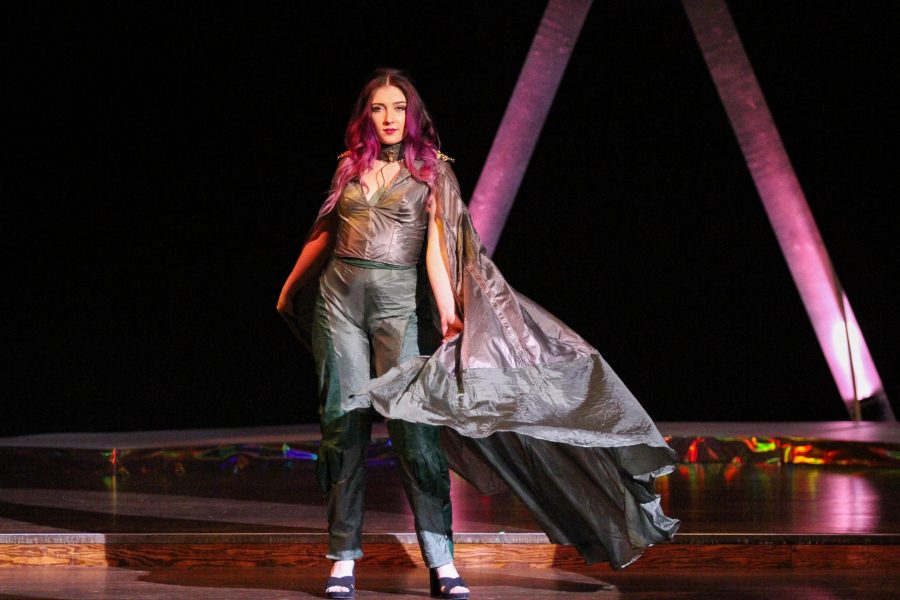 Emily VIttorio models an outfit designed by the junior draping class. The outfits in the collection were all made with repurposed military textiles. (Ashley Potts | Collegian)

The Fashion Department stepped out to center stage with this year’s vibrant and dazzling fashion show, “Spectrum.”

The passion, talent and charisma of the design students was showcased Friday at the Lincoln Center. The show featured 24 different collections from senior design students ranging from urban to children’s wear as well as a collection of donated parachutes turned couture created by students in the junior draping class.

Each year, the fashion show title is selected by the students who put on the show last year. Karalyn Jones, an apparel and merchandising major and one of the directors for this year’s show, was in the class that selected the name last year. Jones thinks the name not only embraced the variety of colors and textures but the spectrum of styles amidst the senior class.

“We decided on Spectrum just because there’s a whole spectrum of colors and just a wide variety of talent and aesthetics and creativity,” Jones said. “So we just thought that spectrum was a good name to encompass all that.”

Not only was the name represented in the clothes on stage but by the lighting and stage design as well. With each new collection, a new mood was set on stage with lighting and sound. The music was always upbeat, and it was hard not to stand up in the crowd and start dancing as the models walked to center stage.

Skylar Richardson, a senior journalism and media communication major, was another director of the show.

“Spectrum speaks to the diversity of not only the show but of the models, the garments, the stage and the potential that the show holds,” Richardson said.

The show was completely sold out. The audience was also not afraid to showcase their enthusiasm for the designers and models.

DeAnza Banuelos, a theatre performance major, modeled three different collections during the show.  Although Banuelos has had other modeling experience, “Spectrum” was her first CSU fashion show.

“The people in fashion show have been so welcoming and warm,” Banuelos said backstage during intermission. “And the audience was clapping the whole time out there which is wonderful because you never know what they will do.”

For other models like Caroline Foster, a junior business management major, the show was a completely new experience.

“It is going really well,” Foster said after the first half of the show. “The walking isn’t bad but some of the outfits are pretty scandalous like the bathing suit so that made me a little nervous.”

Despite this, all the models walked with a smooth and confident air, and there were no wardrobe malfunctions during the entire show.

The show was supplemented with a small performance by a local acapella group called, “Bassic” who performed two songs after intermission.

After the show the collections were judged by guest judges; Tiana Nelson, a CSU alumna; Brian Guiducci,

another CSU alum who has worked for top name brands such as Vogue and Allure; Anabella Poletti, a CSU alumna and a designer here in Fort Collins and Heather Okimoto, the editor of Denver Style Magazine.

The award for outstanding designer went to senior apparel and merchandising major, Nicole Pink. Her designs were largely inspired by the architecture in Paris. Pink studied abroad there last summer and wove that experience into her designs.

“(The French) have certain rules in terms of keeping historical architecture protected, so they still have hundreds and hundreds of years old buildings right next to really new ones,” Pink said. “I loved seeing the juxtaposition between that and how the historical ones have a very art nouveau and organic kind of shape and kind of decorated style to them while the modern ones are very geometric.”

Pink said she tried to include that in her pieces.

“I tried to use some very structural shapes and some very sharp edges and combine them with very soft and flowing edges,” Pink said. “I used delicate details such as lace and tool and things to kind of create that juxtaposition within the design itself and the collection itself.”

“Spectrum speaks to the diversity of not only the show but of the models, the garments, the stage and the potential that the show holds,” -Skylar Richardson, senior journalism and media communications major

gowns and other women’s wear. Pink is another design student on the long list of CSU grads who is really working her way up in the world of fashion.

“It has been absolutely fantastic,” Pink said.  “It has been a dream job to be out there, and I feel right at home.”

The show was a testament to the hard work and dedication of the design students here at CSU.

“I think a huge thing is that the whole thing is put on by a class and it’s not a class like out a textbook, you’re dealing with real money and real people,” Jones said. “And it’s all student run and that alone is really cool to see.”