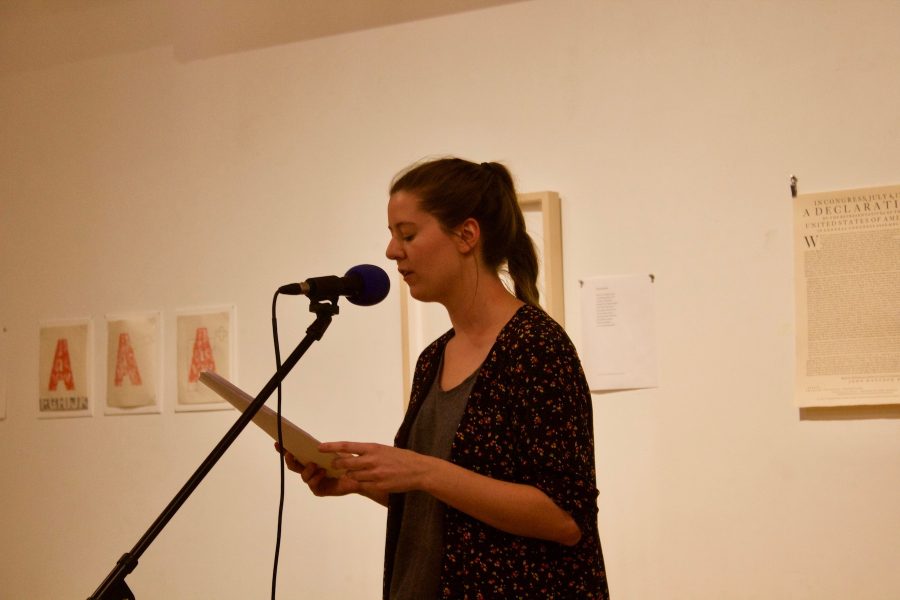 Emily Harnden, a third year fiction MFA student at CSU, reads her piece at the season finale of the ForkSocket reading series. ForkSocket is a literary reading series with a touch of absurdism humor put on by CSU MFA students, which is held at Wolverine Farm Letterpress and Publick House. {Abby Flitton | Collegian}

The night started with a comical murder-mystery skit, in which Konopka and Cotten-Potter took part.

Cotten-Potter summarized the skit as being about “bad boys when they come for you.”

The skit was replete with witty and crude repartee.

“How did you lose your virginity?” Cotten-Potter, playing a policeman, asked a suspect. Suffice it to say, it involved an empty house and a “dishwasher with curves.”

The skit was followed by the night’s two readers.

Words can make a difference. They can touch our lives.”-Michelle Thomas, first-year Master of Fine Arts student, fiction

Emily Harnden, a third-year Master of Fine Arts candidate in fiction, read a creative nonfiction essay she’d written about her twin sister’s battle with cancer. Titled “9:47,” the essay was a winner of the Association of Writers and Writing Program’s Intro Awards. The essay was full of lines such as “I think often of how those four minutes have defined us.”

Harnden was followed by poet Abby Chabitnoy, a 2016 graduate of the Master of Fine Arts program. Chabitnoy, whose work has been featured in such literary journals as Tin House, read poetry. This included selections from her impending book, “How To Dress A Fish.” Chabitnoy’s poetry touched on a plethora of subjects. Subject matter included Native American tribal identities, violence against women on reservations, Chabitnoy’s roots in Alaska, as well as her great-grandfather, who was sent to the Carlisle Indian School.

Following the reading, attendees said they enjoyed the combination of reading and humor.

“I thought it was magical and hilarious as always,” said Michelle Thomas, a first-year Master of Fine Arts student in fiction. Thomas said she loved participants’ willingness to “take on different characters and personas and invent different torture methods.”

Thomas said she was sad that this was the last reading under Konopka and Cotten-Potter’s direction. Konopka, a poet, and Cotten-Potter, a fiction writer, are graduating this semester, but the reading series will continue under new hands. The series is currently in its third year.

“It gives the reading atmosphere so people can feel comfortable sharing their work,” Thomas said.

Thomas said the readings themselves were full of pathos.

Kelly Weber, a second year poet in the Masters of Fine Arts program, also said the reading had emotional impact.

“It opened up so much possibility seeing what art can do,” Weber said.

“I love absurdist humor,” Weber said, “which keeps writing from getting too serious and makes it more serious.”

Megan Clark, a second-year Master of Fine Arts student in fiction, also said the ambience was a plus.

“It is a relaxed way for students to come and see a reading,” Clark said.

Clark said as a fiction writer she appreciated the opportunity to hear people read from different genres.

Where: Gregory Allicar Museum of Art, University Center for the Arts

So what broader purpose did the reading hold for Colorado State and the Fort Collins community? Weber said the venue opened up readings to a wider audience as well as “representing a broad variety of writers past and present” from CSU.

“Making art accessible is good for everyone,” Clark said.

Thomas said art itself has a strong emotional resonance.

“Words can make a difference,” Thomas said. “They can touch our lives.”