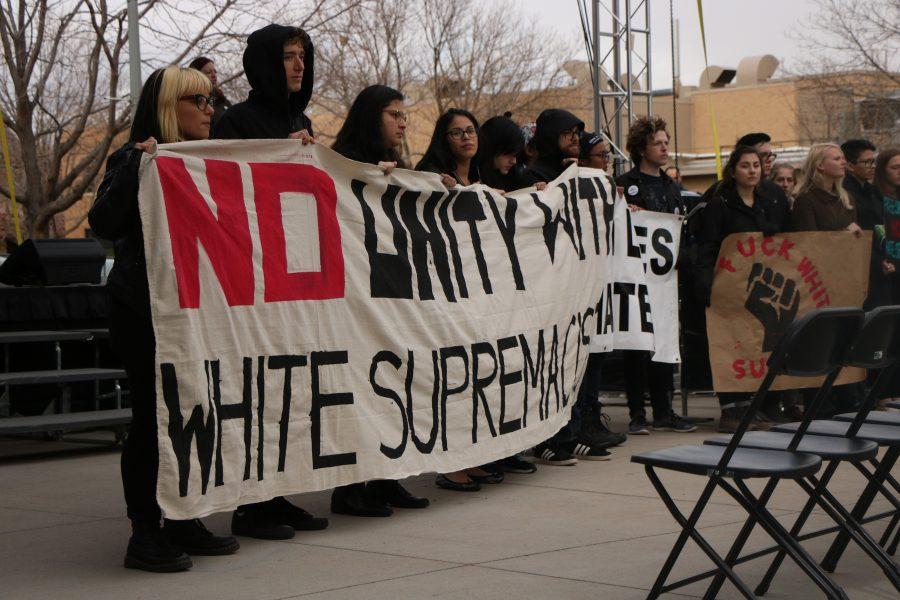 Ok, I can hear you yelling, “I’M NOT A WHITE A SUPREMACIST,” but let us contextualize this.

White supremacy still permeates many facets of our modern lives: the Pitkin Street that we walk and drive on daily is named after a governor who suppressed uprisings of Native Americans, our school is a land-grant institution, meaning we are learning on land the government stole from indigenous peoples and we purchase and read textbooks that are predominantly written by white men.

Just because we as white people cannot identify supremacy because it isn’t manifested in the exact same ways as our past does not mean it does not continue to resonate in our reality; we just have the privilege of not experiencing the negative repercussions of its continued existence. While not all of us are being flat out nazis by distributing flyers around campus that support eugenics and preaching that “it’s OK to be white,” we white people still embody our history of violent colonialism and racism. We are products of historical white supremacy that has not been completely eradicated, and the only way to reach this cultural idealism is to continue to critically think about how we show up in our community and the world around us.

“I’m not a white supremacist,” has been a prominent sentence on campus lately in light of overt displays of racism that white students have been able to recognize. But, perhaps, if we spent less time saying “I’m not a white supremacist” and more time listening to voices on campus calling us out, not passively claiming to believe in equality rather than making continuous, hard efforts towards justice, then perhaps we would better embody the “unified” label that the university is desperately trying to associate with our community, and minoritized groups would actually feel safe on our campus. If white people are not constantly open to feedback about how we are oppressing those around us, that is white supremacy. And with that, here are eight other ways we white students are enacting white supremacy on campus without even knowing it:

Reading an article in the collegian about white supremacy written by the whitest white woman
You could read this list, or instead you could start listening to the people of color who have been calling out this very injustice within the CSU and Fort Collins community for years. We should do better.

Larimer county is among the least racially diverse in Colorado

Taking up space and not moving out of the way
We must pay more attention to how much space we take up in the classroom or on campus compared our peers and if we are taking actual physical space away from students of color. Are we the only ones talking in the classroom? Are we talking over people of color in conversations with them? Are we cutting in front people of color to get to doors first, or not moving out of their way in the plaza? You may not even realize you are doing it, but our white supremacy shows up in our entitlement to spaces.

Thinking the hate crimes on campus are “unbelievable”
The people who experience hate everyday on our campus are not surprised. When we are still describing Greeley and Aurora as “ghetto” and “scary” places to avoid, calling Black Panthers a hate group equal to the KKK, telling DACA students that their parents should have underwent the legal proceedings of becoming citizens if they wanted a right to education, singing the ‘n’ word at parties and argue that “it’s just lyrics,” and have no idea that there are diversity offices on campus, among so many other racist actions we enact daily as college students attending Colorado State University, they will continue to not be surprised.

Prioritizing parking as a big issues on campus over hate crimes
Yes, parking is an issue on campus, and the prices create unequal opportunity to certain types of transportation for students. But, I would argue that a threatening noose on campus that no one has experienced repercussions from falls under a different realm of urgency, as one threatens the livelihood of students. Both issues can be fought simultaneously, but this ASCSU election season, “bias-related incidents” should be a priority in voting decisions.

Claiming “minority” status
Some beliefs may be less expressed on campus because upon sharing them, there is backlash. Instead of claiming minority status and demanding “equality for all beliefs,” people who truly seek to fight white supremacy would listen to why certain beliefs are getting backlash. Some ideological systems suppress and threaten the lives of actual minority groups of campus who are marginalized everyday, and criticizing those beliefs is not excluding them from diversity, but a begging request for those who demand “equality” to realize the belief systems that they publicize are exactly what tears diversity down.

Expecting people to “unify” instead of actually addressing issues
Holding hands with a nazi does not make them less of a nazi. No one has to forgive their oppressor because it looks good on paper. “Believing” in equality is one thing; working towards it is another.