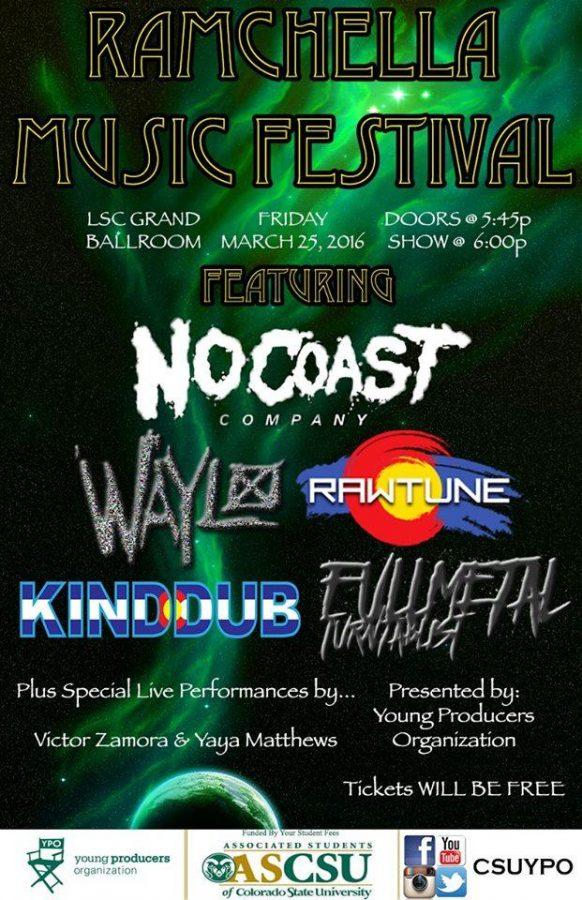 Friday, March 25th, the Student Center’s Grand Ballroom came alive for CSU’s very first student-run music showcase, Ramchella. Unlike past concerts held at CSU, this one was created by the Young Producer’s Organization (YPO), a student organization with a history of creative projects. This year they decided to take on a massive project highlighting a mix of genres with music groups including at least one current CSU student. Funding primarily came from ASCSU. Additional sponsors included Up ‘N’ Smoke and Hood Life.The five-hour event grossed a total of 210 tickets.

The showcase kicked off with a rap performance by junior, Victor Zamora, also known as Kingso. The human development and family studies major and YPO member was optimistic about his set despite the initially small audience. Kingso’s set was followed by a duo made up of singer/songwriter Yael (aka junior, Yaya Matthews) and sophomore, guitarist Michael Wells, both of whom study sociology and computer science. Yael and Wells engaged the growing crowd, increasing anticipation for their first EP that is in the works.

Rawtune, a 4-piece reggae group continued to feed tunes to listeners during their first on-campus performance. This particular performance was exciting for the group because three of the members are alumni and their drummer, Matt Pintauro, graphic design major will be graduating in May. Their connection with the audience was through improvisational song writing. Rawtune asked the crowd to pick a key signature for them to use to write and perform a quick song on stage.

Clarke and Arsenault kicked up the energy for the night, including guitar and a guest saxophone player to go spice up their lyrical flow.

By the time the headliner came on stage, the energy from the crowd at the front of the stage was at its peak.

The headlining act, NoCoast, is a rap collective with 11 members, led by third-year, theater major Kent Washington.The energy in the room was intoxicating; together the crowd danced, moshed, and recited lyrics.

“I love [Ramchella] because it promotes entrepreneurship, it promotes local talent, local businesses, and local movements, and we need those platforms as artists to get our artistry out,” Washington commented.

Over the past two years they have performing, they have quickly gained momentum in the Northern Colorado music scene playing various underground festivals and opening for nationally-touring acts such as Hopsin and Flatbush Zombies. Similar to Kind Dub, they define themselves as a growing company. They create produce graphic designs and videos in addition to their music.

Fourth-year students, Taz Arguello and Diego Felix were in the unique position of coordinating Ramchella as well as performing in it. Arguello, a YPO board member, has thought about the project for years, but didn’t have all the necessary resources come into place until last year. Lineup changes and financial concerns forced to be rescheduled from its original date of September 25th, 2015. Communications major, Khalil Perkins was chosen to host Ramchella based on his comedic hosting skills at the Clash of the Titans event, a rap battle put on by United Men of Color and ASCSU.

“Events like this make me wanna work harder,” Perkins said. “It’s awesome to see so many dedicated individuals put their energy into doing this event, especially with the stress of college.”

Collegian Reporter Dominic Fante can be reached online at music@collegian.com.