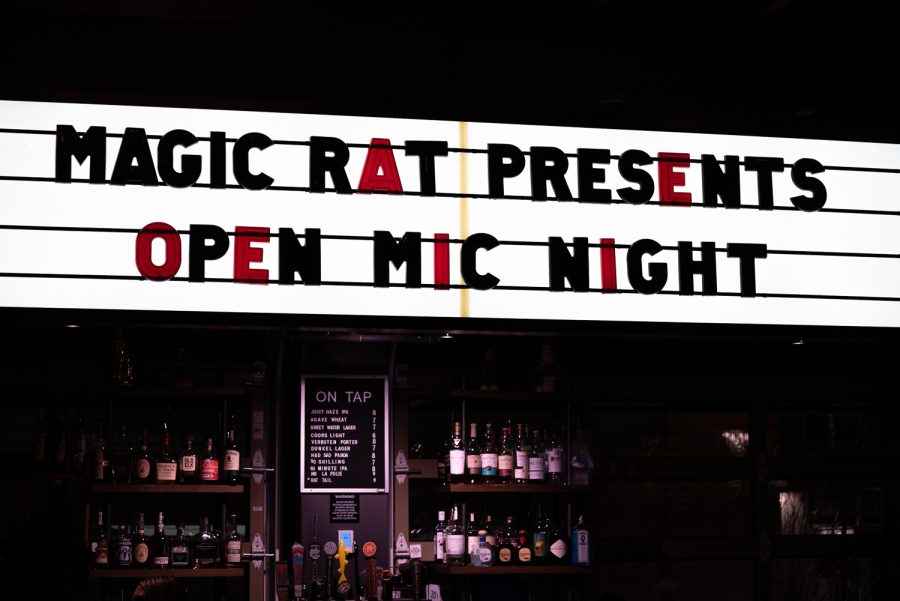 The Magic Rat Live Music bar showcases the night's entertainment in lights near the Elizabeth Hotel Jan. 26. The open mic event was hosted by the KCSU radio station partnered with Land of Bands.

Freedom of speech is perhaps the most divisive of the rights so long ago promised to Americans. The extent to which it protects our speech and actions is constantly debated in a multitude of social arenas, including legal matters settled in court and cultural matters settled on social media.

However, we often forget that freedom of speech is not exclusive to the political sphere but is also an extremely influential element in matters regarding education, scientific advancement or economic industries. One area impacted by freedom of speech is often overlooked: the world of art — specifically, the music industry.

The music industry is notably differentiated from other artistic industries by its obsession with targeting popular topics or stances, oftentimes at the expense of artistic integrity — a practice colloquially known as “selling out.” Thus, musicians often face difficult decisions regarding every aspect of their music: What should the lyrics be saying? What genre should be evoked? What vocal styles should be inflected?

To achieve success, it often seems as if the answers to all these questions should be in line with whatever the culture is devouring at that moment, and oftentimes artists take this route desperate to break into the mainstream of such a competitive industry.

But what about artists who decide against this, who decide to break the norm and produce music that lives outside the machinations of “big music”? At the intersection of artists on the fringe and the pressure of the popularity-obsessed industry is where the impact of freedom of speech lies.

Since the birth of rock ‘n’ roll — characterized by its taboo subject matter and loud, intense sound — the music industry bigwigs and sometimes even the government have attempted to silence these deviations from musical norms. In the 1980s, concerned parents lobbied for the censorship of rock bands such as AC/DC and Def Leppard, requesting that content warnings be put on their records.

Even now, these attacks on musical free speech continue. Legal debates rage over whether or not rap lyrics describing violence can be used as evidence in court cases, with many decrying this practice as an infringement of free speech rights.
“It is small-town music scenes like Fort Collins that fight the music industry’s pervasive culture of infringing upon the free speech of small artists who represent groups seen as outside the norm.”
While these examples present major, wide-spreading examples of freedom of speech being attacked in the music industry, they are merely demonstrative of the suffocating culture of silencing artists who promote sociocultural groups or stances that exist outside the norm pervading the industry.

These smaller fringe artists and movements are often suffocated by industry roadblocks. Greater barriers, such as leading music label reluctancy to sign these artists or larger venues denying them opportunities to perform, combine with smaller problems, such as content platforms like YouTube revoking monetization on music videos that they deem inappropriate for advertisers.

So how do these smaller artists get their music out? How do they amplify their voices to continually bring attention to these subject matters that the industry deems inappropriate? They utilize the existence of small-town music scenes that — while not as industry-connected as national scenes like Nashville, Tennessee, or Los Angeles — foster the growth of artists who haven’t yet conquered the music industry beast.

These scenes are complex in the way they function, being an amalgamation of demographic factors including location, average local age and more, and yet they are vital to the existence of the music industry’s counterculture.

Our very own Fort Collins, while not small itself, is an example of one of these small-town scenes fighting the good fight against the infringement of free speech in music. It is a college town filled with open-minded youth that, in essence, define the music of the fringe artist by oftentimes crusading for awareness of the very same subject matter present in their music. It is also a cultural hub, being one of the largest cities in the state as a whole.

Beyond the demographics, Fort Collins has a carefully cultivated music scene that combines the aforementioned music of fringe artists with the unique Colorado-country sound that it built itself upon. Here, everyone gets a shot at telling their story, and venues like Aggie Theatre have concert lineups that go from bluegrass jam-bands to underground rappers in the course of a week.

It is this cultivated fanbase, built upon the origins of the town and the music that came with it, that is introduced to new music and new views that may go against the grain but are respected here all the same.

For instance, Alice Longyu Gao, a hyperpop artist, recently performed at The Coast in Old Town. Her music is a brash, exciting take on traditional pop styles, and her lyrics often advocate for the LGBTQ+ community, a group often dismissed by the music industry. Here in Fort Collins, however, her music was welcomed, and she was given a platform without having to jump through industry hoops and sell out her vision.

It is small-town music scenes like Fort Collins that fight the music industry’s pervasive culture of infringing upon the free speech of small artists who represent groups seen as outside the norm. It is vital that these scenes are supported and continue to grow, for this is the only way to ensure the survival of a counterculture music scene — one that advocates for the groups cast aside and gives voice to issues considered taboo by the mainstream.