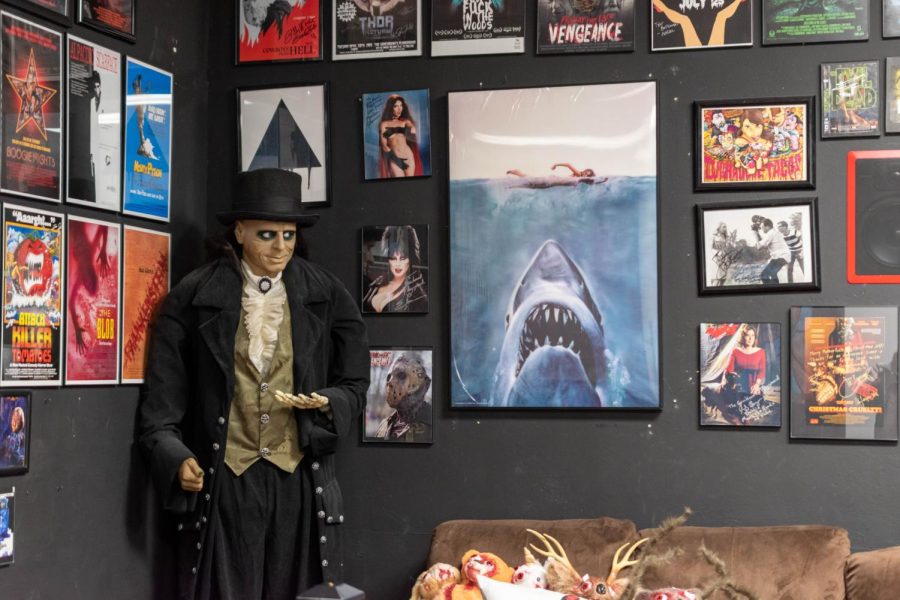 The walls of the Gorehound's Playground's minitheater are covered with movie posters Jan. 22.

The modern perception of horror is often boxed in with slasher films and the strange people who enjoy them. The reality of the community surrounding horror is much more complex and deep than that.

Drawn to horror and counterculture as a teenager, Jeff Abbott created a cultural hub for those interested in horror through his Fort Collins business, The Gorehound’s Playground. The business focuses on renting horror films.

Nothing about The Gorehound’s Playground is cookie-cutter, from the patrons it attracts to the rental movies and merchandise it offers. The entire store has created a concentrated hub for a subculture that otherwise doesn’t exist everywhere in Northern Colorado.

“I wasn’t allowed to watch horror growing up, so I was really drawn to the fact that there was this really strong, tightknit community going to Gorehound’s every week,” said Jordan Wyman, a regular patron of The Gorehound’s Playground.

Wyman described how welcoming and passionate the horror community they encountered was. They said no one would judge you for never having seen a film; rather, they would get excited to share their favorites with you.
“I have more movies in one genre than Netflix has on their whole website.” -Jeff Abbott, owner of The Gorehound’s Playground
The community isn’t the only benefit of attending viewings at The Gorehound’s Playground. The films themselves are often an attraction all on their own.

“There are probably a million movies out there, and Netflix has about 3,000,” Abbott said. “I have 3,000 horror movies. I have more movies in one genre than Netflix has on their whole website.”

This kind of access for the Fort Collins community is essential. Unlike larger cities, like Denver, Fort Collins didn’t have much horror subculture access until The Gorehound’s Playground opened in 2017.

“It’s the inclusivity of it,” Abbott said. “I’m pretty open to all lifestyles and all forms of people, so it’s a pretty warm and comfortable environment for everybody.”

Abbott’s general knowledge of film media is also a big draw for customers. Wyman said Abbott took the time to recommend new, lesser-known movies based on what he knew they liked.

That type of care and knowledge is exciting for those just getting into horror. With such a misunderstood genre, it can feel daunting navigating all of the content that already exists. Now imagine you had an expert in your community who could not only guide you through it but share their passion with you.

“This is kind of my retirement — it’s not really like work, standing around talking about movies all day,” Abbott said.

Horror movie lovers and counterculturists can have a hard time finding their place in small towns and cities. Often the perception is that there is no need to subject oneself to grotesque content, but horror comes in so many forms that it becomes hard to generalize.

“Horror can be funny,” Wyman said, referencing the horror comedies they enjoy among science fiction horror and anything by filmmaker Leigh Whannell.

In pursuit of horror, Abbott created a welcoming space to explore the intimate world of film outside of streaming. The Gorehound’s Playground is a welcomed community essential to patrons like Wyman in sharing passion for horror.

The Gorehound’s Playground is located at 1125 W. Drake Road, Unit B6 in Fort Collins and is open Monday through Saturday from noon to 10 p.m. and Sunday from noon to 6 p.m.