Lady Denim is back with a new drummer, same classic sound 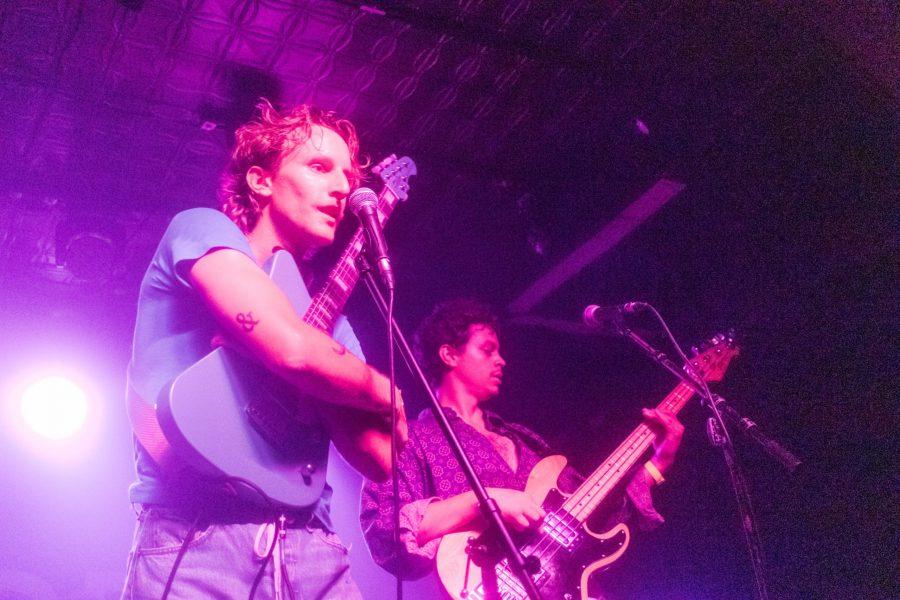 Local indie band Lady Denim rocked the stage of the Aggie Theatre Jan. 20 for their first show of the year back in Fort Collins.

Lady Denim has come a long way from when they started playing together in 2018. The first show they played was put on in the basement of their house.

“We tied Trader Joe’s milk crates together and created a stage,” lead guitarist Nic Lubin said. “The cops came later, and there were about 75-80 people down there. It was cool, man. It started it all.”

While they loved the intimacy of their small basement concert, the band decided that in order to get more recognition, they needed to start playing venues. So they set off to find the place that would give them the chance to grow their experience in live performance.

After knocking on door after door, Lady Denim finally landed at the Aggie Theatre, located in the heart of Old Town Fort Collins. The Aggie allowed them to perform there, and they jumped on the opportunity. Since the Aggie Theatre was the first venue to give them their big break, they have always appreciated coming back and playing there whenever they can.

Lady Denim headlined, and two other bands opened for them. Danno Simpson, a Colorado-based singer-songwriter, started the night. Simpson performed with just him and his guitar for an acoustic solo set.

Next up was Co-Stanza, a pop band who started in Chicago and is now based out of Fort Collins. Their set showcased not only their best songs but also covers of popular songs such as “good 4 u” by Olivia Rodrigo and “Sunday Morning” by Maroon 5. These opening bands did exactly what they were meant to do: pump up the audience and get them excited for the main act.
“Genuinely being together, in that moment, in that music, is something that we all personally feel when we are onstage, and we hope to have that catch on.” -Chris Lubin, bassist for Lady Denim
While Co-Stanza was finishing their set, Lady Denim was partaking in their traditional pre-show ritual, singing “Legend of The Rent” from the 2003 Jack Black movie “School of Rock.” When Co-Stanza’s final song, “I Don’t Mind,” faded out, you could feel the excitement and anticipation in the room. When a couple band members came onstage to set up their instruments, the entire room started to cheer. Everyone in the audience was ready for Lady Denim to come onstage.

Once Lady Denim came onstage, more and more people packed onto the floor. Fans squished together and pushed to get closer to the stage, reaching out their arms for a chance to graze one of the band members’ hands. A mosh pit started in the middle of the floor and continued to grow as more people decided to join in. The floor was filled with energetic, high-spirited fans.

The sounds of their famous songs, such as “Pipe Dream” and “Cherry Limeade,” filled the room, allowing fans to experience the nostalgia they came for. The audience sang along with vocalist and guitarist Nick Lundeen during their favorite songs, allowing the band to bask in the experience of hearing their words sung back to them.

“Genuinely being together, in that moment, in that music, is something that we all personally feel when we are onstage, and we hope to have that catch on,” bassist Chris Lubin said.

Even with a new drummer, Miles Jenkins, Lady Denim never lost their sound. The band said the transition was smooth, and Jenkins fit in perfectly, not missing a beat on any of the band’s classics. The band’s stage presence was sincere. Lundeen talked to the crowd like old friends catching up at a coffee shop, joking about the bidet in the green room.

The band created intimacy in the theater, encapsulating the crowd with their presence. Although the Aggie Theatre is bigger than the basement Lady Denim started playing in, they continue to make their shows just as personable.

As Lady Denim continues to grow, their fans are constantly wondering what is next. As of now, the band continues to make new music and play shows, and they don’t plan on leaving Colorado any time soon. Lundeen and Nic Lubin are currently finishing their degrees at Colorado State University, while Chris Lubin and Jenkins set up roots in Denver.

Nic Lubin said Lady Denim strive to emphasize the idea of doing things no matter what other people say and hope this concept rubs off on their fans.

“Haters gonna hate, man,” Nic Lubin said. “You can’t let people who have such little say in your life determine what you do.”

Fans of Lady Denim or live music can catch one of their upcoming shows in either Fort Collins, Denver or Colorado Springs, Colorado. You can find tickets to their shows at https://www.ladydenimband.com/shows.