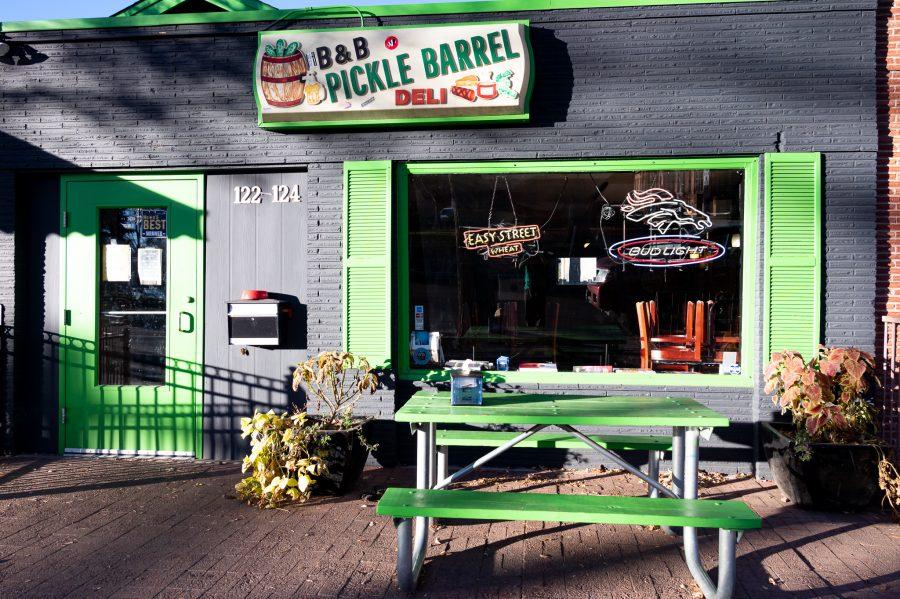 Pickle Barrel restaurant located in Fort Collins Nov. 14. The restaurant was created as a CSU class project by Robert Piccaro and Brenda Smith 30 years ago. (Milo Gladstein | The Collegian)

In the building now home to the B&B Pickle Barrel Deli at 122 W. Laurel St., purchased by Robert “Bob” Piccaro and Brenda Smith in 1988, lies a history enveloped with music and international connections.

Chris Eala, who was born in the Philippines, came to Fort Collins in the late 1950s at the urging of the Colorado State University music department, which recognized his gift of repairing musical instruments. The little shop on Laurel Street became a shop called Chris’ Music.

“I remember thinking, ‘Oh, it’s so small, but it’s so cute’ because he knew how to organize (it),” said Christinia Eala, Chris Eala’s daughter and Lakota activist. “Every inch of that space was … utilized. … He made his own tools; he was an instrumental smith.”

Back then, Fort Collins looked significantly different than it does now; Christinia Eala remembered Prospect Road being the most southern part of town, with a majority of what is now the city as just sprawling farmland.

The family lived at 122 ½ W. Laurel St., just a few steps from the music shop, across the alleyway in a looming, historic seven-bedroom home.

Describing the layout of the house, Christinia Eala mentioned the large French doors in the dining room, lilac bushes surrounding the backyard and the smell of fresh ringer-washed laundry blowing on a clothesline in the Front Range wind.

Christinia Eala came from a multicultural background, splitting the majority of her childhood between the Lakota traditions of her mother and her father’s Filipino traditions following her parents’ divorce.

She remembered participating in the Filipino lechon tradition, in which the family would slaughter a pig and dig a pit in the backyard before slow-roasting the hog overnight to achieve the perfect crisp. The following day, the family would invite neighbors over to enjoy the celebration of culture and connection.

Years later, when Christinia Eala returned from living with her mother, her father discussed his new plans for the home, recognizing the ample space and rooms to fill. He wanted to create a boarding house for international students.

At 17 years old, Christinia Eala was preparing to graduate high school and move to Los Angeles, to the surprise of her family. This created the perfect opportunity for her father to begin renting out the home’s rooms.

“I grew up in a wonderfully cultured … household,” Christinia Eala said. “We had people from … Chile, South America, Central America, Thailand, Afghanistan, … Japan. … It was wonderful.” Christinia Eala mentioned the students gathering with their friends around the large dining room table and bustling in the kitchen, the house swelling with the sounds of music and cooking.

“The town was and continues to be so darn white,” she said, and the boarding house became a safe place for tradition, cultural appreciation and community at the time.

The building, even now, is representative of CSU and Fort Collins traditions in the form of Pickle Barrel sandwiches.

Upon entering, I was hit with the aroma of warm bread and the rumble of a bustling crowd — sprinkled with the occasional sizzle of onions on the grill. At 1 p.m., the lunch rush was seemingly unrelenting.

Third Eye Blind’s 1997 hit “Semi-Charmed Life” accompanied the cacophony of kitchen chaos as the employees worked around one another like a well-oiled machine, occasionally yelling directions to keep up with the influx of orders.

The restaurant is now owned by Michael and Kara DiTullio, who bought the Pickle Barrel entity and recognized the importance of the restaurant as a staple in the community’s history.

Although the building is now home to new traditions, its roots are fully intertwined with the roots of Fort Collins itself.

“He was a pretty cool guy, that dad of mine,” Christinia Eala said. “That’s how I pretty much have tried to live my life. … I still have his old filing cabinet, and on the side of it it says, … ‘Don’t become part of a community to see what (it) can give you but to see what you have to offer — to add — to the community.’”