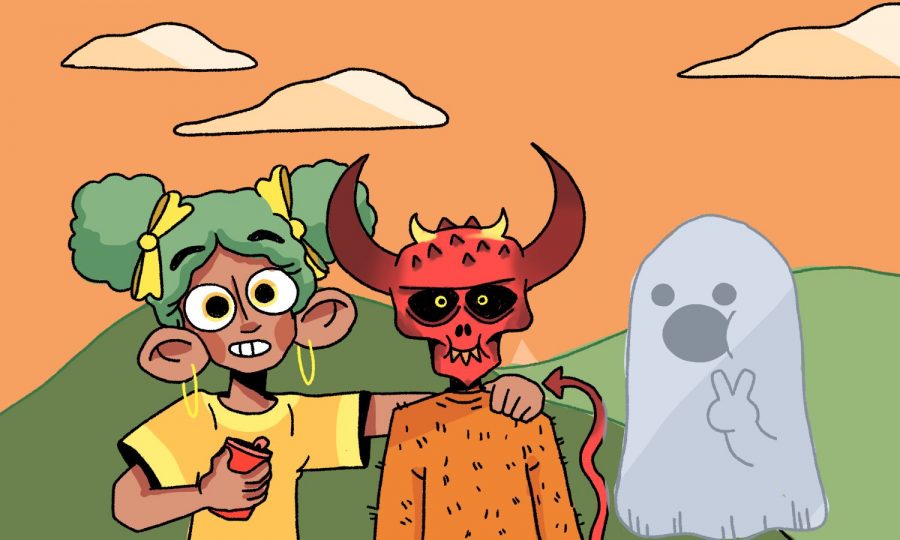 For all the ’90s and early-2000s kids, the Halloweentown franchise was the ultimate movie series to watch in October. If you didn’t own the DVDs, you may have been like me and taped each movie when it came on what is now Freeform’s 31 Nights of Halloween.

Before jumping into ranking the movies, it’s time for a little synopsis of Halloweentown. Marnie Piper finds out she and her family are witches in the first movie. Her mother, Gwen Piper, has kept this a secret in order to protect her children.

However, Gwen’s mother, Aggie Cromwell, has her heart set on training Marnie as a witch. Aggie is inarguably the coolest grandmother due to her chaotic and whimsical nature. Her home is in Halloweentown, which is a world for monsters, witches and other immortal creatures to live happily and without the judgment of mortals.

As an older sibling, I really wish I could say Marnie is the smart one — but she is not. This series would have ended halfway through the first movie if she didn’t have help from her younger siblings, Dylan and Sophie Piper.

Now that we are caught up, let’s hop into ranking and reviewing this iconic franchise. Beware of the many spoilers this review contains.

It is rare that a sequel surpasses the original movie, but “Halloweentown II: Kalabar’s Revenge” is simply the most iconic of the Halloweentown films due to its elite level of humor.

To start, it is absolutely hilarious how quickly Marnie gives away her family secrets to the cute boy, “Kal,” she met a few minutes ago. After just defeating Kalabar, you would think she would not let a stranger named Kal — short for Kalabar Jr., but Marnie doesn’t know that — enter her grandmother’s room and definitely be careful not to let him steal Aggie’s spell book.

However, the spell book is stolen, and somehow, Marnie does not even suspect Kal, so they travel to Halloweentown to investigate and discover the whole town is under the “gray spell.” This spell basically just turns everyone into humans and makes them very, very boring.

Then, we get introduced to the best Halloweentown character of all time: Gort. Gort and his crankiness are essential to the movie despite not being at all essential to the plot. All lost items from both worlds end up in his smelly, messy house. Neither of Aggie’s spell books are there, though.

We then have another iconic moment when the spell is reversed because Marnie accidentally says the spell backward. We soon learn the spell is simply “apart” and she had said “trap a.” I hope the writers felt really proud of themselves for that one.

To top the movie off, we learn that Kal’s dad is Kalabar (duh), and the dad he has in the mortal world who has been flirting with Gwen the entire movie is a golem made out of frogs, which explains the frog costume, and lime ice cream. Peak comedy.

The reason “Halloweentown” falls short of its sequel is simply because our characters are just starting their adventures. They don’t know how to use their powers much beyond Sophie’s legendary floating cookie moment as an accidental act of rebellion to no cookies before dinner.

I cannot ignore the superiority of Dylan’s jokes and questioning of Halloweentown as a whole. The movie would lack all comedy if Dylan was not there to question the logic of this illogical place.

After sneaking off to Halloweentown, the kids soon discover the town is in danger and it’s up to them to save it. The best part of this movie is exploring Halloweentown for the first time with Marnie, Dylan and Sophie.

It’s also important to note that the demon threatening Halloweentown ends up being Kalabar, the mayor of the town and Gwen’s ex-boyfriend. It comes as no surprise to viewers but somehow a huge surprise to most of Halloweentown.

The cast of “Halloweentown High” is absolutely iconic. Not only do we have Lucas Grabeel, best known for playing Ryan Evans in “High School Musical,” as Ethan Dalloway, but the absolute smokeshow Finn Wittrock made his film debut as Cody in this movie.

The best part about this movie is Aggie’s inability to teach any classes as a substitute teacher.

Skipping past the entire elaborate plot about the Knights of the Iron Dagger in this movie, the carnival scene allows this sequel to be significantly better than its successor, “Return to Halloweentown.”

Nothing is more iconic than the transfer students from Halloweentown trying to show the mortals that immortals are peaceful and normal by creating the lamest haunted house of all time.

To finish it off, Marnie has a happily-ever-after moment with her love interest, Cody, who is not even mentioned in the following and final movie.

For the sake of reviewing the movie itself, we are going to ignore the incredibly confusing and heartbreaking recasting of Marnie.

“Return to Halloweentown” is basically just a knock-off Harry Potter movie with a bunch of plot holes. Magic is banned on campus, but everyone constantly uses magic. To fully understand the plot of this movie, I would have needed my own copy of Halloweentown’s Witch University handbook — which Marnie clearly did not even skim before attending.

One of the worst parts of this movie is the undeniable cheesiness of the Sinister Sisters and the Dominion. Despite great outfits, they have no backstory and are obvious plot devices.

Luckily, the movie is saved by the fact that Gwen forced Dylan to attend the university and to keep an eye on his sister. Of course, Gwen’s failing real estate business and bizarre ways of communicating with her kids added to this. I think my favorite moment was when she appeared in the washing machine to talk to Marnie.