‘Into the unknown’: The Crooked Rugs on forging their own path 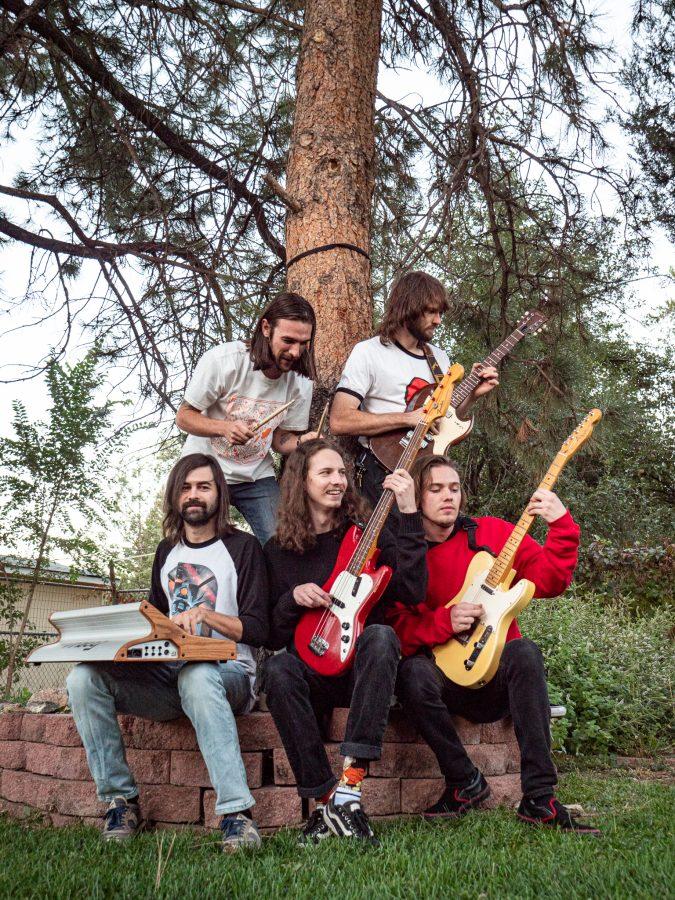 The members of the Crooked Rugs pose for a picture during band practice Sept. 22. Their album THAT! releases Sept. 24. (Tri Duong | The Collegian)

Local indie-rock group The Crooked Rugs is set to release their sophomore album “THAT!” Sept. 24. The album combines a diverse set of influences from the jazz classics of the ’60s to bluegrass and surf-rock, creating an explosive psychedelic-rock record filled to the brim with spacey effects and layers of melodic instrumentation.

“THAT!” is the second full-length album the band has released so far, a follow-up to their January release “IT!,” which featured similar tones but more heavily employed the punk-adjacent attitude common in modern indie-rock.

“’IT!’ was a reflection of the whole lockdown year, so (‘THAT!’) was a continuation of accepting the new normal and settling into the unknown,” said Jayce Haley, vocalist and guitarist for the group.

Although the two albums don’t revolve around a specific narrative or concept as of now, drummer for The Crooked Rugs Nolan Brumbach alluded to an enigmatic story the band has started to connect to their work.

“You can think of these first two albums as the first two chapters in an unwritten story,” Brumbach said.

“The sense of space is touched upon in a few of the songs (lyrically) as well; we tried to present that motif through different means — through the lyrics and then through the music itself.” -Jayce Haley, The Crooked Rugs’ vocalist and guitarist

Brumbach said he sees the songs as separate entities that don’t depend on each other for context.

“Every song is different. … We put them on albums, but they could really be their own thing,” Brumbach said. “It was hard to pick a single because they all worked so well (alone).”

In the end, the group chose to release two singles off the album, “Proprioception” and “Slugface,” each with an accompanying music video. The two songs not only represent the variety that exists within the band’s music but that the songs play off a kind of duality with each other.

“‘Slugface’ is super fast and in your face, and ‘Proprioception’ is one of the more laid-back songs on the album,” Brumbach said.

This duality is also reflected in the cover art for each of the singles, with “Proprioception” showing a scene in the day and “Slugface” featuring the same scene at night.

Haley said the major connection between the group’s seemingly separate aesthetic themes of the desert and outer space is the common property of vastness.

“The sense of space is touched upon in a few of the songs (lyrically) as well; we tried to present that motif through different means — through the lyrics and then through the music itself,” Haley said.

Haley said this idea is particularly present in the accompanying artwork for The Crooked Rugs’ singles and albums, each featuring a cactus surrounded by an empty, expansive background.

“We chose this aesthetic and then wrote this music, and now they’re playing off each other in ways we didn’t expect,” Brumbach said.

From its first few seconds, their song “Everything You See” stands very clearly as an homage to The Doors, employing the tones and dynamics between keys, bass and guitar signature to the group.

Similar to “Everything You See,” “Say It Again” pays tribute to The Crooked Rugs’ classic influences, this time to the jazz of the ’60s and ’70s.

“Say It Again” presents its jazz influence in a tasteful, modern way that keeps the character of the band from getting lost in an effort to diversify. According to the band, it was originally titled “Uptown F*ck,” referring to its 5/4 time signature, which “f*cked us up when we played it.”

The sixth track of “THAT!,” “Jams To Fall Asleep To,” is a short but sweet interlude between the two halves of the album. The song features a classic country bassline, twinkling guitars, a playful synth line and simple but well-placed percussion, all of which work together to create an endearing song true to its lullaby name.

The second single the band has released off of “THAT!,” “Proprioception,” follows in the tone set by “Jams To Fall Asleep To,” opening with a soft, distant guitar riff that leads into a light psychedelic jam. The song’s false ending a little more than halfway through its runtime is an interesting choice, especially since the second section of the song doesn’t depart far enough from the first to demand such a distinct change.

The delicate fluttering guitars, jazzy keyboard riffs and soft percussion of “Subversion” certainly gives the listener another taste of The Crooked Rugs’ jazz influence, although the guitar solo of its second half draws from the classic psychedelic-rock of the early ’70s.

When compared to their previous album “IT!,” “THAT!” feels ultimately overcrowded and lacking the negative space that gives individual elements the room to breathe.

While the style of production was definitely intentional, it seems the band was caught up in the excitement of filling the mix with interesting melodies and unique sounds that they overlooked the power of simplicity.

Many artists have used layering and reverb in an attempt to achieve an ethereal, psychedelic sense of space with varying levels of success. There is a thin line between a complex and otherworldly sound and overproduction, a balance The Crooked Rugs seem to struggle with in the more chaotic songs of “THAT!”

Throughout its runtime, “THAT!” explores a wide range of tones, moods and dynamics between instruments to create an interesting and engaging work. The prominence of the keyboard on “THAT!” shows a clear progression in exploring the dynamic of the band since “IT!” was released, working in the band’s favor to distinguish them from a generic, guitar-heavy psychedelic sound.

“THAT!” is an excellent example of the independent artists in the Northern Colorado scene who are forging their own paths, fueled by a genuine passion for the work they’re creating.

You can find “THAT!” on major streaming platforms starting Sept. 24. The Crooked Rugs will be playing an album release show at The Lyric Sept. 25.