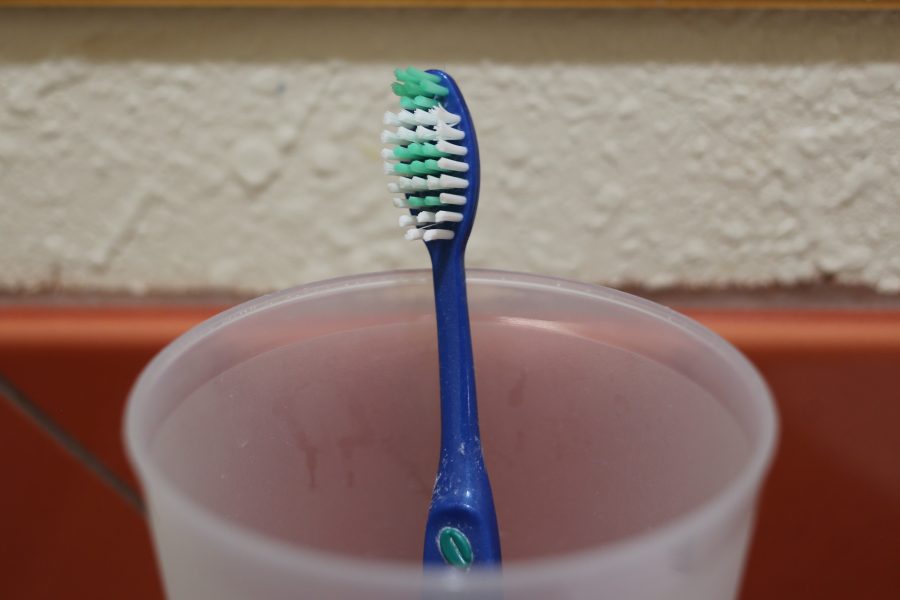 The dangerous implement that led to the death of a fraternity member sits dormant in a bathroom. (Kooky Boredman | The Unprecedented Times)

Late last night, Richard “Throat Goat” Cox, member of Grammar Apple Uff-da, was pronounced dead by paramedics in the bathroom of his fraternity house. The cause of death was determined to be asphyxiation after Cox choked on a toothbrush in a gag reflex competition.

Fellow competitors said the competition started out friendly until Cox began boasting about the length of his throat.

“We called him the ‘Throat Goat’ because he was the best at chugging beer,” said Nick “Hefty” Johnson, Cox’s fraternity brother. “He may have been 6-foot-4(-inches), but his throat was 6-foot-6(-inches).”

Johnson said the person who gagged the least would get an exclusive opportunity to star in an upcoming documentary directed by Fraternity Chi, a popular movie documenting the lives of young men in fraternities. Johnson said the studio’s upcoming movie was looking for fraternity brothers to talk about the ways they have dismantled toxic masculinity within their organizations.

“As brothers, we felt comfortable enough in our masculinity to push our gag reflexes to their limits,” Johnson said. “This was just one example of how close we are as brothers.”

Dr. Austin While, a physician at the Colorado State University Health Network, said this was a poor attempt at dismantling toxic masculinity.

“Everyone should be gagging on their toothbrush if they are using it incorrectly,” While said. “All people gag on hard plastic tools that aren’t supposed to be shoved down one’s throat.”

According to While, our gag reflexes are meant to keep us from choking on foreign objects that can potentially hurt us and prevent us from swallowing objects that our bodies can’t digest. Without it, While said, we could end up dead.

In terms of dismantling toxic masculinity, Diego Sands, a member of the Pride Resource Center, said it takes more work than shoving a toothbrush down your throat to unlearn toxic habits.

Sands said it’s common for cisgender, heterosexual men to measure their masculinity against what they perceive as “gay.” This is why many cis-het men believe having a gag reflex further confirms their heterosexual identity.

“In conversations about sexuality, cis-het men have told me that they accept their gay peers,” Sands said. “However, they could never be gay, citing something arbitrary like having a gag reflex.”

According to Sands, a self-proclaimed queer person with a gag reflex, they wish cis-het men would stop equating nonsexual acts with queerness or masculinity.

“Doing so only promotes the idea that queer people are inherently sexually deviant and limits sex to the constraints of penis-vagina sex,” Sands said.

Johnson said it will take time for him and his fraternity brothers to deal with Cox’s death. In honor of Cox’s memory, Johnson said the organization will be hosting a beer-chugging competition within the fraternity, after which the winner will carry on the name “Throat Goat.”

“I’m so grateful to have been able to witness the things that ‘Throat Goat’ could do with his throat,” Johnson said. “His name will not die in vain.”

The Unprecedented Times reporter Wh*re-hey Espinoza can be reached at entertainment@collegian.com or on Twitter @jorgespinoza14.