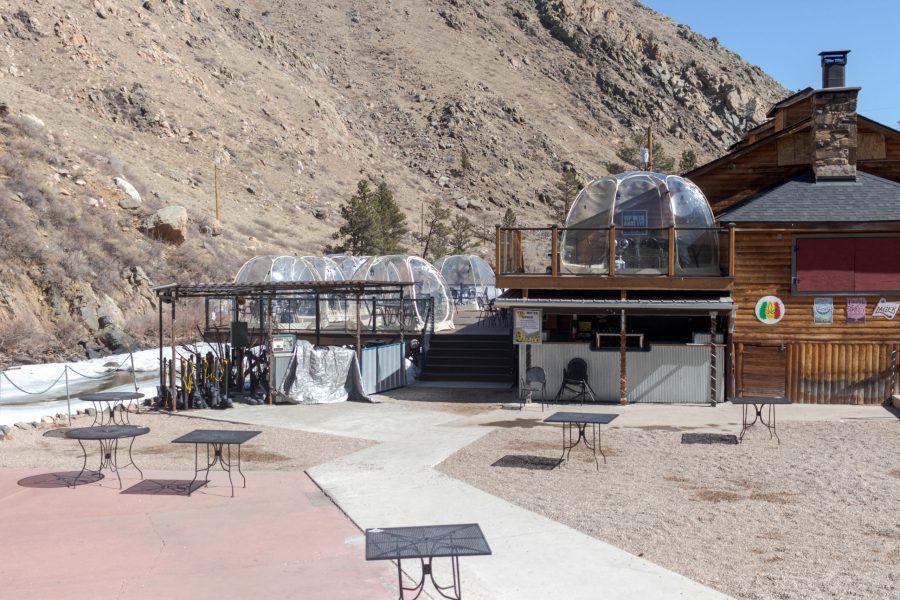 Outdoor dining tents are seen at the Mishawaka Amphitheatre. Because of the COVID-19 pandemic, the Mishawaka implemented these to ensure distance between patrons. March 6th, 2021. (Michael Marquardt | The Collegian)

In March of last year, the COVID-19 pandemic hit the entertainment industry like a tidal wave. In a matter of days, venues around the country had shut their doors, and for some of them, it was for the last time. A survey conducted by the National Independent Venue Association in June 2020 found that 90% of independent venues reported that they would close permanently without federal funding.

Through community support and ability to generate revenue, some venues were able to survive and even grow, the pandemic giving them the opportunity for metamorphosis and necessary experimentation.”

While some of these concerns were alleviated by the Save Our Stages Act, introduced to Congress in July 2020 and passed as part of a COVID-19 relief bill, NIVA’s predictions were still felt in Fort Collins when venues like Hodi’s Half Note and Pinball Jones’ Campus West location closed permanently.

Through community support and ability to generate revenue, some venues were able to survive and even grow, with the pandemic giving them the opportunity for metamorphosis and necessary experimentation.

One such venue is The Lyric, a multimedia entertainment venue that featured some of the only live shows during the pandemic thanks to their outdoor stage and local connections.

The venue began as a movie theater, showing everything from classic blockbusters to avant-garde art films. Over the past several years, the theater has branched out from their cinema beginnings, looking to become a hub for the local creative scene.

“I’m trying to erase from everyone’s mind that this used to be a movie theater,” said Ben Mozer, The Lyric’s owner.

Mozer said that the closure of movie theaters worldwide just sped up the transition from movie theater to an entertainment venue that caters to all artistic events, including live music.

“I had a 10-year plan to move from being a movie theater to being an entertainment venue,” Mozer said. “The pandemic made it all happen in a matter of months.”

The first few weeks of the shutdown were stressful, with no revenue coming in and no prospects for an immediate source of income, but once government relief packages came in, the venue was able to work on transforming the space, Mozer said.

The venue has also created a symbiotic relationship with local bands, offering one of their theaters as a free rehearsal space if the band agrees to perform for an event. It’s this type of exchange that the venue hopes they can create with all types of creatives in the community, cultivating a scene that connects artists across mediums.

A venue that cemented itself as a landmark in the local scene years ago is The Mishawaka Amphitheatre, a music venue nestled between the walls of the Poudre Canyon. With a stage perched right over the Poudre River, the venue is famous among the Fort Collins community for a one-of-a-kind concert experience.

With the arrival of COVID-19, the venue was hit hard financially as restrictions halted live shows and touring artists were forced to drop out. The venue also faced the looming presence of the Cameron Peak fire over the summer, with the wildfire roaring only a couple miles away.

Luckily, the building remained untouched by the fire, and the attached restaurant was able to provide the venue with a source of income throughout the pandemic, with a supportive community making the drive up the canyon for take-out.

“We’re super grateful at the Mish for all the love and support Northern Colorado has given to us,” said Will Reutemann, the venue operations and productions manager.

As restrictions on outdoor gatherings were lifted, Mishawaka was one of the first and only venues to reopen.

Reutemann said that complying with the Centers for Disease Control and Prevention guidelines and state restrictions without any real instruction or example was difficult, with the venue having to reinvent ticketing systems and daily operations.

“It wasn’t as if I could look at another venue and say, ‘How are you all doing it?’” Reutemann said. “We were one of the first music venues to hold ticketed and seated concerts.”

Reutemann and his team developed a system of staggered check-ins for guests to eliminate lines and a more rigorous cleaning system for audio equipment and green rooms — pandemic-era practices he said the staff plans to continue after restrictions are relaxed.

“I think this is going to be a whole new beginning for venues,” said Reutemann.

Overall, the voices of venues who were able to make it through the first year of the pandemic are optimistic ones. Reutemann said that Mishawaka plans to hold COVID-19-safe outdoor shows this summer — a beacon of hope for the gradual return of local music.