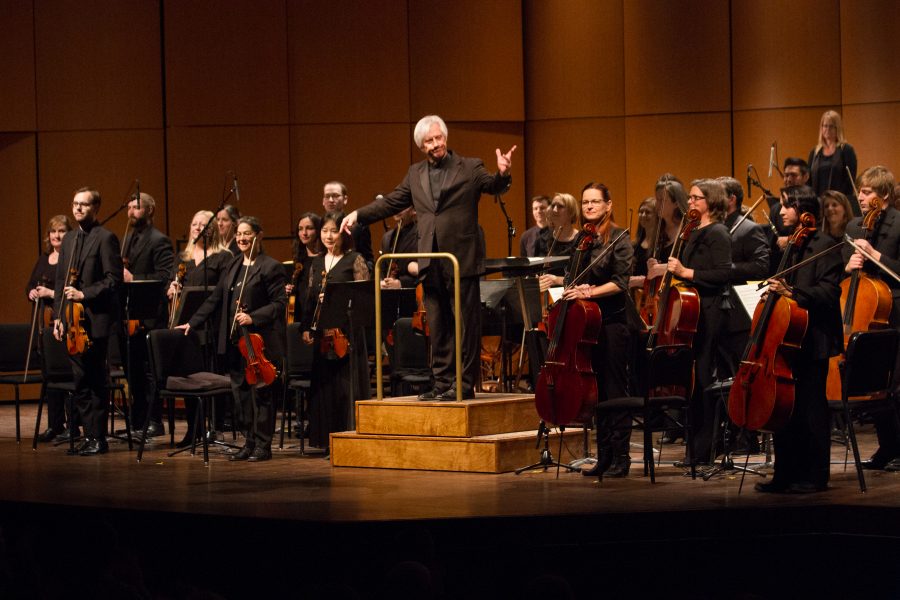 Conductor Wes Kenny prepared to lead the Fort Collins Symphony in a bow before intermission during their performance at the Lincoln Center on Saturday, Feb. 3, 2018. Wes Kenny directed for the entire duration of the performance, however, some of the musicians switched during the intermission. (Josh Schroeder | Collegian)

One element that sets classical music apart is its nature to keep the thoughts and imagination of its composer alive long after their life ends. It gives the performers, as well as the listener, a chance to connect with another human being who could have lived hundreds of years ago, to hear the ethereal landscapes and dark worlds composed of only sound, dreamed up by one human brain.

Today, a decreasing number are fluent in its language and able to communicate the emotions and stories of the compositions to the modern world.

Among those few remaining are the Fort Collins Symphony, which has been performing for almost 100 years since it was founded as the Fort Collins Concert Orchestra in 1923. This past year the symphony has performed unlike ever before, streaming virtual real-time concerts and bringing the traditional art of classical music into the digital age.

This weekend, the symphony is performing the concert “Love Notes,” a compilation of pieces from classical and romantic-era composers. These pieces focus on the expression of love and heartbreak, using the orchestra as a vessel for communicating its complex emotional nature. The concert will consist of pieces by four different 19th century composers.

When the Fort Collins Symphony got together for the very first time as an ensemble after everything had collapsed, … it was truly an emotional reunion.”-Wes Kenney, music director and conductor

Wes Kenney, music director and conductor of the Fort Collins Symphony, said each piece he performs is more than just a rendition or interpretation of another artist’s work. He believes that when performing a piece, it’s important to communicate what the composer intended as closely as possible.

Some composers make this easier on the musicians trying to recreate their work than others. Kenney said that Gustav Mahler, one of the composers whose work will be appearing in “Love Notes,” was “one of the great neurotic artists. … He put so many details into his music to make sure that you understood what his intentions were.”

Not only does Kenney believe musicians should be trying to honor the original intentions of the composer, he feels that connecting with the emotions and understanding the conditions a piece was written in is also important.

One example of this is Johannes Brahms, one of the composers featured in this weekend’s show, who used his works as an outlet for his struggles with romance.

“(In his piece “Liebeslieder,”) you can feel from Brahms the myriad of emotions he must have gone through in a love life that was never stable for him,” Kenney said.

This emotional connection between composer and musician is a vital part of making a performance feel authentic and providing that connection to the audience.

“If you want to play a composer such as Brahms … (who) really deals with a … deep emotional state, you can’t really act cool,” Kenney said. “You have to put your emotions out on your sleeve.”

The coronavirus pandemic has a detrimental effect on all forms of performing arts, and the symphony is no exception.

The symphony’s main source of revenue, live ticket sales, has been extremely limited due to pandemic regulations on large gatherings. Because of these budget constraints, the pieces included in “Love Notes” are all written for string instruments, with the exception of harp and vocal performers.

The pandemic has not only impacted the financials of the Fort Collins Orchestra, but the 6-feet requirement of the COVID-19 protocol disrupts the essential dynamics between the musicians and the conductor.

As a conductor, it’s his role to try and unite the musicians and make them feel like they’re a part of an ensemble again. The lack of an audience can also affect the performance.

“You do your final cut off — and there’s silence,” Kenney said. “It hurts.”

However, he said the emotional connection these musicians have with each other helps smooth the transition.

“When the Fort Collins Symphony got together for the very first time as an ensemble after everything had collapsed, … it was truly an emotional reunion,” Kenney said.

And this emotional connection between the musicians, the composer and the audience is what makes the experience of a symphony performance valuable. To the skeptic who might view these live performances as an outdated tradition too slow for the fast pace of our modern world, consider that, at its core, enjoyment of a classical performance comes when viewed from the lens of emotional expression.

“It depends how willing you are to explore the human condition,” Kenney said.

The livestream of the concert will begin at 7 p.m. on Feb. 12, and the full performance will be available to patrons with a ticket until 10 p.m. on Feb. 14. Students have the chance to purchase tickets at a discount price of $10 using the code “Student Love.”