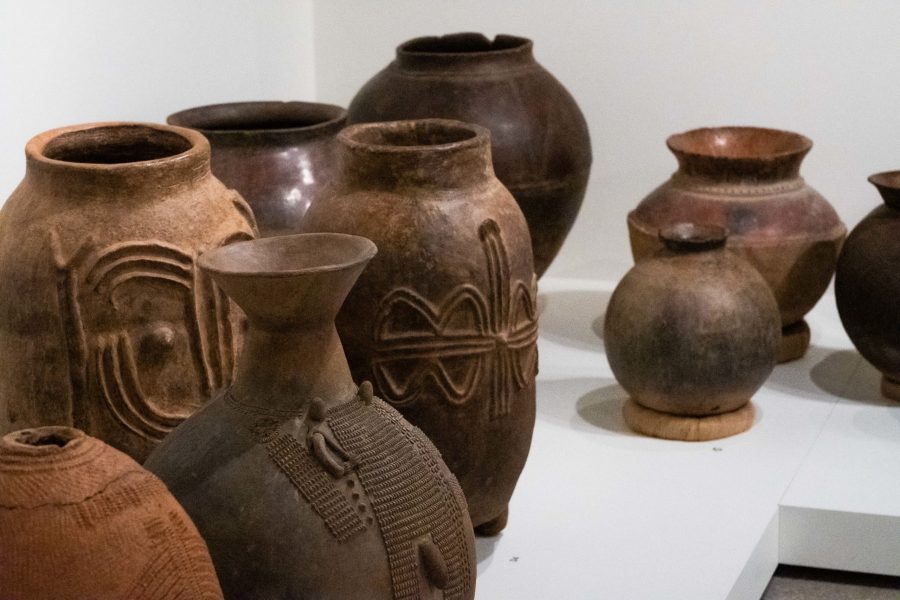 Pottery at the Gregory Allicar Museum of Art in the Shattering Perspectives exhibit. (Max Hogan | Collegian)

The history of art is complex, one that reflects the interactions between cultures and the way societies change over time. A dark history of racism and colonization looms over galleries featuring objects from Indigenous cultures worldwide; art museums are no exception.

Tucked away in an inconspicuous corner of the University Center for the Arts on Colorado State University’s campus, is an extensive collection of pottery from all over Africa.

“Shattering Perspectives: A Teaching Collection of African Ceramics” is an exhibit that features 141 ceramic vessels from 57 different African cultures, varying in size, shape, color and texture. Some of the pieces are several feet wide, others are small enough to fit in the palm of a hand.

“(Shattering Perspectives) is a way to sort of counter this idea that there exists a monolithic singular entity of Africa, bringing to people’s attention to the fact that it’s made up of many countries full of many different, diverse, specific, unique cultures.” – David Riep, associate professor of art history at CSU and associate curator at the Gregory Allicar Museum of Art.

Lynn Boland, director and chief curator of the Gregory Allicar Museum of Art, said the show is the museum’s most ambitious project, describing it as a blockbuster. He said the current exhibition sheds light on “a world-class collection of African ceramics of a scope and caliber that can’t be seen anywhere else in this part of the country.”

“Even here, where these pots live, having them gathered and on-view in one place at one time is a unique experience and a special opportunity,” Boland said.

The exhibit is on display in the Gregory Allicar Museum until April 10 and open to all CSU students and staff.

David Riep, associate professor of art history at CSU and associate curator of the Gregory Allicar Museum, put on the exhibit with students from his art history seminar course last spring. The students were tasked with curating, designing, writing about the pieces and providing context for the viewers.

The students decided the central theme of the show based on the seminar, which focused on the historical representation of African art in Western museums, and the complex relationship of colonization and imperialism that accompanies art from the continent.

“The trend, up until very recently was that you wouldn’t have the name of the artist, and it would just say ‘Congo culture’ or ‘Yoruba culture,’” Riep said. “All of these were linked to a culture rather than an individual. When you compare that to Western art in the very same museum, … we know exactly who made them.”

According to Riep, the information about the artists of these pieces was lost due to the Western collectors’ skewed views toward the very cultures they were collecting from.

“They were viewed as primitive, naive and underdeveloped and as not having a capacity for creative output — to make art, essentially,” Riep said. “And so no one bothered to ask who made this.”

This marginalization of art as a product of a culture rather than something influenced by the individual who created it is something the curators tried to remove themselves from, paying respect to the artists who created the featured pieces even when they were credited as an “unknown” or “unidentified” artist.

“We’re trying to make viewers come back to the individual with all of these, without having this object that represents this monolithic culture,” Riep said.

Although this distinction may seem small, it shows a shift in the world of art toward the way these pieces are viewed: individual masterpieces made by a skilled worker rather than the product of what was perceived as an inferior culture.

Poor media representation that paints a selective narrative of poverty, drought and disease can lead Western audiences to have an uninformed perspective of people living in the region as undeveloped, similar to the historical views held by Westerners that Riep and his students are trying to dispel.

Another way the curators of “Shattering Perspectives” are trying to change the way viewers think about African art is in its diversity. In the West, Africa is often referred to as a single place rather than a collection of countries and people with distinct differences in ethnicity, language, culture and overall lifestyle.

“(Shattering Perspectives) is a way to sort of counter this idea that there exists a monolithic singular entity of Africa, bringing to people’s attention to the fact that it’s made up of many countries full of many different, diverse, specific, unique cultures,” Riep said.

When seeing the show firsthand, the difference between pieces is clear. Whether it’s the size of the communal beer brewing vessel from a Bwa artist from Burkina Faso or the sculpted, oblong-headed figures adorning the sides of a ritual vessel created by a Yoruba artist, each piece has distinct features that show none could be made by the same two hands.

“With art history, I always tell my students that art is an expression of yourself and the world that you live in,” Riep said. “And so it makes perfect sense that when you enter this particular exhibition you’re going to see this wide array with a lot of diversity.”

The exhibit itself is a testimony to the way pottery has developed and changed in Africa, pushing back on the idea that the cultures there have somehow remained stagnant. Riep said that he wants viewers “to be able to appreciate the richness of art production that you find across the African continent, and to dispel any pre-existing biases of artists.”

To Riep, “Shattering Perspectives” is just the beginning of a conversation about the value of African culture and changing the way we think about the region.

Editors Note: A previous version of this article contained photos for a different gallery. The photos have been removed.