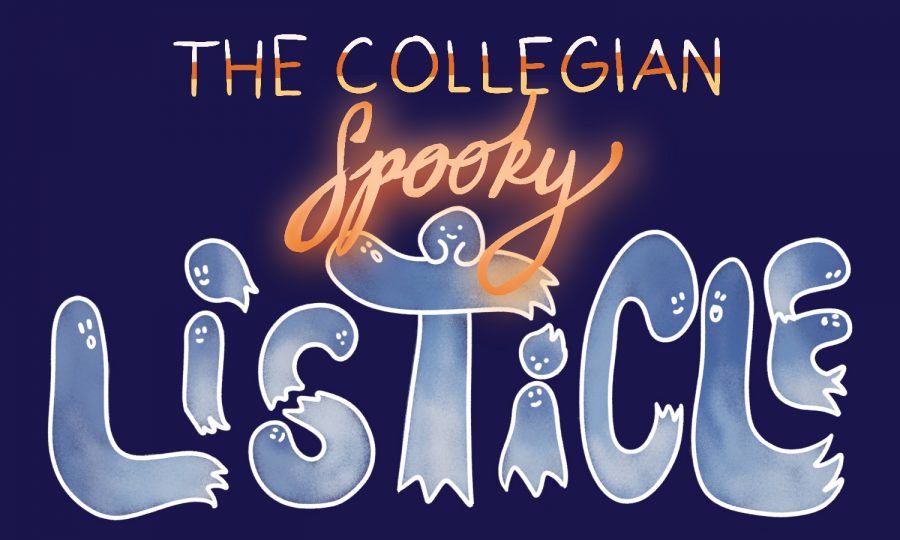 I don’t know about you, but these past seven months have felt like something straight out of “The Twilight Zone.” And not just because my robot maid gained sentience and confessed she was in love with me. (Wow, have I learned my lesson about the pitfalls of modern technology.)

“With life so seemingly out of step with its usual patterns these days, it’s the perfect time to revisit that middle ground between light and shadow, between things and ideas.”

The repressed passions of my techno-servants aside, though, there’s no doubt the intense isolation we’ve experienced this year has significantly warped our perceptions of space, time and even reality itself — so much so that I’ve started having fever dreams about a tiny green octopus named “Mr. Spock” who comes to me with strange prophetic adages like, “The ferrets have been pacified,” and “The day of Og is upon us” — messages which, after some extensive Freudian self-analysis, I have determined mean absolutely nothing except that I should probably stop watching “Twin Peaks” right before bedtime.

“No matter how far away you see it coming, it still seems almost impossible to keep your skeleton fully contained in your skin the moment William D. Gordon first turns around to reveal his deformed, pig-snouted face to the camera.”

With life so seemingly out of step with its usual patterns these days, it’s the perfect time to revisit that middle ground between light and shadow, between things and ideas. If you’re still hungry for spooks after this Halloweekend and looking for some nice eerie Cold War-era commentary, here are our picks for the top five original “Twilight Zone” episodes!

Of course, everyone with even a passing knowledge of this classic ’60s show is well aware of the legendary twist that wraps up this episode. But no matter how far away you see it coming, it still seems almost impossible to keep your skeleton fully contained in your skin the moment William D. Gordon first turns around to reveal his deformed, pig-snouted face to the camera.

Sure, you smell something suspicious right from the start, what with every character’s face conveniently shrouded in shadow or otherwise hidden from the audience’s view, but the simultaneously terrifying and absurd design of their contorted countenances is the perfect visual illustration of the fine line between terror and humor.

It’s utterly ridiculous, almost laughable, but it’s precisely that ridiculousness that makes it so effective and makes the dystopian society’s violent desperation to protect this “ideal image” all the more unnerving. It shows just how easily humanity can resort to the most inhumane defenses to preserve its most trivial constructs.

“A high-speed, high-concept, high-altitude thrill ride, ‘Nightmare at 20,000 Feet’ is a chilling foray into the depths of paranoia and a must-watch for any ‘Twilight Zone’ marathon.”

Airplanes are death traps. Sure, statistics say they’re the safest way to travel and that you’re more likely to die by a meteorite than die in a plane crash. But let’s face it, nobody believes this. And if a statistic is calculated in a research center and nobody believes it, is it really true?

A respectable, rational person might say yes, but I, having transcended rationalism into the far sexier psychological realm of hyper-conspiratorial-nut-job-ism, contest this. Airplanes are death traps whether the facts say so or not. And nothing captures the inescapable terror of air travel quite like “The Twilight Zone’s” “Nightmare at 20,000 Feet.”

Telling the story of a man driven mad by his belief that a gremlin is tearing apart the airplane he’s flying on, this episode is practically a documentary for anyone with a fear of flying.

We all know the feeling. The agony of having to sit still in your seat, knowing that the vehicle you are sitting in could, at any point, hit some unforeseen weather pattern or experience a mechanical malfunction that disrupts the aerodynamic forces keeping it afloat, causing the whole contraption to suddenly begin hurtling unstoppably toward Earth like a giant metal raindrop.

And yet, despite these potential dangers, everyone else on board is sitting calmly by, idly flipping through their “SkyMalls,” completely oblivious to the speculated doom that awaits them. A high-speed, high-concept, high-altitude thrill ride, “Nightmare at 20,000 Feet” is a chilling foray into the depths of paranoia and a must-watch for any “Twilight Zone” marathon.

When it comes to the haunted toys that have reared their smiling, painted wooden heads on “The Twilight Zone,” most people think first of the vengeful Talky Tina from “Living Doll,” likely because of her status as patient zero for the haunted doll trope that has infected the modern horror genre. But when it comes to pernicious playthings, Talky Tina hardly holds a candle to Willie the Puppet.

Of course, the naturally vampiric look of ventriloquist dummies gives Willie a leg up — it’s still hard for me to imagine how anyone at any point in history could think that a little wooden goblin person with slits running down the side of their mouth was somehow amusing.

But “The Twilight Zone” has never been one to rely on purely visual, surface-level thrills to terrify its audiences, and creepy as Willie may look, it’s the episode’s story, which tells of Willie’s usurpation of his puppet master, that makes the lunatic block of lumber so haunting. It’s a cautionary tale of artistic obsession and its parasitic nature, told with just the right balance of creepiness and camp and a perfectly nauseating final sequence that makes it an essential addition to a “Twilight Zone” binge-fest.

“It’s the seductive power of ‘Time Enough At Last’ that ultimately makes it so memorable. You continue to sympathize with Bemis right up until the very end when his glasses break and he is at last forced to face the greater, darker, harsher realities of the world.”

So maybe “Time Enough At Last” isn’t the scariest episode of “The Twilight Zone.” Lacking any man-eating aliens, maniacal machines or possessed people, the episode is relatively tame by the show’s traditionally terrifying standards.

But for info-guzzling hermits like myself — those of us who spend our lives hunched over computer screens, scrolling through “The New Yorker” and “The Atlantic Monthly,” rabidly consuming other people’s thoughts and ideas and opinions so that we can repeat them to our friends later and sound smart — the story of secluded bookworm Henry Bemis, who is overjoyed to find himself the sole survivor of a nuclear apocalypse because it frees him to at last read his precious books without interruptions, is all too relatable.

It’s the seductive power of “Time Enough At Last” that ultimately makes it so memorable. You continue to sympathize with Bemis right up until the very end when his glasses break and he is at last forced to face the greater, darker, harsher realities of the world.

It’s the voice. That soft, slow, ghostly, barely audible moan that scratches through Elva Keene’s telephone in this episode about an old woman, played by Gladys Cooper, who is haunted by recurring phone calls from an unknown source, has continued to haunt my nightmares to this day.

While the story’s resolution ultimately proves to be less intimidating than this throaty timbre might suggest — and, in my opinion, doesn’t do its brilliantly spooky setup justice — there’s still no image quite so terrifying as the look on Cooper’s face each time she receives a new call from this demonic dialer.

The wide, helpless eyes and the mouth limply open is the perfect display of the simultaneous fear and reserve one feels toward death in old age when inevitable demise is at hand, but they still desperately cling to life. The same fear and reserve are also displayed by Cooper in the tamer, more philosophical “Nothing in the Dark” episode, featuring Robert Redford as the slightly less ominous incarnation of death. As haunting as it is heart-stopping, “Night Call” is a slow, eerie portrait of the perils of aging.