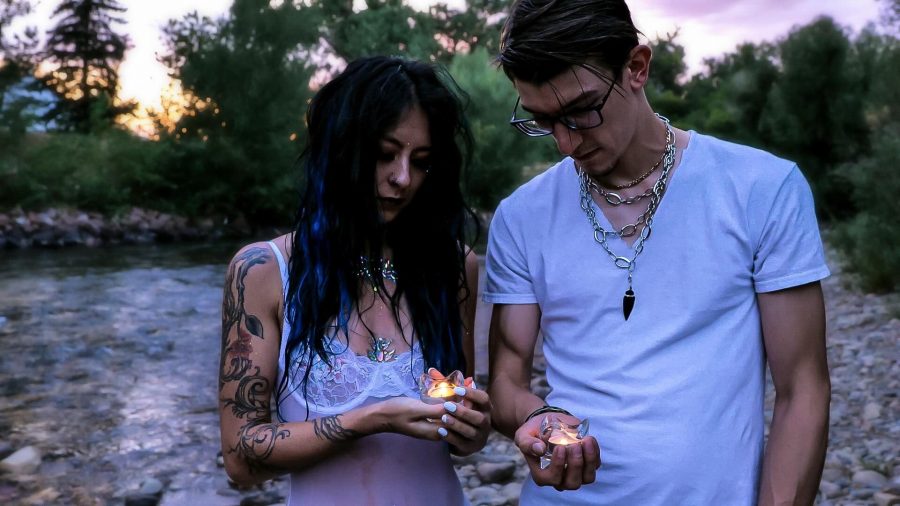 Cheyenne Duba and Steve Welhaf of TARO hold candles in their palms and look at them. (Photo courtesy of TARO)

Cheyenne Duba writes and sings alongside Steve Welhaf’s guitar to create TARO, a Fort Collins-based duo that produces their own music. By combining the deep and emotional lyrics of Duba and the upbeat dubstep production of Welhaf, TARO puts their own twist on electronic dance music.

On Aug. 14, TARO released a music video for their new single “Awake.” This dreamlike video perfectly captures both the emotional and upbeat aspects of the song.

Duba said she wrote “Awake” about a time when she had fallen in love with someone, but once they were together, the relationship turned toxic. She struggled to let go of what she thought was love, despite being unhappy.

“Those moments ended up being an essential part of creating that feeling of being swept away, then fading back to reality.”-Cheyenne Duba, TARO singer and songwriter

“I hope this inspires people to love themselves enough to leave an unhealthy relationship instead of chasing what it once was or what it is during its ‘good’ moments,” Duba wrote in an email to The Collegian. “It’s really hard to leave someone you love even though you know they aren’t good for you, but you have no idea how much better your life can and will be until you do it. You just have to trust that.”

This emotional aspect is captured in the video with individual shots of Duba walking alone in the woods with flowers and colorful smoke. There is also a shot with both Duba and Welhaf holding candles by the river, creating a heartfelt moment that goes along seamlessly with the lyrics.

The music video was filmed by Nate Block, who has been the duo’s “go-to guy” for anything film and photo related. Block is the owner of Blocklisted Media, a Colorado-based media company that offers services like video production, photography and more.

A big part of what makes this video so unique is the geometric patterns and the kaleidoscope effects. This element mimics the idea of a live show, especially since visuals are such a huge aspect of live electronic dance music.

“It flowed perfectly with the colored smoke and our various surroundings in nature,” Duba wrote. “Those moments ended up being an essential part of creating that feeling of being swept away, then fading back to reality.”

The scenery in this music video is gorgeous and adds to the overall ethereal mood of the song. It was filmed in Vedauwoo, Wyoming, and along the Cache la Poudre River.

Filming in nature was very exciting for the duo, they said, both because of the beautiful shots they were able to get and because of the wild adventures they encountered during the process.

“We were filming in a free range area and encountered a group of cows,” Welhaf wrote. “We had the perfect opportunity with lighting for this one spot in a field, but they wouldn’t move. Nate tried to scare them away with the smoke sticks, but they didn’t care and actually started coming towards us. We were definitely afraid for a bit and they pretty much backed us into our car.”

Duba’s favorite part of filming was also the cow encounter, but she said she also loved getting dressed up and “sparkly” for the music video.

“I miss dressing up to go to festivals/shows and this really helped me fulfill my need to be extra,” Duba wrote.

The “Awake” video definitely expresses many of the EDM festival elements people miss so much. With the colorful smoke, geometric edits and dancing in the woods, this music video will transport you into a different reality.