Pride Center is place of affirmation, community on campus 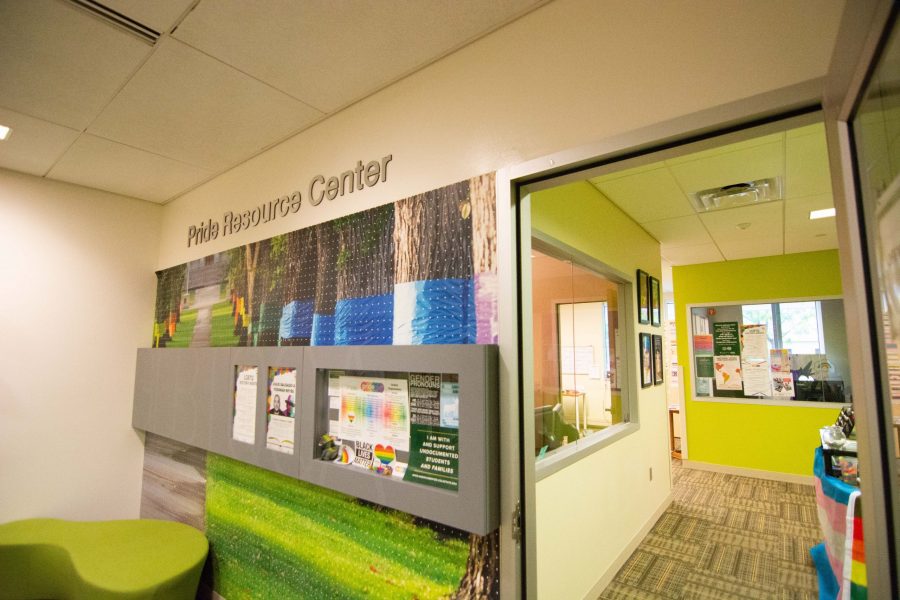 The Pride Resource Center is located in room 232 and provides resources and support for all CSU community members to explore and increase their understanding of sexual/romantic orientation, gender, and identity intersection. This year is the 20th anniversary of the center. (Colin Shepherd | Collegian)

Comfortably located in the northeast corner of the Lory Student Center sits Colorado State University’s Pride Resource Center. From its initial creation in 1997, the center has served the LGBTQ+ community for 23 years, celebrating 20 years of support in 2017.

For those who have not had the opportunity to stop in, the center is a place of inclusion, validation and affirmation. It is committed to offering a safe space where the CSU community can educate each other about gender expression, gender identities, sexuality and romantic orientation at an institution that is typically heteronormative.

“When I go in there, I’m instantly surrounded by ‘my people,'” said Hannah Kramer, president of the Bi, Ace, Aro, Pan, Poly, Queer and Questioning organization. “In my everyday life, I honestly don’t feel that I’m very ‘seen’ as a person — I feel invisible most of the time. But when I’m at the Pride Center, I’m completely a real person whom others will listen and talk to.”

we don’t look at LGBTQ students through one singular lens; we understand that there’s financial backgrounds, that there are racial backgrounds — especially right now — that are really affecting the ways that we navigate a place like CSU.”-Pedro Ramos, Pride Center program coordinator

The shared area offers many unique benefits to their community such as gender-affirming garments like binders for those who would like to be present within their own body. The center also fosters a multitude of organizations like BAPPQ, OSTEM, Queer Women Engaging in an Encompassing Nexus, Graduate QTS and Prism for students looking for support in their sexualities, identities and more.

Kramer also shared that her favorite part of the center was a mason jar. This jar had a coin added to it each time a student made a deprecating comment towards themselves.

“It worked so, so well, and I loved doing it,” Kramer said. “People started recognizing behaviors that they had previously been doing subconsciously so they could put the effort to stop it in, and people weren’t afraid to call out others if they were being negative towards themselves.”

The Pride Center was initially created by students and has since added some leadership positions to support CSU’s LGBTQ+ community. One of the newer members, Pedro Ramos began working as the center’s first program coordinator starting in July.

“I think my big focus now is really focusing on how do we incorporate different racial identities into the conversations around gender and sexuality because I think sometimes that’s the missing piece,” Ramos said.

“I do, however, want to acknowledge that my whiteness does afford me a level of comfortability within the center and that the center still needs to work toward creating an environment where queer Black people, Indigenous people and people of color can fully thrive,” Powers said.

Ramos said the Pride Center has quite a few resources for those in need during COVID-19 and other tough times. They offer an emergency scholarship called the Leah Memorial Fund, which is intended for those who may have financial trouble due to coming out or other discriminatory factors. Anyone within CSU’s LGBTQ+ community can apply.

“We don’t look at LGBTQ students through one singular lens; we understand that there’s financial backgrounds, that there are racial backgrounds — especially right now — that are really affecting the ways that we navigate a place like CSU,” Ramos said.

The center recently created multicultural counseling hours for those who may not be able to come into the center for emotional support due to situations at home or COVID-19-related factors.

Despite the difficult times, the Pride Center is standing out as an example for its community and the rest of the CSU student body through the history it has made and the progression it continues to make.

Bella Johnson can be reached at entertainment@collegian.com or on Twitter @bellakj2020.