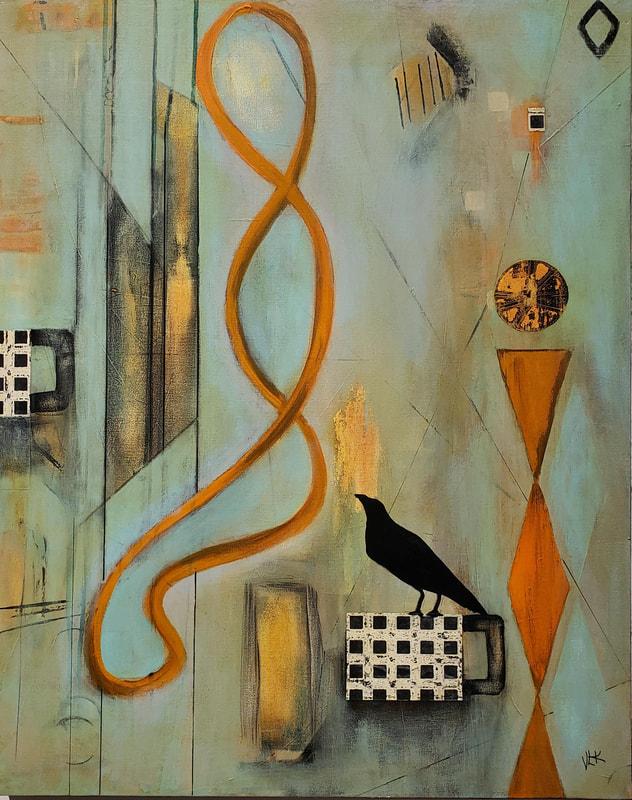 With an abstract mind to reflect her art, Victoria Kempf sheds light on her dynamic paintings’ inner workings.

Kempf, originally from Pittsburgh, came to Colorado for her job, an Episcopal priest, and has been here with her husband, Joe, for 20 years. She is one of Fort Collins’ very own local artists and posts her art to her Instagram @victoriakempf1 as well as to her website, vlkarts.com.

Kempf said she was once a “word person,” but got tired of writing and transitioned to visual arts only 12 years ago, after a friend introduced her to scrapbooking.

“While painting, Kempf likes to talk to her pieces, asking them what they need and allowing them to evolve on their own. There are usually two or three pieces underneath these paintings that she didn’t like and painted over to start fresh.”

“I was more interested in decorating a page and placing colors and all that than I was in the pictures,” Kempf said.

After making one of her first collages in a creativity exercise with a women’s group, scrapbooking turned into collaging, starting the snowball effect. She then expanded her interest into abstract painting and conjoined the two techniques.

When asked about why she chose abstract painting, Kempf was brutally honest.

“Well, I couldn’t draw, so it just made sense — just shapes and colors,” Kempf said.

When starting a new piece, Kempf said she stares at a blank canvas for about three days and lets her feelings take the wheel. Unless it’s a color idea, she doesn’t go into a painting knowing what she’s going to paint.

“That’s a guarantee I won’t paint it right,” Kempf said.

While painting, Kempf likes to talk to her pieces, asking them what they need and allowing them to evolve on their own. There are usually two or three pieces underneath these paintings that she didn’t like and painted over to start fresh.

“I go in and say, ‘let’s see where the paint goes and where it takes me,’” Kempf said.

However, Kempf sometimes disagrees with what a piece asks of her. She said she received an unusual request from the piece she is currently working on.

“It said to me, ‘a dead bird,’ and I said ‘hell no,'” Kempf said. “I’m not putting a dead bird at the bottom of this painting; think of something else.”

Kempf started off the year excited to present her works in multiple shows she had planned. However, COVID-19 had other plans, canceling two of her shows. Because of the canceled shows, her pieces are now piling up in her home, covering every square inch.

Much like the rest of the population, Kempf said she’s in a dull state of mind due to quarantine.

“I’ve got all month, why should I paint today?” Kempf said. “A lot of people are cleaning their house, they’re getting rid of things, they’re doing all these wonderful things in the house, and other people are just sitting there.”

Nevertheless, she has goals and plans for 2021. Kempf said she wants to have a private show to share her art. While she currently has a show planned for next summer, 2021 is so up in the air that she doesn’t know what could happen.

“It would be nice to get into a gallery someday,” Kempf said. “I got all this stuff sitting around, and I really would like to be able to share it with people.”

Visit her website, vlkarts.com, to shop and learn more about Kempf and her artwork.