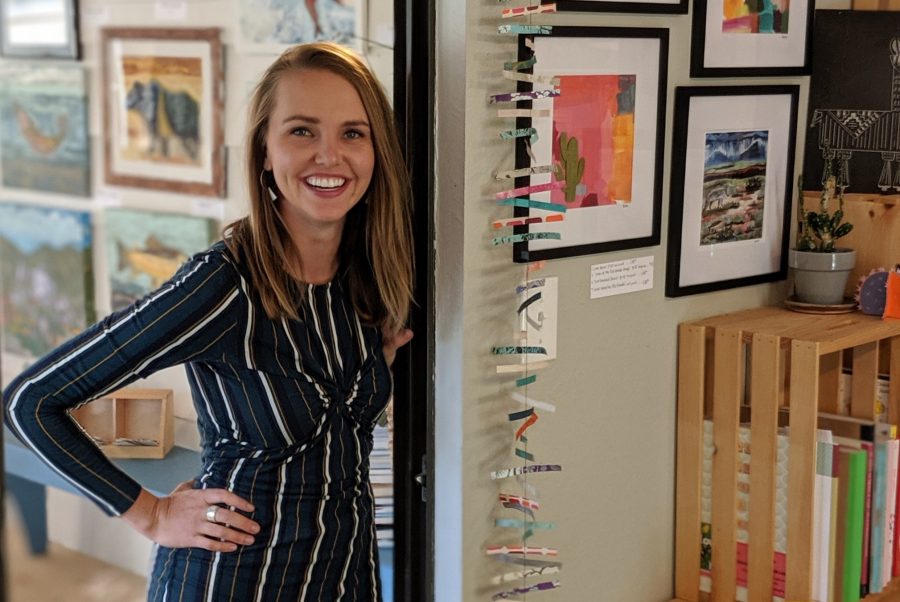 Fort Collins artist Kaley Alie continues to pursue what she loves without care for formality or perfection.

Kaley began painting at a young age, even before she began kindergarten, according to her mother, Kim Alie. When Steve and Kim Alie couldn’t afford many toys for their children, they introduced painting and other crafts to them so they would spend their time creating rather than playing.

Kaley, along with her siblings, painted everything not just on paper, but on the walls of their house, the furniture of their rooms and even rocks. Even as a toddler, Kaley immediately took to art.

That passion would continue to grow throughout elementary and high school, as she would take more art classes and focus more on painting. Kaley even said she didn’t begin painting on canvas until she was in high school. Despite her numerous classes, Kaley still considers herself a self-taught artist because of her continued drive to experiment throughout this time.

Kaley enrolled in Colorado State University’s fine arts program but would switch majors to natural resources, recreation and tourism after being discouraged from pursuing a career in art. Kaley says people began discouraging her to pursue art because they saw no financial gain from it, as well as being put off by the perfectionist mentality of her art classes. From then on, Kaley decided that painting would be just a hobby while she pursued a more financially rewarding career.

“People said, ‘Well, what are you going to do with art?’ (and) ‘You can’t make it as an artist’ so after hearing that in college, I decided to change my major … and I decided it would just be a hobby,” Kaley said.

After college, Kaley worked as a waitress before working her way up to restaurant management, then to event planning and marketing. Despite the security and benefits her career brought, Kaley found herself feeling like she wasn’t doing the right thing. With a desire to pursue art and the entrepreneurial spirit instilled in her by her parents, Kaley would try her hand at painting as a career by selling at a small maker’s market in late 2017.

Taking early morning walks to a special little spot in my neighborhood where I can hear the Red Winged Blackbirds sing. Feeling nature come back to life after winter reminds me that brighter days are ahead.

Kaley decided in the spring of 2018 to pursue painting as her career after loving the experience of selling her work. Without a loan to help kick-start her passion, Kaley left her previous job and started working on a farm part-time so that she could start focusing on painting more and designing products.

My intention behind creating art is I like it to make people smile, I like people to look at it and create a sense of happiness” -Kaley Alie

Two years later, her business boasted accomplishments, such as being featured in over 75 greeting card designs, in addition to her prints, and now being in 15 retailers across the United States and Canada, such as Ginger and Baker, Wolverine Farm Letterpress & Publick House and Magpies Boutique & Studio.

“People have been loving it so much that we actually just bought a card display because we have more and more (cards),” said Pascale Geniaux, market manager at Ginger and Baker.

Kaley’s work is distinguished by its broad brushstrokes, vibrant colors and heavy use of acrylic paint, creating images that are light on detail but highly expressive and reminiscent of impressionism. What some might call simple, others might call joyous.

“My intention behind creating art is I like it to make people smile, I like people to look at it and create a sense of happiness, and if I’m being really rigid with art and following a lot rules, it doesn’t feel approachable so I just want it to be loose, happy and playful,” Kaley said.

Unlike a lot of artists, Kaley creates her art with what she calls “deliberate imperfections,” which is to say she doesn’t focus on making sure her paintings look conventionally perfect. She’s okay if lines aren’t straight or proportions aren’t exact and even finds that imperfection beautiful. Instead, she chooses to focus on the expression of the painting instead of what others would consider mistakes.

“There’s a quote by Andy Warhol that I keep pinned in my studio that is sort of my philosophy and keeps me true to myself; ‘Don’t even think about making art, just get it done. Let everyone else decide if it’s good or bad, whether they love it or hate it. While they are deciding, make more art,’” Kaley said.

Despite her art education, Kaley describes herself as a self-taught artist due to her experimentation and defiance of conventional teachings. A lot of her journey to create a style consisted of experimenting with different mediums and finding her signature style. She tried using cutouts and mixing paint types to try honing in on what her style was going to be. But what she found most helpful in defining what her artistic style was was determining what her style was not. When she enrolled in the art program at CSU, she found one her first drawing classes to be the hardest classes she’d ever taken, almost failing.

“It was because I couldn’t use color, I had to be really precise,” Kaley said. “We were aiming for realism and it was so not me.”

It was through this that she learned she preferred a messier approach to art that allowed for the freedom of imperfections, uneven proportions, vibrant colors and bold brush strokes. Though it may be imperfect, it is what allows her to express herself joyously.