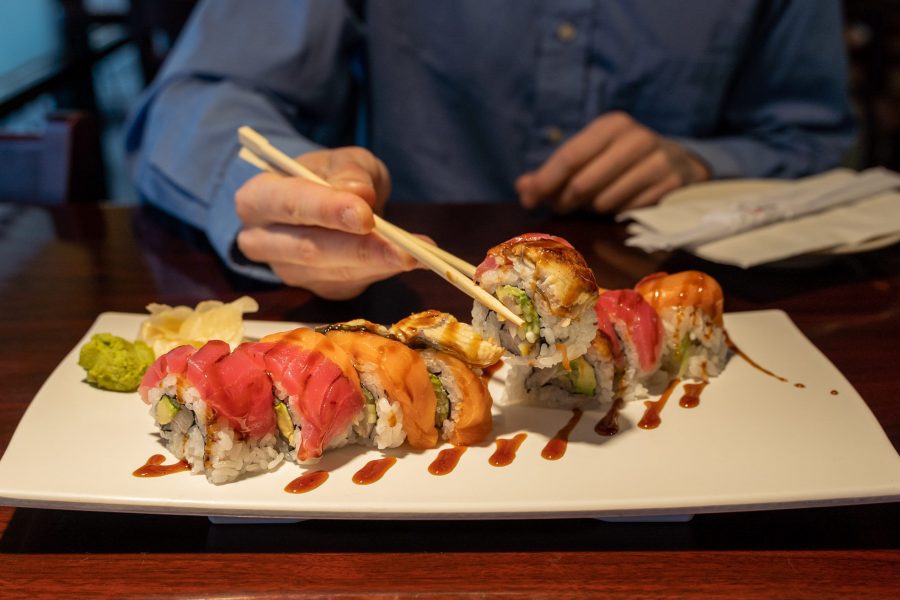 A sushi roll at Mi Sushi on Prospect. (Brooke Buchan | The Collegian)

Apart from a 10-foot-high red velvet cake exploding with fireworks and topped with a life-sized fondant tiger, there is perhaps no food more colorful or more awe-inspiring than sushi.

With its rainbow-colored fish cutlets, chromatic veggies and vibrant toppings, it is truly the Boy George of Asian cuisine. If you’re looking for a nice tasty blast of color to lift your spirits while waiting for spring to spring, here are some of the best sushi rolls in Fort Collins!

I suppose it’s no surprise that the Scotty-O-Roll would come in at number one, considering the awe that naturally exudes from all entities — culinary and humanoid alike — with so radiant a name.

Scotties have serenaded us with songs about water tower towns, have stunned with gravity-defying basketball dunks and are the only dog breed that effectively doubles as both man’s best friend and a fully functional floor mop.

Without Scotties, how would we know where to find the best sushi within biking distance of the Colorado State University Fort Collins campus? We wouldn’t. We would have to use TripAdvisor like tourists.

It’s about time Scotties start getting the recognition they deserve, and so it is my great honor and privilege, as a proud member of the Scotty clan, to bestow Jaws’ savory Scotty-O tuna roll with the top spot on this list.

Scotty-skewed biases aside though (as a journalist, I would never let my personal opinions influence my objective, wholly factual ranking of Fort Collins’ local eateries), the Scotty-O-Roll truly lives up to its name — offering a uniquely savory flavor with a slightly greasy texture and cheesy undertones.

The roll, which consists of spicy tuna, jalapeño and cucumber rolled in white rice and topped with smoked salmon and dynamite sauce, is a deliciously salty, warm diversion from the otherwise chilled, sweet, vinegary flavor of more popular rolls such as California, Philadelphia or Caterpillar.

The dynamite sauce is the real kicker here though. It’s a teriyaki base mixed with eel sauce and mayo that is heated with the salmon, giving it a crusty, smoky, bubbly finish like melted cheese. It may sound like an odd topping for sushi, but when combined with the other rich, oily flavors present in the roll, it makes for a perfect topping to the perfectly named dish.

The roll … is a deliciously salty, warm diversion from the otherwise chilled, sweet, vinegary flavor of more popular rolls such as California, Philadelphia or Caterpillar.”
2. Sushi JeJu – Hi Stroll Roll

There’s a very distinct zing to Sushi JeJu’s Hi Stroll Roll. It’s smoky — a word that I feel I have used at least 17 times in this article thus far and that makes me wonder if perhaps I should work on broadening my arsenal of food-related adjectives — but it’s a different kind of smoky than the Scotty-O-Roll. It’s a much tangier, zestier breed of smokiness.

Rather than the flavor sinking inward into the roll, slowly revealing itself in increments as one’s teeth make their journey through the rice, nori and filling, the Hi-Stroll Roll blasts its tangy flavor outward like rock music out of a boombox.

This is thanks in large part to the delectable, tender, chewy seared tuna that forms the topping, giving the dish a distinctly jerky-like tinge, which is only heightened by the sharpness of the sweet onion sauce drizzled over top — providing a bit of bite to the sweet tuna and further enhancing its rich (dare I say) smoky flavors.

This powerful, eccentric opening act, however, is soon balanced out by the cool, collected flavors lodged in the roll’s center, which include spicy lobster, cucumber and garlic butter. These ingredients offer a softer, more chill array of textures, bound together by the garlic butter’s light and icy fat.

If one is in the mood for something a bit heavier and heartier, the restaurant’s Fort Collins Roll (made with tempura calamari, spicy mayo and topped with seared salmon, masago mayo and eel sauce) is an equally delicious local delicacy.

Rather than the flavor sinking inward into the roll, slowly revealing itself in increments as one’s teeth make their journey through the rice, nori and filling, the Hi-Stroll Roll blasts its tangy flavor outward like rock music out of a boombox.”
3. White Tree Sushi – Carnival Roll

I’ve admittedly always been a bit trepidatious about eating fish eggs. I blame the opening scene of “Finding Nemo.” Whenever I’m presented with an opportunity to indulge in some nice, fancy caviar, all I can think of is Marlin the clownfish weeping over the empty cavern that once contained the eggs with his offspring.

That being said, after trying the caviar-topped Carnival Roll at White Tree, I’m beginning to sympathize with the barracuda. Nemo’s brothers and sisters are delicious.

While the roll as a whole is quite tasty, albeit simple — spicy tuna and cucumber on the inside with a rainbow of flying fish eggs over top — the eggs are what make it something truly special, adding a nice, light pop to each bite and giving the dish an airy and bubbly texture that helps to balance out the sticky sweetness of the rice.

The eggs also provide a nice, minimalist, chromatic look to the top, adding color to the roll without smothering it in piles of thick, frilly garnish. It has a pleasant, simple, Mondrian-esque look to it that’s perfect for the minimalist sushi connoisseur.

You know a roll of sushi is going to be good when it looks like something your brain might conjure up while you’re tripping on LSD. Not that I’ve ever done LSD. But I have seen Disney’s “Alice in Wonderland” at least 174 times, and I have it on good authority that the two experiences are essentially the same.

All that to say the TUSY Roll at Mi Sushi is simply divine, which is to say it bears a striking and uncanny resemblance to Divine, the famous drag queen and star of 1972’s “Pink Flamingos.” With its neon orange top, bright pink center and spicy personality, the two are mirror images of one another.

But the TUSY Roll’s beauty goes beyond mere appearances. Under its shimmering, hallucinogenic veneer is a tasty, tender, diverse and flavorful combination of yellowtail, avocado, cucumber, tuna, salmon, eel and eel sauce — all just as daring and dangerous as their eccentric packaging.

For those of you who are just sick of these gosh darn kids and their newfangled, punk-*ss “specialty rolls” with hotshot flavor combinations ruining the good ol’ fashioned sushi you had back in your day, there’s the Rocky Mountain Roll at Lu Lu Bistro.

It’s a simple California roll (avocado, cucumber and imitation crab meat) topped with salmon, spicy crab and eel sauce — nothing too counter-cultural. It’s the kind of sushi roll that still proudly and patriotically recites the Pledge of Allegiance every morning.

But this roll is made for more than just the boomers who think that turpentine is a suitable cure for cancer. It may be simple, but it’s perfectly made — a roll that doesn’t need cheap tricks and thrills to prove its value.

Here, basic shouldn’t be mistaken for boring. Though it doesn’t explode your senses with loud, flavorful, I-hate-my-parents passion that other rolls do, it perfectly and tastily delivers precisely what is expected of it.

The rice is well-cooked; the ingredients are fresh, tender and have just the right balance of fleshiness and elasticity; and the presentation is superb, with each piece cleanly holding its shape — a must for sushi, which is traditionally designed to be just as pleasing to the eye as the taste buds. So while Lu Lu may not be the most stylish entry, it soars in the technical category.