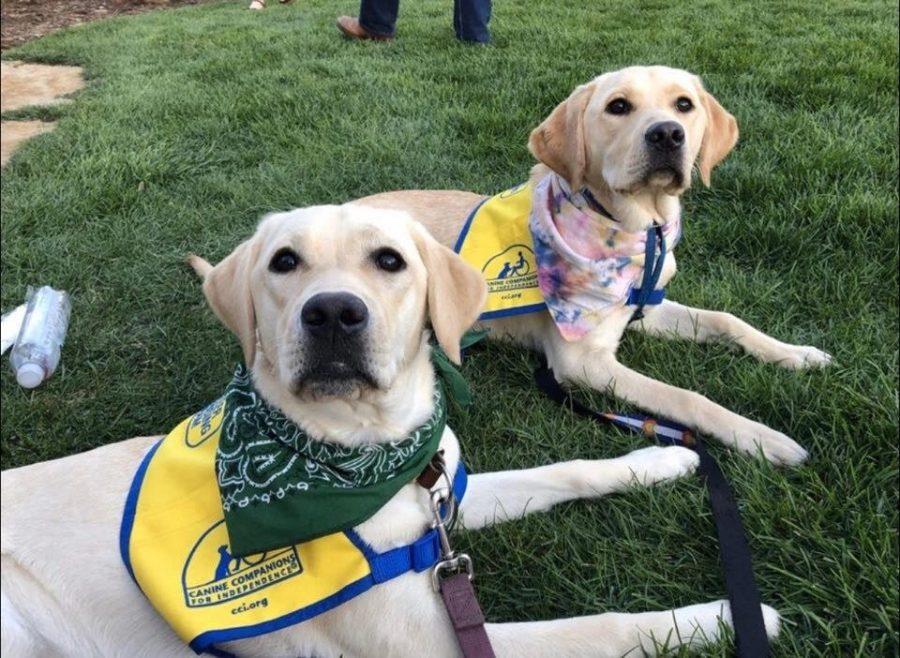 Collar Scholars is a group at Colorado State University that raises puppies for Canine Companions for Independence, a nonprofit organization that provides assistant dogs at no charge. (Photo courtesy of Collar Scholars)

Puppers and doggos are more than just cuddly creatures to play with or train to do intense parkour tricks. For the Colorado State University Collar Scholars program, these canines are trained to help people with disabilities.

“Canine Companions for Independence is a nonprofit organization thats mission is to breed, raise, train and place assistance dogs with their recipients free of charge,” said Lauren Thomason, the 2019-20 Collar Scholars president. “These dogs, at the end of their training, are valued between $50,000 to upwards of $70,000, and that is a lot of money. What really sets Canine Companions apart is that they place these dogs free of charge with the people they go to. That’s thanks to all the donors that donate money to the organization, as well as the puppy raisers that put in their time and invest financially in the dog they’re raising over a year and a half.”

Canine Companions for Independence, founded in 1975, breeds three types of dogs, including golden retrievers, labs, and crosses between the two.

The dogs are matched with five different types of support levels for people with disabilities: service dogs for adults, skilled companions that work with children or adults under the guidance of a facilitator, hearing dogs, PTSD trained dogs for veterans and facility dogs that work in medical facilities, courts and police stations.

The national organization has six regions and places CSU within its southwest section. However, it’s not a common club for colleges to take part in — something that Collar Scholars hopes to change by inspiring other institutions to do the same.

“Pretty few universities have this program; our club was one of the first to kinda start this,” said Sydney Carrico, a 2019-20 officer for the club. “We actually started a Facebook group called ‘College Raisers’ that’s starting to grow as a community. A couple of our officers just wrote a ‘How to Start a Club’ handbook on campus for other raisers because usually raisers have been in the past middle-aged — it’s not really a college-aged thing. We’re one of the first college programs that’s really taken off.”

Currently, the CSU chapter is raising 12 dogs, with groups of puppy sitters to help support the puppy raisers when dogs aren’t permitted in class. General members of the club partake in elections, fundraisers and puppy love.

You can’t often give the gift of independence to someone, and so I’d say it’s a club of people who want to make a difference in someone’s life.” -Lauren Thomason, president of Collar Scholars.

“You get to see all their growth with you because you’re the ones that raise them and teach them and do all this stuff,” Carrico said. “It’s really cool to watch them grow from a crazy 8-week-old puppy that’s biting your hand and jumping on furniture to this dog that could literally be pulling a wheelchair or something like that. It’s awesome to see the growth. … When Zoe was younger, bringing her on campus, people would be stressed or something and start talking to her and pet her, and I’d be like, ‘Wow, she’s impacting lives right here, even in training.’ You just get to recognize how special of animals they are and the differences they can make in people’s lives.”

The bond between humans and animals is clear when watching the puppies with their handlers. Given clear commands, rewarded with treats, visited in the home and checked for hygiene, the dogs are well taken care of. Through this trust, the dogs’ growth is outstanding over the course of a year and a half.

“With my puppy Zeb, seeing his struggles and later looking back on how far he’s come is so heartwarming,” said Jennifer Smith, another puppy raiser and one of the 2019-20 officers. “Walking on campus and he doesn’t care about anything. You’re just like, ‘Oh my gosh, you’ve come so far!'”

But it isn’t just the animals that benefit from this relationship. Club members also share in the companionship, joining each other for fundraising events, community outings and friendships. Most recently, the club hosted a puppy kissing booth for Valentine’s Day, raising funds for the program.

“A common saying we have in Canine for Companions is ‘We come for the puppies, but we stay for the people,’ which really ties into a lot of people,” Thomason said. “They’re drawn in by the dogs. They want to get involved. They want to raise one — and throughout this process, they get to meet more people that are raising. They get to meet the graduate team (the people who receive the dogs once they are full service dogs). And you realize the impact you can make, how fulfilling and fun it is to get to be involved in such a transformative process. You can’t often give the gift of independence to someone, and so I’d say it’s a club of people who want to make a difference in someone’s life.”

General meetings for Collar Scholars typically include topics such as what the service training looks like, what trainers do on a day-to-day basis, dog grooming and all kinds of conversations relating to the work they do. For training classes, the organization brings in a trainer to lead training classes.

“It’s also a great opportunity for the dogs to have to work on things with other dogs in close proximity because that can sometimes present a new challenge,” Thomason said. “We’ll also have various activities or fundraisers throughout the semester.”

Collar Scholars can be contacted through their Instagram page @collar_scholars_csu or through their Facebook page, which they update regularly with information.

“Come and check it out,” Thomason said. “We probably have a place for anyone in the sense of we want the different views and perspectives. We want what you could add to our club, what you could add to help get us further in our mission. You’ll have fun! It’s always a bonus that you’ll then get to hang out with a bunch of puppies, and you’ll probably leave realizing that there might be something really cool you could be a part of.”

Autumn Sorrentino can be reached at entertainment@collegian.com or on Twitter @ItsnotTarantino.