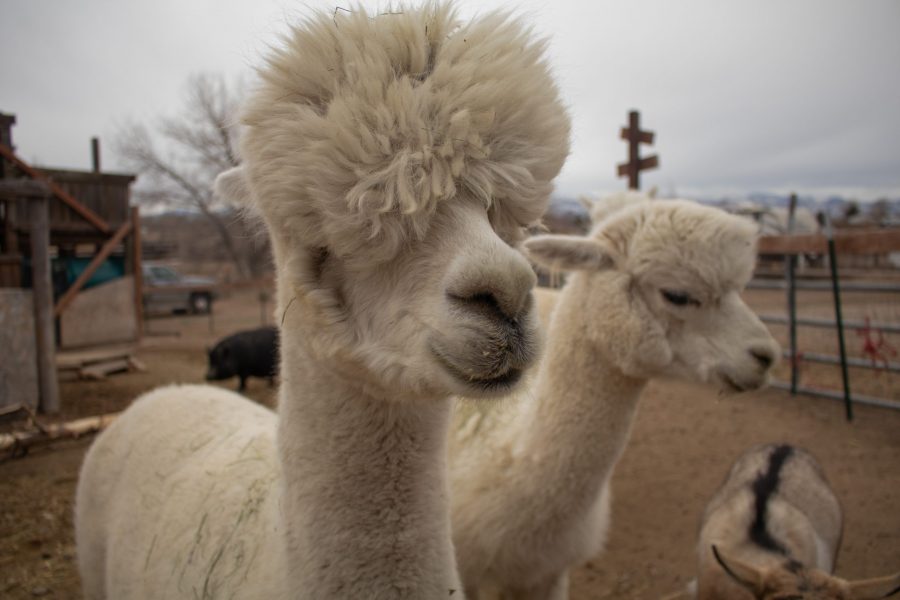 The Rescued Friends Animal Sanctuary provides a second chance for many types of animals, Jan. 27. (Addie Kuettner | The Collegian)

An overly protective rooster, a goat who jumps on you to get your attention and a cat who isn’t afraid to climb you for affection: These are just some of the personalities you’ll find at Rescued Friends Animal Sanctuary.

In Northern Fort Collins, there is a place where animals are given a second chance, where the animals waste no time coming up to you and seeking all the affection you could possibly give them. But unlike most animal sanctuaries, you won’t find cats and dogs lazing about. You will find groups of chickens, alpacas, pigs and herds of goats that go wherever their strange fascinations take them.

A lot of people, when they hear about an animal sanctuary, probably think about cats and dogs but not farm animals, which Smith and Bortz say is exactly the point.

Rescued Friends was started by Amy Smith and Von Bortz in 2017. The two had met online in 2014 and were both immediately drawn to each other’s love of animals and health.

Both had fostered a love of animals from a young age. Bortz said that there were always dogs in his house ever since he was 2 years old. Smith says she first began playing with stuffed animals before moving onto caring for cats.

While both loved animals from a young age, it wasn’t until their adolescent years that the two became serious about pursuing their love of animals as a lifestyle. For Bortz, he distinctly remembers hearing the song “No More” by the punk band Youth of Today, which argued that the consumption of animals is immoral, as the moment when he decided to go vegan in support of animals.

For Smith, the choice to go vegetarian and ultimately vegan came after reading the book “Animal Liberation: A New Ethics for Our Treatment of Animals” by Peter Singer.

“If you’re petting your dog and eating a burger, there’s something wrong with that, and people need to start making that connection,” Bortz said.

Before opening Rescued Friends, Bortz and Smith both worked as massage therapists while also spending their time volunteering for animal sanctuaries. In addition to both having volunteered for sanctuaries in the past, Smith gained experience taking care of animals from pet sitting, and Bortz cited his experience working on a farm as a teenager.

The way I view it, cats and dogs have all the luck, they’re lucky. We need to give some of that luck to farm animals because they’re the ones who have no voice and are some of the most abused creatures on the planet.” -Von Bortz, Founder of Rescued Friends Animal Sanctuary.

“It’s always been a dream to have an animal sanctuary, but I never thought it would happen,” Smith said.

After visiting another animal sanctuary, Broken Shovels in Henderson, Colorado, and speaking with the owner, the two began to seriously consider opening a sanctuary of their own. Bortz immediately began to look for a property before finding their current location. Before they could open, however, there was a lot of work to be done on the former equestrian center.

“I purchased this property in October of 2016, and it was terrible (and) was in dire need of repairs,” Bortz said. “But I saw the potential in it, and it took us eight months of working every day to get it ready, and we took our first residents in June of 2017.”

In addition, time had to be spent learning to care for many of the animals they would take, but they quickly learned thanks to the help of others in the community.

A lot of people, when they hear about an animal sanctuary, probably think about cats and dogs but not farm animals, which Smith and Bortz say is exactly the point. According to The Humane Society of the United States, livestock abuse is among the most reported cases of animal abuse alongside cats, dogs and horses. The Humane Society particularly notes its prevalence in the factory farm industry due to a common lack of legal protection afforded to livestock.

As an example of some of the unique challenges a farm animal sanctuary faces, Smith recalled a rescue they underwent in which a chicken farm had gone bankrupt and abandoned thousands of chickens.

“It was January of last year when it was like 10 below for a week straight, and they were all freezing to death,” Smith said. “We went in there and saw literally thousands of 3-week-old baby chicks dying on the ground, and we had to decide which ones to take.”

Smith goes on to say that people often don’t see these animals as worthy of rescue like they do animals such as cats and dogs.

“The way I view it, cats and dogs have all the luck,” Bortz said. “They’re lucky. We need to give some of that luck to farm animals because they’re the ones who have no voice and are some of the most abused creatures on the planet.”

Smith and Bortz say that one of the most common situations they encounter is people giving up their backyard chickens after they stop producing eggs or realizing they bought a rooster by mistake. Smith says they receive over 100 calls a year regarding roosters and backyard chickens. A rise in backyard chicken farming has meant a rise in abandoned or forsaken chickens and roosters in several cities in the U.S.

“After (chickens are) potbelly pigs,” Smith says. “People think they’re getting these mini, nano, tea-cup pigs when there’s no such thing. Then they grow to a normal pig size, like they’re supposed to, then people can’t handle them anymore, and they don’t want them anymore.”

As part of their education mission, Rescued Friends attended three summer camp programs to educate kids on animals. Each year they have an Earth Day booth. They said they will be attending NewWestFest this summer, as well as the Fort Collins Peach Festival next year. In addition, Smith recently received her certification in plant-based nutrition and says the next big step for the sanctuary will be hosting educational classes on plant-based diets.