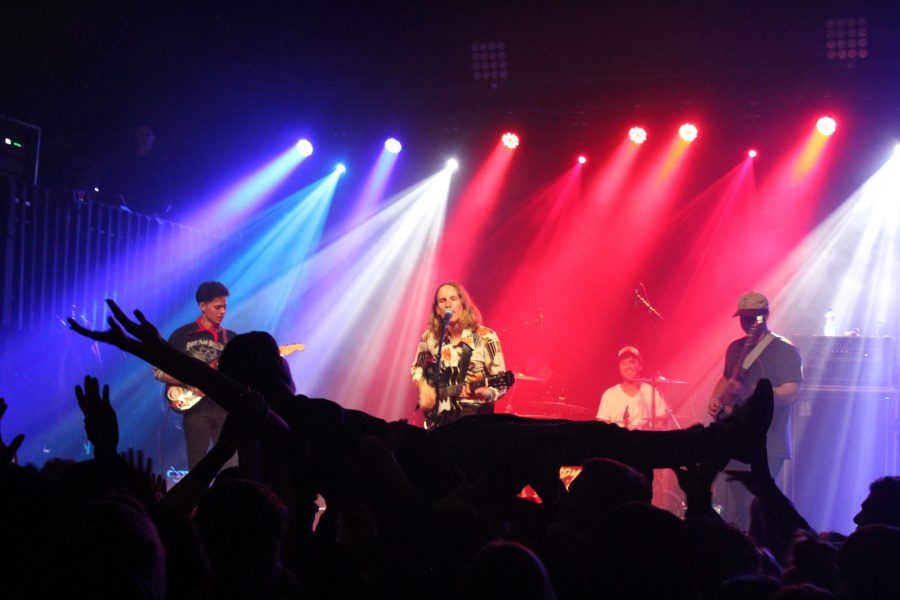 Just as February rolls around, Lady Denim spreads the love through the Aggie Theatre following local openers The Red Scare and HoldFast., captivating their audience in a show unlike any other.

The Fort Collins based band released their first single, “Pipe Dream,” in January 2019. A little over a year later, people are singing Lady Denim’s songs back to them. As they played a song not yet released, lead vocalist Nick Lundeen joked with the audience that he was “a little upset you … aren’t singing the words back.”

Lady Denim’s sound is akin to that of The 1975 with hints of John Mayer and a bit of rock n’ roll edge to it. No matter the inspirations though, their music and sound are uniquely their own.

Starting with their popular, relatable hit “Cherry Limeade,” the audience rocked to the beat of the band’s drums that were designed with a light-up Lady Denim logo. It set the vibe of the show, the notes almost speaking to the audience and saying, “Hey, you’re in college, so chill out and have fun!”

The audience screamed for an encore as the band teased they were on their last song of the night. They disappeared and reappeared with their first single, “Pipe Dream.” The beginning starts with a slow guitar riff that quite literally feels like you’re transported into a dream.

Their last song and arguably the most anticipated of the night was their latest release, “Sweaty T-Shirts.” This song has a slightly different sound than their other tracks, and it got the crowd overwhelmed with excitement and consumed by its sound. The lyrics “I know that it’s getting late, but for the moment, let us slip away from the crowded room where we first locked eyes” tells the story of so many college relationships.

Although the band is fairly new, their audience and fan base feels old. They show up in denim, sing the lyrics, surf the crowd and buy their merchandise afterward. When the show is over, the band members filter into the crowd, talking to the audience and taking pictures as if everyone in the room is an old friend.

At the end of the show, Lundeen said what he wanted everyone to take away from the show was to spread positivity.

“Spread love, call up old friends and educate yourself on other people’s beliefs,” Lundeen said.

Lady Denim has a magical way of keeping the audience engaged, and they use that for good, singing about things that are relatable to college students and spreading messages of love and acceptance.

Katrina Leibee can be reached at entertainment@collegian.com or on Twitter @KatrinaLeibee.