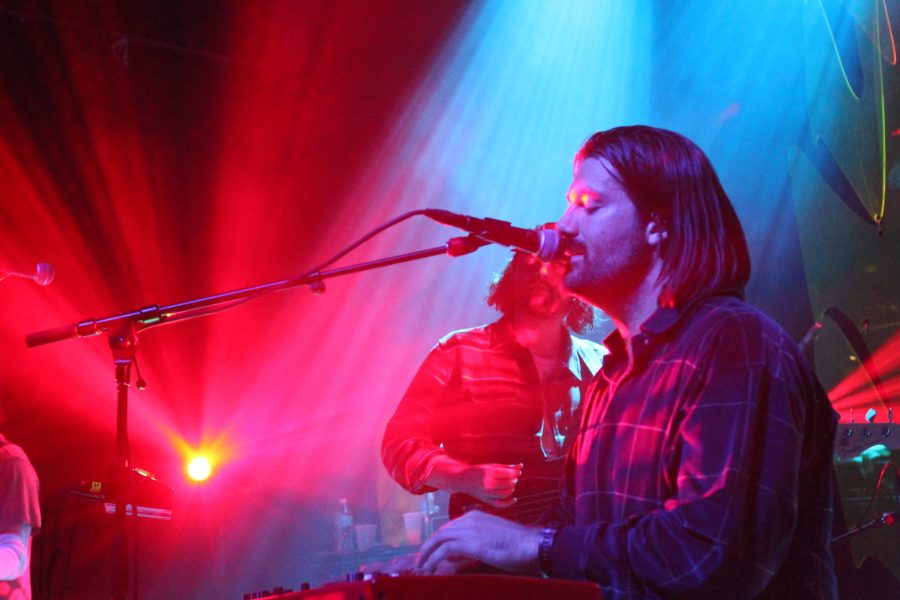 Vocalist Austin Getz of Turnover sings and plays keyboard during the band's set at the Gothic Theatre in Denver Dec. 4. (Megan McGregor | The Collegian)

Earlier this year, Turnover graced the stage of the Gothic Theatre with the Portland-based synth-pop band Reptaliens and hardcore heavyweights Turnstile, whose shows tend to be loud, energetic and chaotic. On Dec. 4, Turnover brought a different vibe with a diverse lineup and a fluttering zeal.

Touring on the release of their latest record “Altogether,” the veteran pop-punkers turned dream-pop titans were greeted with a similar crowd that has always been present at their shows, as well as a new wave of fans who seemed to have taken to Turnover’s new aesthetic very kindly.

“This is my first time seeing Turnover; I’m super stoked, and I cannot wait,” said Roy Patton, a Turnover fan. The night was Patton’s first show in Colorado, and he was accompanied by Sean Michaels, who was present for Turnover’s headlining show at the Gothic in April.

“I’m actually excited for the new vibe,” Michaels said. “Last time Turnstile played, and (Turnover) was quite the calm-down after that.”

Turnover’s sound has always done more than just appeal to the cuffed dickies/striped shirt culture that it has often been pigeonholed into with records like their 2015 release “Peripheral Vision.” The genesis of Turnover’s live performances is how the band’s sound lends itself to welcome a variety of different openers and headliners of any genre.

Bands like Men I Trust abolish the idea that the wiggly and imperfect world of indie-pop is a playground for cis men, making the work of larger artists like Mac DeMarco, who helped define the sound, obsolete and uninteresting.

To open the tour, Turnover brought out Renata Zeiguer, a Brooklyn-based singer-songwriter whose band’s energy kicked the show off with a truly unique and genre-bending performance.

Zeiguer’s sound is complex, implementing an appropriate level of quirkiness that is necessary for her intriguing and often irreverent songs to come through. Her most recent record, “Faraway Business,” was released earlier this year with Northern Spy Records.

Zeiguer’s talent isn’t only expressed through her captivating lyricism and keen ear for melody. The rhythm section was focused while Zeiguer and her lead guitarist brought crunchy leads and spaciousness that created a truly inspiring take on the “indie singer-songwriter” form.

The Canadian outfit Men I Trust was the first featured act of the tour, sandwiched between Zeiguer and Turnover. Men I Trust, who are also touring on their newest record “Oncle Jazz,” are one of the most interesting and provocative bands in the contemporary indie-pop world.

Fronted by Emma Proulx, Men I Trust’s sound is ethereal, with jazz-tinged and shaky instrumental performances that provide an appropriate bed for Proulx’s soft and understated vocals. Throughout the set, there was an air that felt thick as pads of ambient keys played with steady and to-the-point drums. The highlight of the band’s sound, however, comes from the inventive and groovy bass-lines on songs like “Numb” and “Show Me How,” which drive the songs and keep them interesting as they juxtapose the drawn-out and wiggly guitar sound that remains a constant through the band’s catalog.

Men I Trust ended their set with the resolution of a facetious feud between their guest bassist and guitarist Jessy Caron, in the form of the smashing of a bass before the guest bassist stormed off stage, leaving the band to finish the set with “Say You Can Hear.”

Bands like Men I Trust abolish the idea that the wiggly and imperfect world of indie-pop is a playground for cis men, making the work of larger artists like Mac DeMarco, who helped define the sound, obsolete and uninteresting.

Men I Trust and Zeiguer also display a level of empowerment through immense talent and creativity that seems to break down and rebuild how women exist in the world of indie and alternative music. These bands are no commodity nor are they a platform to be observed from a purely aesthetic standpoint. They are leading forces that have developed a truly new and unique sound that allows their music to be regarded as potent, urgent and necessary.

As Turnover took the stage, a flood of dreamy light cascaded over the audience accompanied by cheers and an air of excitement. Turnover opened the set with “Still In Motion,” the opener to “Altogether,” before breaking into a set consisting of a healthy mix of songs new and old.

There’s no words I can use to describe how much fun I had, it was insane.” -Roy Patton, Turnover fan

Turnover’s on-stage demeanor was different than it has been for the last several years. Lead singer Austin Getz shares his time between keyboards and acoustic guitar while the band backs him up in a presentation that feels dramatic yet appropriate for the band’s new direction. As the band led into “New Scream,” the second track off of “Peripheral Vision,” the audience’s excitement promptly turned into a mosh pit upon hearing the opening notes played by lead guitarist Nick Rayfield.

The steady groove of bassist Danny Dempsey and drummer Casey Getz remained a highlight and a driving force for Turnover’s set. The crowd began to loosen up, as newer songs such as “Plant Sugar” and “Number On The Gate” received the same mosh-treatment as classics such as “Take My Head,” “Super Natural” and “Hello Euphoria.”

Turnover ended their set with “Humming,” a sweet and contended number off of “Peripheral Vision,” before exiting the stage and engaging in what many audience members might consider the longest fake encore break ever. As the audience shuffled out of the theater, many turned their heads to watch the empty stage, waiting for the encore that never came.

“Altogether” is clearly a record that seems most appropriate played live. The energy of the crowd is necessary to turn the otherwise dry and relatively stagnant record into an experience that provokes further consideration of the record itself and, in this case, another listen. Still, Turnover brought the energy of a band whose time on the road has turned them into a consistently interesting and truly incredible act.

“You could tell as soon as the music starts, everyone went crazy,” said Izzy Amos, who was standing outside the theater with her friend Britney Mercer, another first-timer. “I like the new record a lot. I like the old stuff too just because it’s a little more emotional.”

“There’s no words I can use to describe how much fun I had; it was insane,” said Patton, sporting a Turnover shirt and clutching a copy of “Altogether” in his hand. “I was in the pit, deep. It was a blast.”

The purpose of Turnover’s sonic evolution is implemented within its live shows in a way that feels purposeful and natural. The band, now going on over a decade of touring and releasing music, appears to be at its most comfortable and confident. It’s clear that Turnover is not the band it used to be, but as fans continue to yell “Play ‘Sasha!’” between songs, fans seem to be okay with that.

For a show with three bands whose sound is largely reliant on vibrato-soaked major-seventh chords and jazz turnarounds over steady and occasionally sluggish tempos, each artist maintained a level of freshness and energy that kept the show fun and consistently interesting.