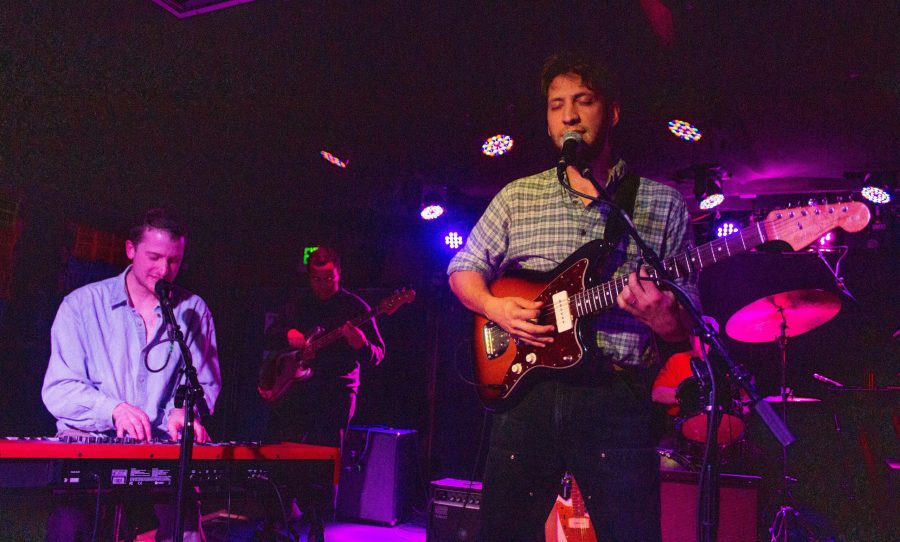 Charlie Martin and Will Taylor of Texas band, Hovvdy, perform at Larimer Lounge in Denver, November 24, 2019 (Monty Daniel | The Collegian)

Sitting in the bar area of Larimer Lounge in Denver, Will Taylor and Charlie Martin of the band Hovvdy sipped on tall cans of Montucky beer. Taylor and Martin were getting ready to play the last show of their North American Heavy Lifter Tour, and their excitement showed.

Steeped in southern hospitality, Hovvdy is a Texas band focused on positivity and togetherness. Having released their first EP on Bandcamp in 2014, Hovvdy has found different ways to expand their sound.

“I think our sound is a product of our musical interests, as well as our recording process,” Taylor said. “The limitations that we initially had led us to a sound that we formed, and we now do it in a way that’s a bit more opened up.”

The limitation Taylor refers to is their style of bedroom recording. None of the band’s albums have been recorded in a studio. Instead, they take a DIY approach and choose to record everything from the comfort of their home. On top of that, the band’s first few albums were mixed by them, but with their newest album, “Heavy Lifter,” they took a different approach.

Small moments end up being really impactful. An afternoon with someone that meant a lot can be a song. I think it’s really fun to make small moments large.” – Will Taylor, Hovvdy

Long-time member of the band Ben Littlejohn took the lead on mixing, engineering and producing the record.

“He has a good idea of the vision, so it wasn’t a stretch,” Taylor said.

On top of their new technical approaches, the band has been experimenting more with the sound and mood of their music.

“Early on, a lot of our songs were more cryptic, like the vocals are super hushed, and I think we were both a little less confident in our songwriting,” Martin said. “With this one, I just wanted to make … more plain-spoken and more accessible songs that potentially are more uplifting and make you feel good with positive messages.”

Their newest album has an overall more optimistic view and is more upbeat than their first few albums. They both emphasized that this album still leaves room for dark moments, which illuminate the bright tones on the album more.

The album art for “Heavy Lifter” helps to reflect the tone of the album, depicting a man with headphones on with his arms outstretched, looking up at a smiling moon-type figure.

“One thing I have found meaning in with the cover is opening yourself up, whether that’s spiritually or physically or emotionally, and looking upward,” Taylor said.

The artwork was created by Ben Johnson, who the band was planning to reach out to, when they found he had already messaged them that morning. They were immediately captured by the artwork and took Johnson up on his offer.

When it comes to finding inspiration for their music, they look for moments others may easily overlook. Spending time with friends and family sparks the most inspiration for them, as well as the everyday interactions they get to experience with people.

“Small moments end up being really impactful,” Taylor said. “An afternoon with someone that meant a lot can be a song. I think it’s really fun to make small moments large.”

Additionally, struggles in life help them create their most impactful work. Both Taylor and Martin work day jobs in addition to being musicians. Taylor works at a ramen shop in Texas, while Martin was most recently a barista. Although this doesn’t sound ideal, they prefer it this way.

“When life has harder elements, writing music is a release,” Martin said.

According to Martin, if they were full-time musicians, they would be more prone to burn out quicker.

With any relationship, there must be upkeep, and Hovvdy is no exception. This duo share similar goals for the project and tend to complement each other’s skill sets, but that doesn’t mean that everything is always perfect.

“Any relationship requires time, patience, flexibility and understanding,” Martin said. “Those are all things that we have to do in other relationships in our life, too.”

Especially when they are touring, they have to be careful to respect each other and their needs. Sharing the stage together has been a detriment to lots of other artists, but Martin and Taylor are collaborative technically and in spirit, which helps them navigate being artists together.

“Neither of us has to be the center of attention; we can share that,” Taylor said.

The main goal of Hovvdy is to promote positivity through both their music and their personalities. They strive to make genuine music that reflects on their lives and the people around them.

“If you write songs you believe in, it’s a natural reaction for other people to believe in it as well,” Taylor said.

Looking to the future, Hovvdy plans to begin recording more songs in January and continue to cultivate wholesome energy.

You can check out more of Hovvdy’s music on Bandcamp.

Monty Daniel can be reached at entertainment@collegian.com or on Twitter @MontyDaniel_.