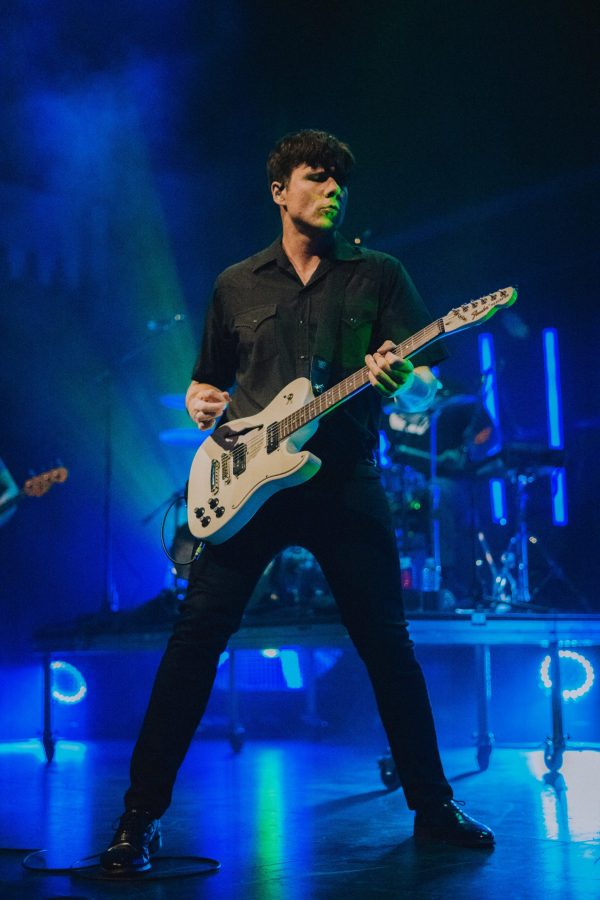 Jimmy Eat World, a staple in pop-punk music since the early 2000s, gave their fans a performance to remember this weekend, reminding audiences of the era we all remember so fondly.

For the first night of their “Surviving” tour, the band delivered a very special show for a sold-out crowd at Fort Collins’ Washington’s.

The band is touring in support of their 10th studio album of the same name, and fans were excited and surprised to see the band take the stage of one of Fort Collins’ newest venues.

Jimmy Eat World’s fanbase reaches across generations, evident by the diverse crowd of teenagers to 30-somethings and beyond. For over 25 years, Jimmy Eat World has established itself as a heavyweight in emo and alternative rock music, with their single “The Middle” being a staple in rock radio.

“It’s huge for them, and it’s huge for me because Jimmy Eat World (has) been a staple for a lot of young adults,” said Jared Diehl, a Fort Collins resident and a fan for nearly 20 years.

For fans of Jimmy Eat World, seeing the band at Washington’s was a truly special experience.

“I feel like whenever popular bands come to Fort Collins, I feel the need to come support them,” said Megan Rogers, a fan since college. “We want more here.”

For the “Surviving” tour, Jimmy Eat World brought Brooklyn-based pronoun, the stage name of singer and songwriter Alyse Vellturo. Pronoun drives her catchy pop songs with heavy and atmospheric synthesizers to create a brand of indie pop that feels refreshing and calls back to bands like New Order and Beach House. Pronoun released her first full-length album, “i’ll show you stronger,” in May of this year.

Vellturo and her band took the stage, donning brightly colored jumpsuits, accompanied by a bright neon sign that brought authority and an interesting aesthetic to the performance. The band was energetic, showing no signs of slowing down throughout the whole set. Thundering bass guitar paired with sharp percussion and dreamy guitars created an air of choreographed neon chaos that left fans surprised and thoroughly engaged.

“It’s huge for me because Jimmy Eat World (has) been a staple for a lot of young adults.” -Jared Diehl, Fort Collins resident

“We’re pumped; we’re ready,” McGuinty said with both fists in the air. “We’re ready to see Jimmy Eat World. It’s … obviously an amazing venue, and I can’t wait for the show.”

The response to Jimmy Eat World’s new album was overwhelmingly positive as well. “Surviving” is a passionate and emotional record that demonstrates the band’s ability to incorporate personal lyricism with their signature blend of alternative rock and power-pop.

“It’s awesome,” McGuinty said. “I’m ready for them to play (some newer stuff).”

Jimmy Eat World took the stage to thunderous applause from the crowd. Opening with the title track to their new album, “Surviving,” the band immediately engaged the fans, who were singing along with the new material as well as older songs.

For this show, the band played a healthy mix of favorites from across their entire career. “Bleed American,” “Lucky Denver Mint” and “For Me This Is Heaven” followed “Surviving.”

In a decided shift from the set so far, lead singer Jim Adkins reached for his acoustic guitar to play “Hear You Me” off of their album “Bleed American.” It was a moment of bonding between the band and the crowd, as everyone in the venue came together to sing the powerful and emotional ballad.

The song was written as a tribute to Mykel and Carli Allan, the founders of the Weezer Fan Club and fans of Jimmy Eat World. The two tragically passed away in 1997 after attending a Weezer show in Colorado.

The middle of the set saw songs from the album “Futures,” including the title track, “Pain,” and “Work.”  It also featured a fan favorite, “Blister,” off of their 1999 album “Clarity,” sung by guitarist Tom Linton.

Jimmy Eat World closed their set with “A Praise Chorus,” “Sweetness” and more favorites from “Bleed American.” The band exited the stage, leaving the audience in a deafening roar of cheers, and they returned to play a brief encore. The band’s encore included “Criminal Energy” off of “Surviving” and “The Authority Song” from “Bleed American.”

The last song of the night was a passionate and exciting performance of “The Middle,” the song responsible for bringing the band from cult status to alternative rock heroes.

Jimmy Eat World’s performance at Washington’s was one not just for the fans, but for the City as well. It demonstrated the power of community through music, something that Fort Collins is beginning to recognize as a staple of its culture, and it gave fans a truly special performance, the likes of which some haven’t seen in years.

The loyalty to Jimmy Eat World as seen through their fanbase was astonishing, and their music brings together generations of fans young and old to share the music of one of the most important bands of the last 25 years.