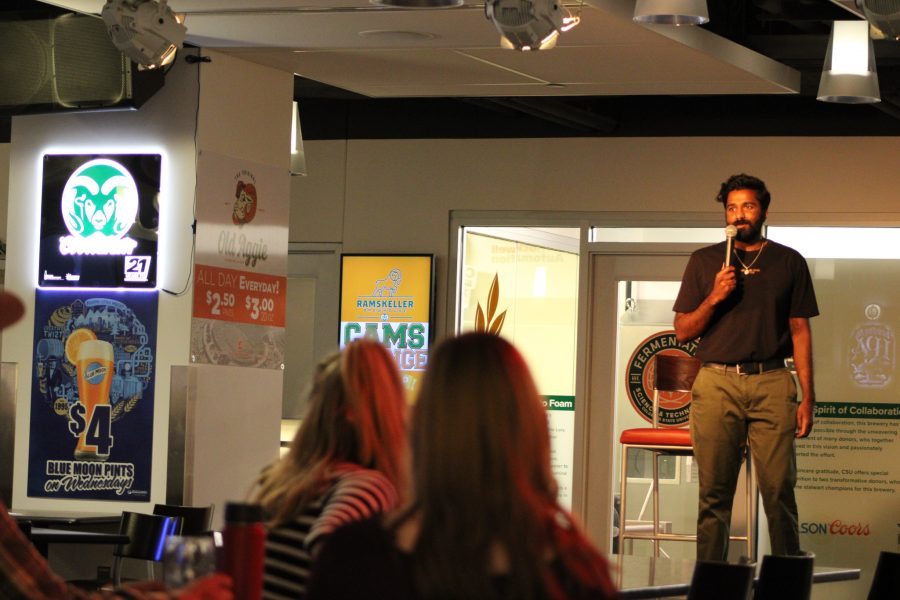 The Ramskeller hosts Open Mic nights once a month, as the second speaker of the night we have Bk Sharad. He has been doing comedy for a year. His favorite joke is, "Being a not smart Indian guy is like being an iPod touch." His reason for doing comedy is to make people laugh, that it brings him joy. (Asia Kalcevic | Collegian)

The Ramskeller open mic, held Tuesday in the basement of the Lory Student Center, was a no-holds-barred roast of everything from totally baked black bears to homeless people in grocery stores and plenty of cringe and controversy to fill the space in between.

Hosted by former Ram Eeland Stribling, the night featured a variety of performances from comedians heralding from all the way from Denver to right here in Fort Collins, highlighting the vast, diverse and unique comedic voices from across the state.

“Fort Collins has one of the best comedy scenes in the state, tied between Denver,” Stribling said, adding in hushed tones that the Fort Collins scene is “maybe even a little better than Denver. It’s a great scene, (with) very engaged audiences and a lot of great comics.”

(Comedy is) a celebration of all the nasty, messy parts of human nature that pristine society shies away from, and the Fort Comedy crowd embraces this, not just in the stories they tell, but in the way they tell them.”

Indeed, many people may not yet know it, but Fort Collins is currently in the process of developing itself into one of the nation’s leading comedy hubs. It’s one to rival Chicago, which is in large part due to its housing of the comedy group Fort Comedy, with which a bulk of the performers at Ramskeller are involved.

The group may still be on the fringes of the comedy world, but it’s slowly and steadily building up its repertoire. And if the performances at Ramskeller are any indication, when it does finally slip into the mainstream, it’s going to absolutely bust America’s gut.

The comedic styles on display are diverse and confrontational, just like the wild western state from which they hail, fusing the hip, groovy tone of budding urban hotspots like Denver and Boulder with the more relaxed, old-fashioned taste one finds in Northern Colorado and the eastern plains. It’s a difficult blend to pull off, and even more difficult to make palatable to a wide audience, but these comics pull it off with charm and ease.

The evening certainly had its ups and downs. It wasn’t an endless onslaught of perfect zingers, but comedy rarely is. However, part of the event’s charm lies in the performers’ ability to bring a kind of light-heartedness to the atmosphere, which acts as a pleasant cushion for the audience (and comedians) to land on should a joke go south.

And this is really what sets professional comedians apart from amateurs: the ability to empathize with their audience and encourage their audience to empathize with them. After all, we don’t go to see comedians to be taught a lesson or talked down to. We go to remind ourselves that our flaws, the parts of ourselves that make us cringe and that we spend our whole lives suppressing, aren’t anything to be afraid of because they’re universal.

The Ramskeller/Fort Comedy crew understands this, and so they don’t attempt to gloss over the flaws — even when those flaws occasionally show through in the act itself.

“(My favorite parts of the show were) the parts where they weren’t rehearsed, and they were messing up, and it was raw and real,” said audience member Dreana Hardy. “It was … authentic and organic, and it only happens when you see a live show.”

The Ramskeller open mic was no pristine Netflix special, but comedy isn’t a pristine art form. It’s a celebration of all the nasty, messy parts of human nature that pristine society shies away from, and the Fort Comedy crowd embraces this, not just in the stories they tell, but in the way they tell them.

They bring their notes on stage, they make jokes when their jokes fall flat and they bring on their rough, raw material and spit it out with confidence because they understand that’s what makes life fun and funny. It’s not the destination, but the wacky, messy journey that gets us there.

“I think (comedy) brings light to pain, in a weird way,” said comedian BK Sharad. “A lot of comics that I talk to, and myself, we’ve been through a bunch of stuff, and it brings light to that and (relates) to other people, so (they) can hear you and be like, ‘Oh, interesting, I had something like that happen to me.’”

Although still in its budding phases, the Fort Comedy crew has big plans for the near future, with plans to open up a new club in Old Town in the upcoming months. Until then, the Ramskeller comedians can be seen around town at Hodi’s Half Note open mics Mondays at 7 p.m, The Whiskey on Wednesdays at 8 p.m and Scrumpy’s on the last Friday of every month at 9 p.m. Their next Ramskeller show will be Nov. 12 at 5 p.m. in the LSC.