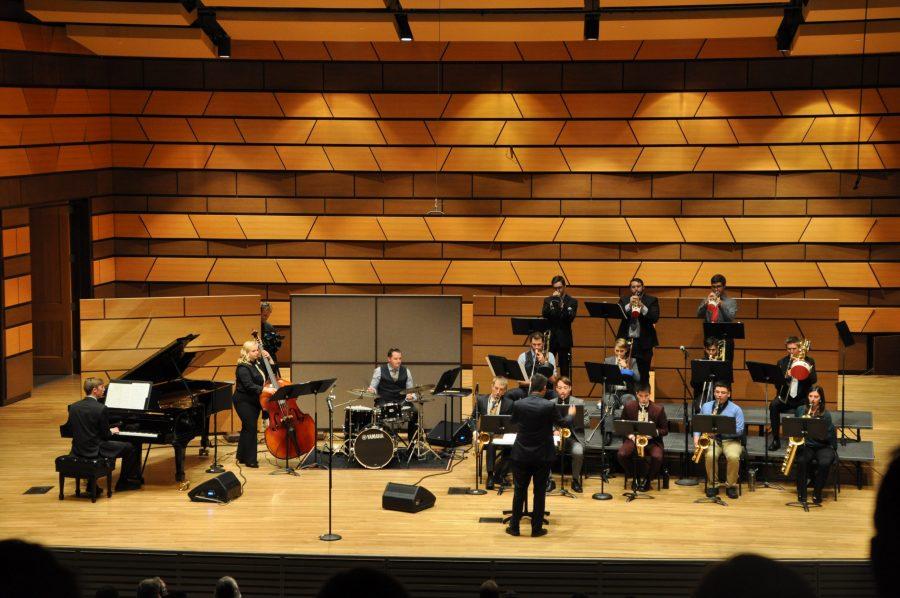 As part of Colorado State University’s Homecoming week, the University Center for the Arts hosted the “Jazz Ensembles Concert: The Mirror Through Time” in the Griffin Concert Hall Thursday, Oct. 3.

The presentation featured an ensemble concert played by students and special guests, conducted by CSU music instructors Wil Swindler and Shilo Stroman. Without any delay, Swindler immediately launched the concert into “Stompin’ At The Savoy” by Edgar Sampson.

(It was) fantastic, exciting, a little different (and) a little weird but fantastic nonetheless.” -Music Major Markus Fagerberg.

Swindler continued his session with “All of Me,” originally written by Gerald Marks and Seymour Simons; “April in Paris” by Artie Shaw; “Black Orpheus,” also known as “Manhã de Carnaval,” created by Luiz Bonfá; and “Four Brothers” by Woody Herman.

To reflect jazz’s history of remixing, recomposing and reinterpreting songs by other artists, the second part of the concert, composed by Stroman, showcased multiple compositions of the same songs, such as when the Bill Holman and Bob Graettinger versions of Glen Gray and the Casa Loma Orchestra’s “You Go to My Head” were performed.

During Stroman’s half of the show, he conducted Benny Goodman’s “King Porter Stomp,” as well as two versions of “Sing! Sing! Sing!”

“I really enjoy jazz, and specifically the atonal stuff was really interesting to me, so I’m interested to hear what they’re presenting next time,” music major Natalie Morris said.

(The students) did great; it takes a lot of work to put these things together,” -Shilo Stroman, CSU music instructor.

The concert was performed by CSU students with special guest features, including Jeff Jenkins, a jazz pianist and teacher at the University of Colorado Boulder.

“(The students) did great; it takes a lot of work to put these things together,” Stroman said. “But then we come in under the pressure of a concert hall and then we see how they’re going to do, and they played great.”

The show highlighted a variety of jazz, from the energetic and bombastic to the more serene bossa nova, which is a Brazilian fusion of jazz and samba. It even included the odd-sounding, such as Graettinger’s version of “You Go to My Head.” The show highlighted how much of an effect a slight reinterpretation of a song can have.

“(It was) fantastic, exciting, a little different (and) a little weird but fantastic nonetheless,” music major Markus Fagerberg said.