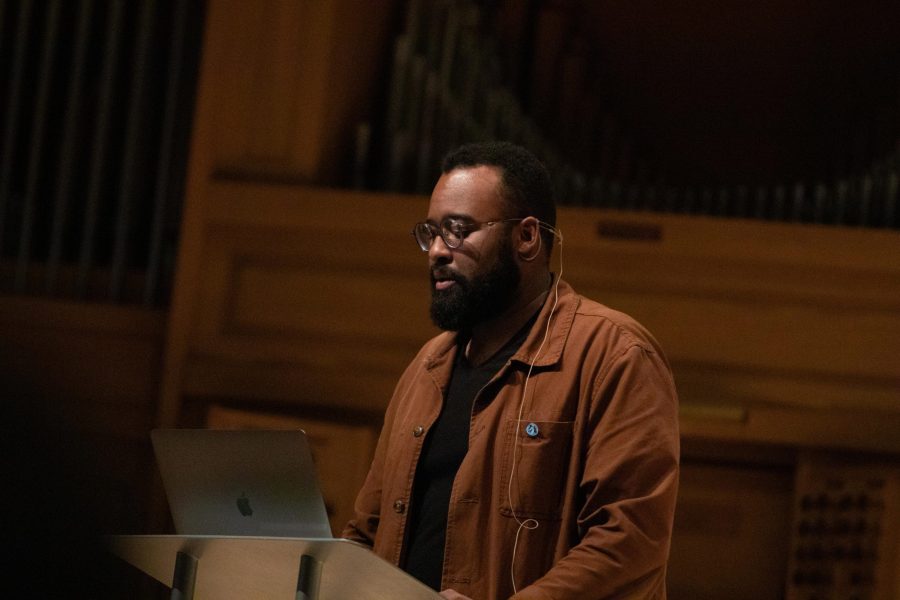 Talking about race and racial violence can be uncomfortable and difficult for some. It’s tough to do it in a way that is accessible to everybody while still being respectful to those who have experienced it. It’s tougher still to convince people that this brutality isn’t all in the past.

Photographer, artist and educator Zora Murff took on this challenge through his exhibit, “Remaking the Mark,” at the University Center for the Arts. He spoke to attendees to commemorate the closing of his exhibit and spark a conversation on the themes he covered through his work.

During his presentation, he spoke about images he had captured and picked out of history in addition to the experiences he had collecting them, deliberating on the history of oppression and violence that Black individuals have faced in the United States.

Murff compared the more overt “fast violence” of lynchings, using historical images of crowds taking a role in the death of another human being, to his own research in the process of redlining, a “slow violence” that presses minorities into poverty and keeps them there by denying them services that could provide a pathway to a better life.

The talk opened with a description of Murff’s internal monologue as a child returning home to find that a man had been killed in an act of racially-motivated violence. Murff directly connected this to his thoughts following the shooting of Laquan McDonald by Chicago Police Officer Jason Van Dyke.

“Before that was reported, that violence, and that oppression, and that injustice was only reserved for the communities that these things were being done to,” Murff said. “The world had to know. The conversation shifted from ‘That’s just your problem’ to ‘It’s now everyone else’s problem.’”

The talk was designed not only to bring attention to these moments in history — but also to realize that the echoes of this violence are not entirely gone and that this oppressive violence is not always obvious.

During his talk, he showed the lead-up to the shooting as captured on a police dash cam, though he did not show the actual shooting. In the photos from the archives in which lynchings were captured, he blurred or cut out the bodies.

“I believe that these images are important to see,” he said. “But I also believe that everyone has a right to choose if they want to look.”

“The impact here has the potential to be particularly concrete,” said Lynn Boland, director of the Gregory Allicar Museum of Art in the UCA, where Murff’s work was exhibited. “This exhibition in particular continued to give me something new every time. ‘Remaking the Mark’ is challenging, purposely so, but it’s a challenge that is more than worth the effort.”

“Sometimes (a person’s) presence at events like this can say a lot about … (how) there’s some things that they’re not really sure about and want to learn more about,” said Regina Henson, a probation officer from Boulder County who attended the talk and gives diversity training as part of her work. “(This) can in turn help them have a better understanding and maybe share it with other people. It’s kind of like a ripple effect.”

It’s easy to see racism as something that really only existed in the past, with lynchings and the throwing of slurs, but Murff argues that this is an unhealthy way of looking at things. The Southern Poverty Law Center tracked 1,020 hate groups in 2018, many of which hold racist or anti-black sentiments.

“When bad things happen, we like to use the phrase ‘This isn’t us,’” Murff said. “But this has always been us.”

Murff didn’t shy away from how personal his work got or from the fact that it covers tough subjects. He wanted to make the audience think and ask questions about a society that they may have taken for granted as fair for everybody within it.

When bad things happen, we like to use the phrase ‘This isn’t us.’ But this has always been us.” -Zora Murff, curator of “Remaking the Mark.”

During the discussion portion of the talk, one audience member asked: What do we do about a society which categorically denies certain members of its population equal status and equal treatment?

“It’s such a hard question to answer,” Henson, another audience member, said. “Even as an African-American woman, I don’t know what to do. My question to you would be: ‘Why are you here, what are you taking away from it, and what would you like to do?’”

“At No Point In Between,” the book based upon Murff’s exhibit, has recently been published and is available for purchase online.