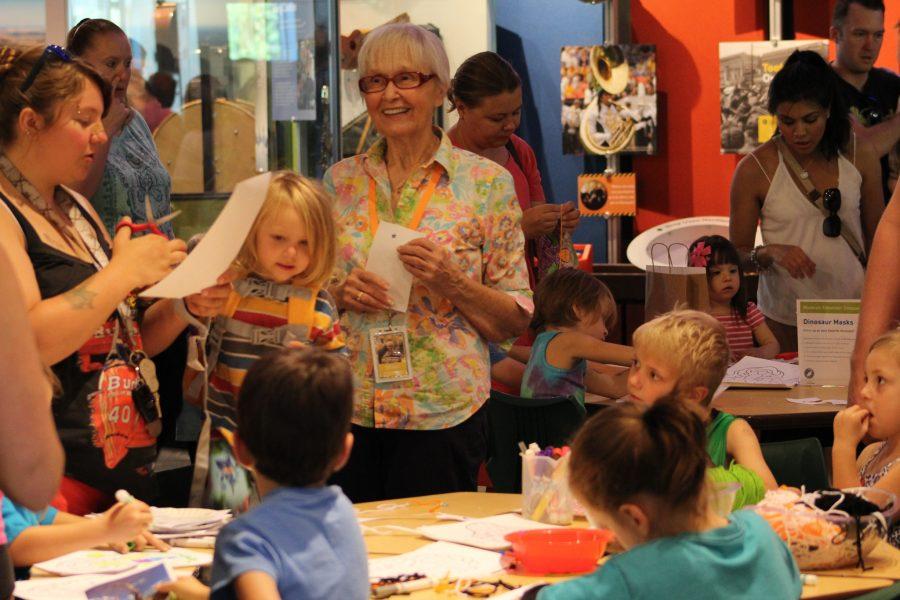 Children and parents gather around the Fossil Pendants station during the Dinosaur Takeover at the Fort Collins Museum of Discovery on September 14th, 2019. (Megan McGregor | Collegian)

The “Museum Takeover: Dinosaurs” event welcomed locals for all sorts of antics, including the chance to speak with paleontologists, hands-on experience with fossils and artifacts, dinosaur themed crafts and other educational activities.

“With the museum takeovers, we like to choose one topic and have activity stations all around the museum where people can learn about the important parts of each subject,” said Public Programs Coordinator Charlotte Conway.

Volunteers made up the majority of the workers for the event, which helped the Museum of Discovery use their money to make the dinosaur takeover a fun, educational experience for children and parents alike.

“Our intended age range is 6-8,” Conway said. “But what’s really cool about our activities is that there’s two levels of engagement: one that’s engaging for children and one that’s better for adults.”

Some points of interest for adults were the chance to speak with a paleontologist from the Western Interior Paleontological Society, get hands-on experience with fossils, receive educational lessons about dinosaurs and talk with animal handlers.

Kids were treated to all sorts of activities, from crafting fossil pendants to simulated archaeology excursions. The event offered more than just a fun time — it offered an incentive for kids to learn.

“We designed it so that people moved through each station and earned stickers for doing activities,” Conway said. “That way, when they come back at the end, they earn a prize. … They’re getting into this phase of life where they’re learning that concrete actions can lead to rewards.”

Going to something like this is fun and beneficial, and as a parent, you rarely get both.”-Michael Nelson, father of two at the dinosaur takeover.

The intention behind the activities was to teach kids in a way they don’t usually experience. Most of the events were manual and offered kids kinesthetic experiences they don’t get in the classroom.

“It’s more engaging when it can be hands on like this,” said volunteer and Colorado State University microbiology student Kimberly Shelton. “You can tell these kids are excited to do these activities, and it’s not just another school day listening to a teacher lecture.”

The Western Interior Paleontological Society is a non-profit membership based organization with a combination of amateur and professional paleontologists. The museum also worked with Colorado Movie Cars and Fort Collins Comic Con to bring out a “Jurassic Park” Jeep and dinosaur costumes, respectively.

“I like (how) it makes learning easy for the kids,” said Michael Nelson, who brought his two children to the dinosaur takeover. “Going to something like this is fun and beneficial, and as a parent, you rarely get both.”

Joel Thompson can be reached at entertainment@collegian.com or on Twitter @probably_joel.

Editor’s Note: The group collaborated with for the Jurassic Park Jeep was ‘Colorado Movie Cars.’