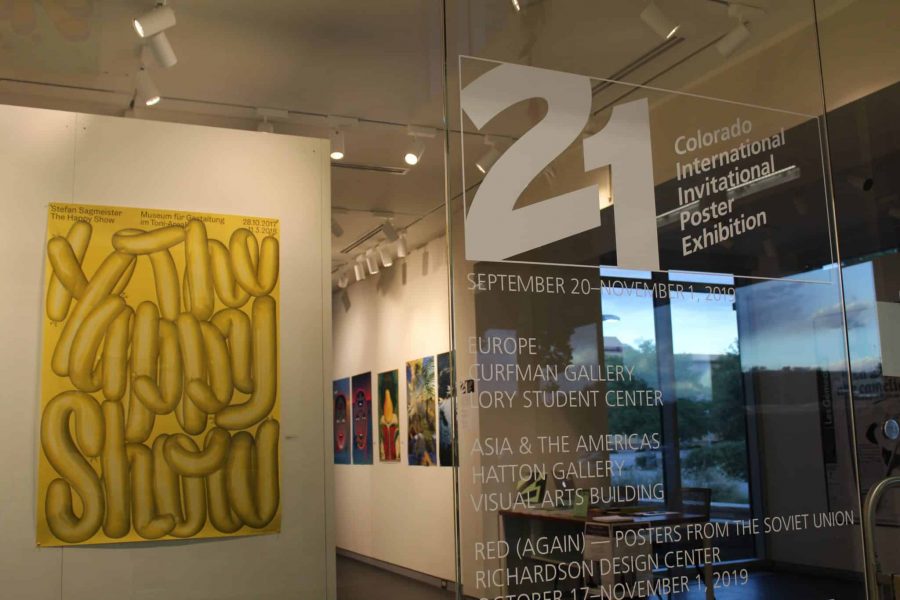 An international variety of thought provoking posters line the walls of Curfman Gallery in the LSC Friday evening, Sep. 20. The posters were a part of the 21st biennial Colorado International Invitational Poster Exhibition(CIIPE), an art collection from the world’s most distinguished poster artists and designers hosted by CSU’s Department of Art and Art History. (Alyssa Uhl | The Collegian)

The Colorado International Invitational Poster Exhibition opened for its 21st installation on Sept. 20, once again challenging perceptions of graphic art and how it relates to life across the globe.

CIIPE is a biennial art show hosted at various galleries around campus, and it features artist talks and special events. Held since 1979 by Colorado State University’s department of art and art history, the show features a pool of acclaimed graphic artists from all over the world. This year’s exhibition represented 70 artists and 25 countries.

“I learned about the show back when I was looking for an art school,” said Heidi Leech, an alumna of the department. “The poster show was a big reason why I chose Colorado State. It covers cultural and political stuff and transcends language.”

The art pieces utilize the popular medium of graphic design to portray powerful statements that hold universal meaning to different people and cultures. The simple display at the Lory Student Center’s Curfman Gallery highlighted each of the artists’ unique stories in an accessible way.

“We don’t exhibit them as you would a normal exhibition where you may put something in a frame or behind glass,” said Jason Frazier, co-director of the event and assistant professor of graphic design at CSU. “We pin them to the wall with push pins. They are the object of immediate understanding and immediate communication, so we try and treat them like the type of temporal object they are in a way.”

“With everything that’s going on with the cultural and political climate on campus, I think it’s important for us to step back and realize we aren’t the only people in the world, and we need to experience more diversity. It puts things in perspective a little bit.” – Audrey Weiss, Curfman Gallery employee and journalism major

“(Art) is among the most important things,” Loiri said. “I think we couldn’t survive without the touch of art, without the connection with art. The connection of the surround, which is built by human hands.”

Beginning as a learning experience for students in the department of art and art history, CIIPE quickly became a revered event to other departments on campus as well as in the community. According to CIIPE curator and graphic design professor John Gravdahl, it is important for students to have first hand experience with the important works.

CIIPE can be experienced at the Curfman Gallery and the Gregory Allicar Museum of Art until Nov. 1.

“There are other esteemed and important exhibitions, and some of them have an educational component to them, but none of them I know of are attached to one specific program like CSU,” Gravdahl said.

According to employee at the Curfman Gallery and journalism student Audrey Weiss, it is especially important for everyone on campus to experience the international gallery at this time.

“I think it’s awesome that we have this exhibit, especially going up right now,” Weiss said. “With everything that’s going on with the cultural and political climate on campus, I think it’s important for us to step back and realize we aren’t the only people in the world, and we need to experience more diversity. It puts things in perspective a little bit.”

The posters displayed at this year’s exhibition can be purchased for $40-$80. In addition, the posters from the last 11 years of CIIPE exhibitions can be viewed at the CSU database.

Editor’s Note: Audrey Weiss was a former writer at The Collegian.