Prince Daddy & The Hyena cause chaos at Lost Lake 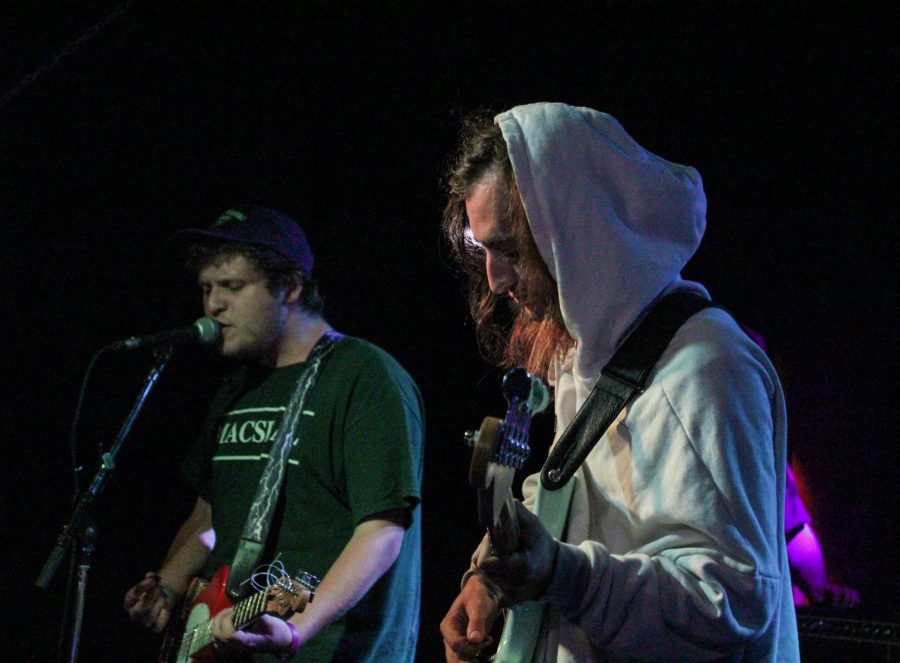 Prince Daddy & The Hyena displayed the full extent of their chaotic nature and put on one of the best live shows of this year at Lost Lake Lounge in Denver on Aug. 21.

Coming off of their latest album, “Cosmic Thrill Seekers,” Prince Daddy & The Hyena went on their first headlining tour. Supporting them for their American tour was Kississippi, The Obsessives, Oso Oso, Pictures of Vernon and numerous local acts.

Prince Daddy & The Hyena are a punk band from New York consisting of the lead singer and guitarist Kory Gregory, guitarist Cameron Handford, Zakariya Houacine on bass and Daniel Gorham on drums.

When asked to describe their sound for those who haven’t heard them, Sam Kless, a friend of the band and lead singer of Just Friends, recalled a story from an earlier stop.

“I like (Handford’s answer) from the hardware store yesterday, when they asked, ‘What kind of band are you?’ ‘Oh you know, we sound like Prince Daddy & The Hyena,'” Kless said.

Prince Daddy lived up to their promise of chaos, ripping their way through over 20 songs in what felt like mere minutes. Among the set was the entirety of the album CTS. One of the most satisfying parts of the concert was the perfectly-executed transitions, with nearly the same quality as the studio-recorded album. Listening to CTS after seeing it performed live gives the album a new feeling: an indescribable connection to an already personal album.

After the release of their latest record, Prince Daddy seems to be on the rise and gaining momentum.

“It’s been pretty great,” said Jake Sulzer, Prince Daddy’s manager and founder of Counter-Intuitive Records, “I feel like with the first record they showed that they were a band that was gonna try to take this seriously.”

“They showed that not only are we taking this seriously, but we’re also really f*cking good at what we’re doing. They’re finally showing that they weren’t just lucky,” Sulzer added.

According to Gorham, every show on their tour has been the best in the city thus far and Denver’s crowd certainly lived up to the expectation of the shows before. They followed Prince Daddy’s energy perfectly, except maybe after the 20th song. But who can blame them from getting worn out by the constant mayhem the band has so well-rehearsed?

Many times, punk bands have a decrease in quality when performing live; however, Prince Daddy’s music comes to life when the band is on stage. More emotion resonates through their lyrics and instrumentals, making for a must-see show. Even the most casual Prince Daddy fans need to see them live. It’s worth the inevitable soreness and sadness that comes with the following days.

Joel Thompson can be reached at entertainment@collegian.com and on Twitter @probably_joel.