Lego Creation Festival puts together day of design for all ages 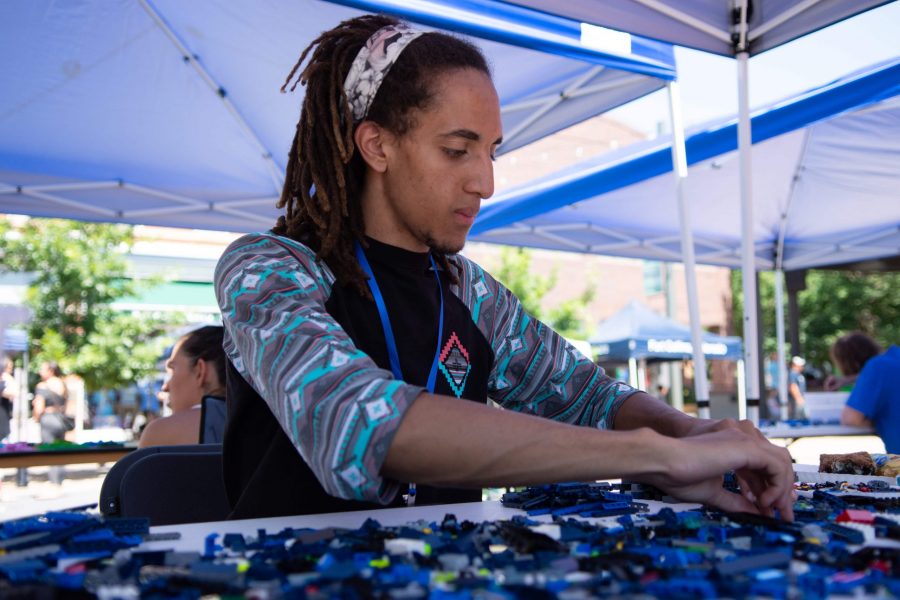 LEGO Artist Osi Ogbuji, begins work on his futuristic vision of the city of Boulder and the Flatiorns at the first LEGO Creation Festival held by the Downtown Development Authority on July 20. Ogbuji placed 2nd with his piece and found out about the competition through the Denver LEGO Users Group. (Matt Tackett | Collegian)

On Saturday, Old Town Square hosted a competition of engineering prowess. Hours went by as the architects built up their creations brick by brick, preparing for a panel of judges. Their medium of choice? Lego bricks, the famous children’s building toy.

Judging by the attendees of the Lego Creation Festival, calling the bricks a children’s toy may be selling them short. Children and families worked to create colorful and fun representations of the theme “Colorado,” but nearby, adults were hard at work on their own creations.

“The inspiration came from my son, who’s crazy about Legos,” said Amanda DeAngelis, a subcontractor for the Downtown Development Authority who helped to organize the event. “I think that Legos are an art medium; I think they’re engineering; I think they’re toys, so I think they appeal to a wide range of ages.”

Clothes Pony and Dandelion Toys offered a free build booth for passersby to come in and build using a huge assortment of Legos. Adults and children alike were able to stop by and play for a few moments before moving on.

Explaining the appeal of these simple pieces of plastic to a wide variety of demographics isn’t as simple as a single attribute. Much like the bricks themselves, multiple pieces come together to create something more.

“There’s something attractive about the color and the texture and the idea that you can just pick this up and make anything you can imagine,” said Lea Mikkelsen, who works with Clothes Pony and Dandelion Toys in Old Town and was one of the judges for the event. “I think it appeals to children and adults.”

“(Kids) have ownership over Lego building,” said Sarah Weeks, a former educator with the Poudre School District who has recently moved onto working with the Ottercares Foundation, a charitable group investing in education and other nonprofits. “In school, kids don’t often feel like they’re in charge, and we’re trying to change that. But I think it’s that ownership — that voice and choice to express their voice and choose what they’re doing.”

Each category was judged on its own merits and had an identical set of bricks to work with. Kids got about 800 pieces, and families were given about 900, but adults were given a real challenge with just over 1800 pieces, more than double the other categories.

Adding onto the challenge was the fact that the participants were essentially going in blind. They had a chance to check out the sets a few days earlier, but for the most part, they were forced to plan on the fly.

“They were not able to plan ahead of time,” Mikkelsen said. “The earlier they checked in the better. They were able to come at 10 a.m. and see what pieces they had and start planning and sorting their pieces.”

“I think it was just figuring out the parts that I knew would be really hard to use,” said Ryan Howerter, a builder who created a scene of a Lego minifig (the technical name for the iconic “Lego guys”) camping in the woods by a creek. His build came complete with a mechanism around back to make the trees “sway” in the wind. He pointed out how he was given some domed pieces, which made up the trees. “Everything else came from that.”

The theme also prompted re-creations of Red Rocks, the Eisenhower Tunnel, creative mining companies steeped in Coloradan history and a futuristic version of the famous Horsetooth rock with an elevator headed to the top.

Judging the builds was a complicated affair, and to an outside observer would seem largely subjective. The judges had to create a four-point scoring system consisting of creativity, how they executed the theme, whether the build was interesting from an engineering perspective and intentional use of the pieces provided.

There’s something attractive about the color and the texture and the idea that you can just pick this up and make anything you can imagine.”

Using every single piece was unrealistic, but the judges were more inclined to give more points to complicated builds. That being said, the creative use of blocks was necessary. Filling empty space was a big problem for landscape scenes.

“Some of the bricks are literally just sitting there,” Howerter said, pointing out a block he used to fill a gap by slotting it in sideways. “They’re not connected to anything.”

Winning the adult competition was a 1-foot-tall recreation of “Blucifer,” the huge, terrifying, red-eyed blue mustang that greets visitors to Colorado at Denver International Airport and famously killed its creator after a chunk of the sculpture dropped onto him. Despite the risk of stepping onto an errant brick, the artist behind this replica went unharmed.

In total, the competition lasted around five hours. This included four hours of building time and an hour for the judges to make their way around and take a look at the creative endeavors that the participants got themselves up to.

Some other attractions for passersby to check out included impressive Lego creations offered up by the community, including a 3-foot-tall Creeper from Minecraft.

“We had a huge response, a huge number of registrants,” DeAngelis said. “I think that what we’re going to do if it continues is make it larger so we can include more participants.”